Andrew Pike captures the greatest maritime rescue in South African history in Against All Odds: The Epic Story of the Oceanos Rescue
More about the book! 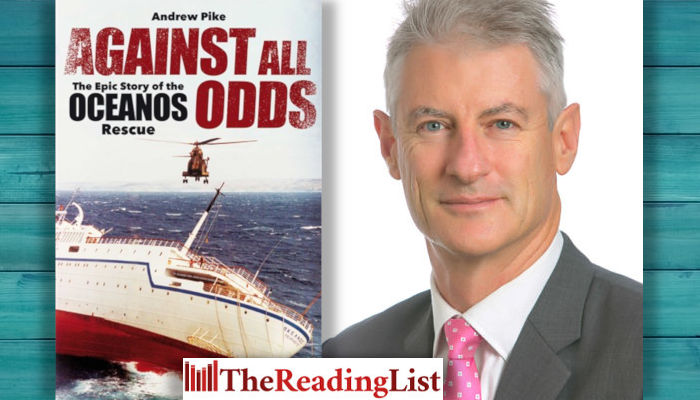 ‘Recording the time as 12.05 am and date as 4 August, musician Moss Hills added calmly: “So I guess we’re going down”.’

In August 1991, excited holiday-makers boarded the Oceanos at East London for the trip of a lifetime. Despite treacherous weather, the captain ordered the ship to set sail for Durban. And so began the ill-fated voyage.

Hurricane force winds and giant rogue waves aggravated the hostile storm. Soon the ship started taking water. Panicked senior crew members scrambled into lifeboats leaving the ship’s evacuation to the on-board entertainers. At one point, a musician manned the bridge, at another, a magician.

Women and children clambered aboard lifeboats which were launched into terrifying seas, leaving their husbands behind, unsure if they would see each other again. After all the operational lifeboats had been utilised, 221 passengers and junior crew were left stranded on the rapidly sinking ship.

During this catastrophe, the South African Air Force embarked on their biggest air rescue ever, with helicopter crews and SA Navy divers risking everything to evacuate the remaining passengers.

In Against All Odds, maritime lawyer Andrew Pike, who was part of the legal investigation into the Oceanos sinking, recreates the compelling drama and extraordinary heroism of the greatest maritime rescue in South African history.

‘Andrew’s story portrays why the Oceanos can be called a miraculous rescue.’ – Captain Nicholas Sloane, salvage master of the Costa Concordia

Andrew Pike is one of the most senior maritime lawyers in South Africa, with over 30 years’ experience in the industry. He is the head of law firm Bowmans’ ports, transport and logistics sector. Pike is a past president of the Maritime Law Association of South Africa and past board member of the Ports Regulator of South Africa. He is the author of two books, People Risks: A People-based Strategy for Business Success and The Talking Stick: Exploring Life’s Possibilities. In his free time, Pike is a blogger, avid photographer and traveller. He lives in Durban.