An intimate look at one man’s relationship with the American people – To Obama: With Love, Joy, Hate and Despair by Jeanne Marie Laskas
More about the book! 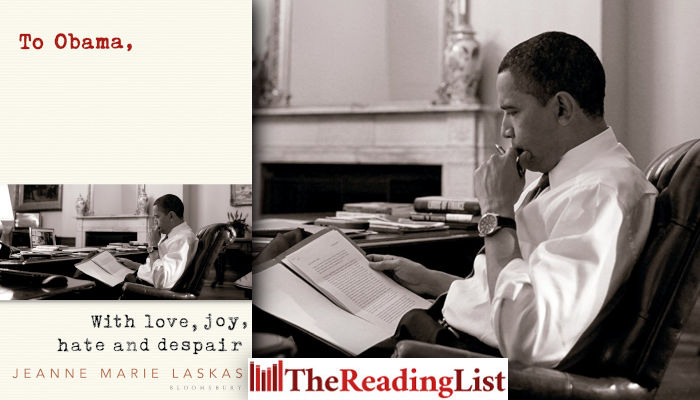 To Obama: With Love, Joy, Hate and Despair by Jeanne Marie Laskas – one of the most important politics books of the year; a record of a time when politics intersected with empathy.

Every day, President Obama received ten thousand letters from ordinary American citizens. Every night, he read ten of them before going to bed. In To Obama, Jeanne Marie Laskas interviews President Obama, the letter-writers themselves and the White House staff in the Office of Presidential Correspondence who were witness to the millions of pleas, rants, thank-yous and apologies that landed in the mailroom during the Obama years.

There is Peggy, a patriotic grandmother who thinks the President is trying to lead the country into socialism and recommends that he read the Constitution; Bill, a lifelong Republican whose attitude towards immigration reform was transformed when he met a boy who escaped MS-13 gang leaders in El Salvador; Jordan, a seven-year-old about to be adopted, who wants to thank the President for keeping him safe; James, who on the morning after the 2016 election tells the President to start packing; and Dawn, who writes to say that he made it possible for a very jaded generation to begin to hope and believe in the good.

They wrote to Obama out of gratitude and desperation, in their darkest times of need, with anger, fear and respect. To Obama is an intimate look at one man’s relationship with the American people, and at how this extraordinary dialogue shaped an era-defining presidency.

A moving and inevitably nostalgic or even elegiac read, redolent of the human grace and statesmanship of the Obama presidency … A beautifully researched and written book.
– Observer

[A] startling, delicate and immensely readable story … Another poignant reminder of what once was.
– Telegraph

Alternately heartbreaking and hopeful, angry and questioning – the empathetic, often poetic, polar opposite of the Trump twitter feed.
– Vogue

Jeanne Marie Laskas is the author of eight books, including the New York Times bestseller Concussion. She is a contributing writer at the New York Times Magazine, a correspondent at GQ and a two-time National Magazine Award finalist. Her stories have also appeared in the New Yorker, the Atlantic and Esquire. She serves as Distinguished Professor of English and founding director of the Center for Creativity at the University of Pittsburgh, and lives on a farm in Pennsylvania with her husband and two children.

South Africa remains the most unequal country in the world – Confronting Inequality: The South African Crisis

Thinking about giving a vegan diet a try for Veganuary? Check out The 28-Day Vegan Plan by Kim Julie Hansen

Class Action: In Search of a Larger Life – Charles Abrahams’s remarkable journey of resistance and healing