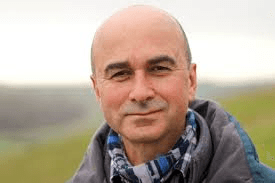 Philip Lymbery, author of Farmageddon and Dead Zone, will be in South Africa in July.

Lymbery will visit Johannesburg and Cape Town from 10-14 July. Keep an eye on The Reading List for more event details.

‘A critical plea for a fusion of farming, food and nature to provide global ecological security’
– Chris Packham

Philip Lymbery is the CEO of leading international farm animal welfare organisation, Compassion in World Farming, and a prominent commentator on the effects of industrial farming.

Compassion in World Farming was founded in 1967 by a British dairy farmer who became horrified at the development of intensive factory farming. Today Compassion is the leading farm animal welfare organisation dedicated to ending factory farming and achieving humane and sustainable food. It has well-known supporters such as Joanna Lumley OBE, founder of Forum for the Future Jonathon Porritt, Peter Egan, and Jane Goodall DBE. 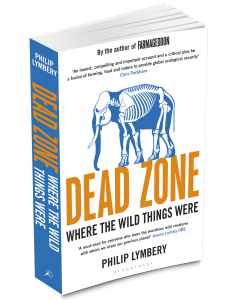 Dead Zone takes the reader on a journey around the world, travelling from the rainforests of the Amazon to the Midwest plains of America; the palm plantations of Sumatra to the volcanic diversity of Galapagos; the grasslands of England to the Malaysian jungle.

In a global safari focusing on some of the world’s most endangered species, it exposes a little known but key factor in their demise: the cheap meat on supermarket shelves.

This sequel to Farmageddon lays bare the myths that prop up factory farming and shows what we can do to save the planet with healthy food. 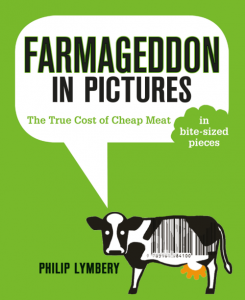 What are we eating?
Where does it come from?
And how much does it really cost?

Farmageddon in Pictures is the infographic edition of 2015’s best-selling Farmageddon – delivered in handy, bite-sized pieces. Stuffed full of interesting infographics and facts, it asks all the important questions. Because what are the consequences of putting profits before people?

Is the Farmageddon scenario – the death of our countryside, new diseases and billions of starving people – inevitable? Could there be a better way?