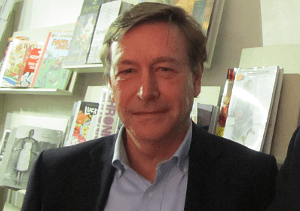 Pan Macmillan South Africa is delighted to announce it will publish the debut novel of award-winning author Peter Harris. The book will be released in South Africa in October 2017.

The narrative revolves around Max Sinclair, the CEO of Wits Mining, who is in the process of selling 25 per cent of the company to a consortium. As the deal-making gathers pace there are casualties on all sides as corporate and political intrigue spiral, and Johannesburg reveals its true colours as a gritty mining town. The novel is an acerbic exploration of post-apartheid South Africa, with a particular focus on the deepening corruption and cronyism that is threatening the country’s long-term development.

Harris has gathered many accolades for his non-fiction writing. In a Different Time: The Inside Story of the Delmas Four was awarded the prestigious Sunday Times Alan Paton Award as well as the Booksellers’ Choice Award in 2009. He is also the author of the best-selling Birth: The Conspiracy to Stop the ’94 Election. Harris was born in Durban and moved to Johannesburg after qualifying as a lawyer. In the early 1990s, he was seconded from his law firm to the National Peace Accord. Thereafter, he was seconded to head the Monitoring Directorate of South Africa’s Independent Electoral Commission for the 1994 election. He currently practises as a lawyer.

Harris says: ‘In a Different Time was a book about the 1980s, and an extraordinary treason trial. It also chronicled the huge sacrifices that were made to bring about democracy in South Africa. My second book, Birth, was about the transition in the early 1990s and the extreme challenges that the country encountered in getting to and conducting the 1994 election, in the face of significant odds. This novel, located in the cauldron of Johannesburg, is about the society we have become.’

Terry Morris, Managing Director of Pan Macmillan South Africa, says: ‘It is such a privilege for Pan Macmillan to work with an author of Peter Harris’s calibre. Peter is well known for his non-fiction writing, but our team was instantly hooked by the storyline and characters of his debut novel and we look forward to sharing this gripping book with readers.’

Acclaim for In a Different Time

‘A stunning book … Harris set out to write a historical thriller and succeeds with aplomb … Descriptions of prison visits, legal procedure and political developments could have been dry and dusty in the hands of a lesser author. Harris blows the cobwebs away and makes this a pacy courtroom drama, weaving in a compelling strand that follows the construction and journey of a bomb to its shocking destination. This is also a page-turner with a heart. Harris is an ever-present but unobstrusive narrator, a lawyer caught in an upside-down universe where the government, courts and police stand for injustice. His tone has the acidic clarity of a David Hare monologue.’ – Observer

‘Peter Harris’s book is going to knock your socks off. It reads like a John Grisham novel, but it’s all true.’ – Jenny Crwys-Williams

‘The most wonderfully good book about South Africa I have read in a decade.’ – Business Day