Ghanaian novelist and poet Kojo Laing passed away on Thursday, 20 April 2017 in Ghana, according to reports.

Laing was born in Kumasi, Ghana, in 1946. He studied at the College of Management, Ghana, and Birmingham University in the UK before earning a Master’s Degree in political science and history from Glasgow University in Scotland. 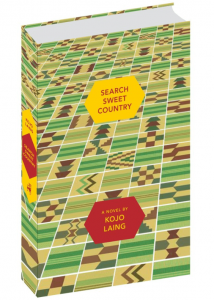 Laing began his career as a surrealist poet in the 1970s, but earned acclaim with the publication of his first novel, Search Sweet Country, in 1986, which won the Valco Award and the Ghana Book Award.

Search Sweet Country was reissued by McSweeney’s in 2012, with an introduction by Binyavanga Wainaina, in which he called it: “The finest novel written in English ever to come out of the African continent.”

Laing’s second novel, Woman of the Aeroplanes, was published in 1988, followed by a poetry collection, Godhorse (1989), and the novels Major Gentl and Achimota Wars (1992), which also won a Valco Award in 1993, and Big Bishop Roko and the Altar Gangsters (2006).

Laing’s work covered futurism, speculative fiction and magical realism, and he was known for his linguistic originality, using Ghanaian Pidgin English and vernacular languages in his work as well as standard English.

Kojo Laing was an extraordinary talent. There was nobody quite like him in Africa, actually in the world. I was in love with Search Sweet Country, his masterwork. That novel was by far the best novel ever written by an African. I will be going to Ghana for the funeral. Everything he wrote was exceptional. Many things he wrote were too wild for general consumption. He was a genius. I am going to liaise with his family to publish all his unpublished works.

I am very sad today. A giant has died. I hope the Ghanaian political establishment recognises this.

Authors and fans paid tribute to the great man on Twitter:

Kojo Laing is dead. Africas best novelist, by far. He died yesterday morning in Ghana. His masterworks will last forever. I mourn him.

Remembering Ghanaian novelist Kojo Laing today and his advice "Don't listen to anyone!" at the Caine Prize workshop in Ghana 2015 #RIP pic.twitter.com/07crdrmO0z

Remember meeting Kojo Laing, in Elmina @CainePrize workshop 2015. He was lovely, incredibly intelligent and witty about me being late. RIP 😭

"You have to be true to yourself, not necessarily to your reader.In a sense, you have to be authentic to your work." ~ Kojo Laing #Ghana https://t.co/lbzdHrkxZp

Really? Poet and novelist Kojo Laing is gone? What a world we live in. "Search Sweet Country" helped me in many ways #RIPkojo

Wow. This is very sad news. Kojo Laing was a rare, very brilliant novelist. unmatched. We will miss him. https://t.co/GpcxVl0Uvk

I could never find a way into Kojo Laing's later weirder work, but "Search Sweet Country" is blow-the-top-of-your-head-off brilliant. RIP.