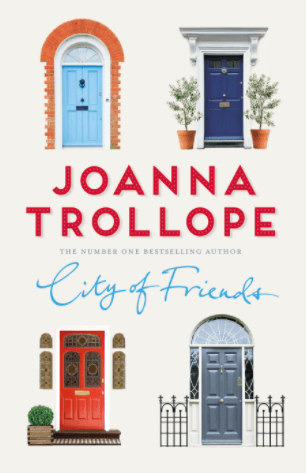 City of Friends is the twentieth novel from the highly acclaimed number one bestselling author, Joanna Trollope.

She glanced at her phone again. There were appeals from the girls, from her colleagues, a text from Steve reading with uncharacteristic imperiousness, ‘Call me.’ She couldn’t. She couldn’t call anyone … she leaned forward, gripping the edge of the bench, and stared at the ground. God, she thought, am I losing my mind? Is this what happens when you lose your job?

The day Stacey Grant loses her job feels like the last day of her life. Or at least, the only life she’d ever known. For who was she if not a City high-flyer, Senior Partner at one of the top private equity firms in London?

As Stacey starts to reconcile her old life with the new – one without professional achievements or meetings, but instead, long days at home with her dog and ailing mother, waiting for her successful husband to come home – she at least has The Girls to fall back on. Beth, Melissa and Gaby. The girls, now women, had been best friends from the early days of university right through their working lives, and for all the happiness and heartbreaks in between.

But these career women all have personal problems of their own, and when Stacey’s redundancy forces a betrayal to emerge that was supposed to remain secret, their long cherished friendships will be pushed to their limits …

The day Stacey Grant lost her job was a Wednesday. Somehow, having Thursday and Friday still to go, in a working week, only added to the shock of what had happened, the violent sense of injustice.

How could this be? How could it? She was, after all, a forty-seven-year-old woman who had been – usefully, commendably – at the same company for sixteen years. Sixteen years! Jeff Dodds, the senior manager who had sacked her, was two years her junior and had joined the company five years after her. He was not, Stacey had repeatedly insisted to her colleagues, a bad person. Despite his habit of sending demanding weekend emails and ringing late at night with urgent requests for feedback, he was only really testing their commitment to the company. He was, she pointed out, almost avuncular in his desire to mentor his teams, to offer advice and guidance. That he didn’t understand the realities of their lives was indeed a blind spot, but not a deliberate cruelty. There were worse managers by far, Stacey had told the rest of the team repeatedly, than Jeff Dodds.

So much, she thought now and savagely, for my loyalty. So much for my sense of stupid fair play. So much for doing the decent sodding thing. The eyes of her colleagues were upon her as she packed the contents of her desk into a cardboard box. A few were mildly gleeful – this was a diversion after all – but most looked stricken and sympathetic. Several had tried to speak to her when she came out of the meeting room with Jeff – ‘How,’ her husband Steve had said, when the move to an open-plan office had first been mooted, ‘do you fire someone in front of everyone else?’ – but she had made it plain that if she opened her mouth at all, it would be to scream. Which, after the brief, excited moment of release, would leave her feeling worse than ever. She had shaken her head, and tried to smile, and headed back to her desk as if an imperious purpose awaited her there. So they watched her, covertly, while she collected up the pitiful domesticity of her working life, and dropped it in a box.

By the lifts, a colleague came running to intercept her. He was openly agitated. The top button of his shirt collar was undone, under the loosened knot of his tie.

‘Too late,’ she said, indicating an arriving lift.

She stared down at the box in her arms. ‘It wasn’t you.’

She didn’t look up. She found she couldn’t. ‘He had other ideas. Other ideas entirely, Tim. All I did, in the end, was give him the chance to implement them.’

‘I don’t understand. He can’t just sack you for asking to work flexibly, he can’t – it’s against the law.’

Stacey sighed. The box in her arms had suddenly become unbearably heavy.

‘He’s not a monster, Tim,’ she said, sadly. ‘He’s just a dinosaur. He’s got a wife to run his domestic life and his own parents are conveniently dead. He just doesn’t have a clue.’

Another lift pinged its arrival.

‘I can’t stay. Not another minute. Not after this.’

‘Please let us take it to another level. Please don’t be so impulsive, whatever he said. Please.’

Stacey stepped into the lift. Her handbag was slipping awkwardly off her shoulder. She turned to face the open door. ‘Just be warned,’ she said.

And then the lift doors slid shut across his unhappy face, and she was borne down to the glass and chrome foyer, where Charlie from Ghana was on reception, absorbed in the football results on his smartphone.

At the top of Ludgate Hill, in the new precinct to the left of St Paul’s Cathedral, Stacey found an empty litterbin. Extracting the few framed photographs from the box, she tipped the rest of the contents into the bin: new packets of tights, sundry redundant cables, energy bars in battered packets, a toothbrush, paperclips, pens, old birthday and Christmas cards, a rubber spider someone had left on her computer screen on April Fools’ Day and a small cascade of other objects which represented, that Wednesday afternoon, happier and more certain times. After the box was emptied, she crammed it down on top of everything it had contained, breaking it in order to fit it into the bin. When she was fourteen, she remembered, and her mother’s brother had left the Royal Air Force, she had stood in the yard behind her modest childhood home and watched him burn his uniform in a galvanized metal dustbin.

‘We don’t do nostalgia,’ her mother had said to Steve when he was Stacey’s fiancé. ‘Not as a family. We don’t do regrets. We don’t look back.’ She’d smiled at him. ‘We can’t afford to.’

Stacey put the photographs – Steve, the dog, Steve and the dog, her mother and the dog – in her bag, and walked across to a coffee shop. She bought a regular cappuccino without chocolate on top, and took it to a seat in St Paul’s Churchyard. There was another woman at the far end of the bench, speaking into her phone in rapid Arabic. Stacey set her coffee down and took her own phone out of her pocket. She had deliberately switched it to mute, in order to avoid having to deal with the aftermath of the afternoon’s drama. Sure enough, there were five missed calls and a flurry of texts from her now ex-colleagues. She wouldn’t, she decided, even look at Twitter. Instead she sent Steve a brief, laconic text to let him know that the meeting was over – ‘I’m out. Tell you later.’ – and then scrolled to her Favourites section. She stared at the list. Steve, Mum, Beth, Melissa and Gaby. All of them but Mum knew that she was seeing Jeff Dodds today. Mum didn’t know because Mum was the reason the interview was necessary. Mum would be furious, livid was her usual word, that Stacey had asked for the unheard of, had asked for flexible hours, had asked for a specific non-linear period of working, had asked, in short, for a form of employment that contravened the accepted model of the white male competitive system.

He had been smiling at her, and his smile didn’t waver. ‘I can’t agree, Stacey. I see what you’d like to be the case, but I’m afraid you’re whistling in the wind.’

‘I have an excellent track record.’

‘I’ve brought more investments to this team than anyone.’

‘I wouldn’t dispute that,’ Jeff said, ‘for a single minute.’

‘And I’ll go on doing it. I’ll look after all the companies we’ve bought; they won’t even know I’m not at my office desk all the time. Nothing will suffer workwise. I just need to stagger my hours, work from home more, now that my mother will be there. I bought five businesses with the team, last year, as you know. None of those businesses will suffer; I’ll visit every one every time something needs assessing or sorting. All I’m asking is that I don’t need to be tied to this desk, in this office, all the time. I can go through all the portfolios every six months, just as I always have, but from home.’

Jeff Dodds went on looking at her, went on smiling. Then he leaned forward, put his elbows on the desk, and spoke with quiet unmistakable emphasis. ‘No. Sorry, Stacey, but no.’

She took a breath, to steady herself. ‘Why not?’

She felt a heady rush of fury. ‘So you are prepared to derail someone who is truly valuable to the company for some young guy primarily motivated by money?’

Jeff leaned back again and put the tips of his fingers together. ‘I wouldn’t put it like that—’

‘Stacey, I really don’t want this to get personal and un–pleasant . . .’

‘It is already,’ she said. ‘You can ask a man like you to work a sixty-hour week for years on end because most of them don’t have the bottom line of family responsibilities. They don’t have to think about gender, or race, much either. It’s easier for you, Jeff, isn’t it, to replace me with a man who mightn’t be half as good as I am, than to even try and get your mind round what I’m asking?’

He had let a beat fall, and then he said, ‘I’m not talking about replacement.’

Stacey could hear how unprofessionally urgent her voice had become. She said, trying to rein herself in, trying not to sound triumphant, ‘But you can’t refuse me, Jeff. Not any longer. You can’t refuse my request to work flexibly. It isn’t legal any more to refuse a request for flexible working.’

He moved towards her, very slightly, as if bending stiffly from the waist in an absurd kind of seated bow. ‘I’m afraid, Stacey, that we are overmanned at your level. Seriously so. There is no easy way to say this, but I have to lose you. I have, you see – and your coming to me like this is completely random, of course it is – to make you redundant.’

She had felt very little then. It was as if she had been mildly concussed, and was feeling her way back to some kind of reality. She had even allowed him to say several platitudinous things about her contribution to the company, about her ability to be part of a team, even how much they would miss her. And then he said that long drawn-out departures were very destructive both for the departing employee and for team morale, and she found herself agreeing – agreeing! – in a blaze of fury and despair, almost knocking over her chair as she got to her feet and waving away his suggestion that he should call her a taxi.