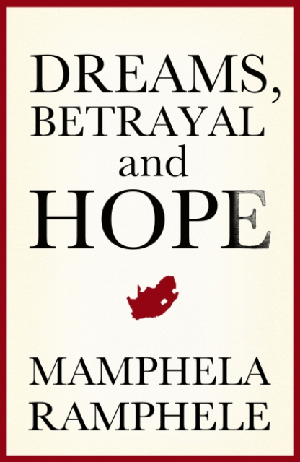 The impact of Black Consciousness on the struggle for liberation needs to be harnessed to help us find our voice again. – Mamphela Ramphele

Systematically since 1994 the ANC government has betrayed the dream of democracy. A dream that imagined equality, the end of poverty, a thriving economy, and a just and prosperous future for all. Most devastatingly this betrayal can be seen in the failure of educational institutions to develop the talents and skills of the young generations. Given the ‘Fallist’ protests, given the public service delivery protests, given the voters’ message to the ANC in the municipal elections, ordinary people are suffering. Poverty still wears a black face. White racism becomes ever more strident.

The country needs to hope again.

In this searing critique of what’s gone wrong in the public and private sectors, Mamphela Ramphele turns to the tenets of black consciousness and argues for an ‘emotional settlement’ to heal the trauma of colonialism and apartheid that still ravages both black and white communities. Emotional settlement would unlock empathy for others and unleash the potential of all citizens to work together for a ‘socio-economic settlement’ to promote social justice and equality for all. ‘It is time,’ she says, ‘to reimagine the country and its future. We owe this to our children’s children. We dare not fail.’

The impact of struggle politics

The healing process to effect an emotional settlement requires deep introspection by black citizens to acknowledge how their woundedness undermines their ability to assume the responsibilities and rights of citizenship. We have allowed ourselves to accept a narrative of the struggle that reduces us to the status of passive recipients of freedom with the ANC as our liberator. We have, over the last twenty-three years, acquiesced in the erasure of our agency as active participants in the struggle for freedom.

We have become tolerant of the use of this narrative as an excuse for the entitlement to rule by the ANC. Acknowledging and celebrating the very significant role the ANC played in our struggle
for freedom does not have to come at the expense of distorting history. We need to heed the demands of students for a more robust approach to African and South African history in our schools and universities.

The impact of Black Consciousness on the struggle for liberation needs to be harnessed to help us find our voice again. We need to draw strength from our success in ditching the ‘non-white’ label to rename ourselves black and proud. Recalling memories of the surging self-empowerment that enabled us to mobilise ourselves to resist a racist system would bolster us as we assert our rights and discharge our responsibilities against an unaccountable government today. We dare not continue to betray the sacrifices of the generation that led the 1976 uprisings by not listening to the voices of today’s generation of young people.

Exile was also a very wounding experience. Those who lived in exile during that brutal period of the struggle for freedom also need to acknowledge the wounds they suffered at the hands of the enemy, as well as the abuse they endured from fellow comrades. The need for healing should cover all these areas. The loss of the anchors of family and familiar neighbourhoods and the sacrifice of one’s youth to the struggle has left many wounded. For them, re-rooting in the post-apartheid society has not been easy. There are countless people who disappeared leaving families with gaping holes in their hearts. For these families there has been no resolution.

In his memoir on life in exile, Hugh Macmillan chronicles with great sensitivity the loneliness, pain, alienation, sense of loss, and waste of energy and time that were essential features of life for most exiles for much of the time. Mazisi Kunene captured this poignantly in a poem that Macmillan quotes:

How terrible the fate of a man in exile!
I am a wanderer roaming in foreign
Lands.
I have earned the name of Dingiswayo, ‘The exiled one’.

Life in exile stole my youth.
Often I have to salute a low breed of Upstarts.

Many of the returnees and veterans of the struggle continue to endure lives of despair and destitution. They experience abandonment on the margins of society by their own comrades who have betrayed them in favour of power and privilege. All those who continue to live in internal exile need to be considered and heard. They should be able to mourn their losses, be embraced by others in their grief and assisted to find a way forward to lead dignified lives.

We also need to heal from a new form of control that has captured the minds of poor people: namely, the active cultivation of a dependence on government to solve all our problems. As citizens, black and white, we have been complicit in this new form of control and enslavement by not raising the alarm loudly enough and consistently. Many of us have turned a blind eye so that we can enjoy the patronage that flows from corrupt deals in a corrupt state.

Black people also need to confront the deeper psychosocial reasons for their continuing tolerance of the ANC’s abuse of power. To reiterate: black people, having endured the humiliation of deep-seated stereotypical attitudes and practices, are afraid of being seen to be criticising fellow black people in leadership positions, lest this fuels attacks by racists. Solidarity takes the form of silence in the face of wrongdoing by people who should be held accountable. Many believe that speaking out as a black person against corruption and incompetence would be seen as conceding to racist stereotypes of black people’s inability to lead.

The lessons of history about this ‘silence’ abound on our continent and elsewhere. ‘A society haunted by fears of the past and fears of the present is easy prey for opportunistic political leaders,’ says Dan Bar-On. In many instances, post-colonial and former liberation movement leaders have kept themselves in power by engendering fear among citizens. Fear of former colonials returning as neo-colonials is reason for a life presidency to stand guard over a hard-won freedom. Fear of racists in whatever guise – ‘clever blacks’ or agents of imperialists – reversing the gains of freedom in post-apartheid South Africa is reason enough for continuing to vote for an unaccountable former liberation party. If all else fails, then fear of being disappeared or your reputation being ruined by false accusations is often enough to silence the dissenting citizen’s voice.

Then there is the fear of fulfilling an ever-present stereotypical threat that as a black person you might fail and prove the racists right. Add to this, as I have said, the fear of betraying solidarity by exposing corrupt leaders who happen to be black, and you have the black citizen’s dilemma. The threat of conforming to a racist stereotype is a fear in many black people. They dare not do anything or say anything that will confirm to racists that they are incompetent, ignorant, dishonest and irresponsible. This type of threat undermines relationships of trust essential for accountability in democratic politics.

We also need to systematically examine and heal the institutional cultures of our educational institutions – pre-schools, schools, universities and colleges – to root out any remnants of racism, sexism and other discriminatory abuse. The outbursts of racist and sexist remarks or actions in our education system need to be addressed as and when they occur if we are to eliminate the underlying prejudices embedded in our diverse cultures. We should not behave like victims, but as shapers of a new future.

We have failed to set the tone of what a non-racial African society should be like – a society in which all matters African are the mainstream in teaching and learning and in cultural endeavours, be they philosophy, language or artistic expressions. Once more I ask: how can we still have schools that punish learners for speaking their mother tongue twenty-three years into our democracy? African culture’s relegation to a minority culture is enabled by our lack of understanding of its strengths and relevance in a society built on human rights. Self-proclaimed liberals or Westerners, as some of them prefer to identify themselves, tend to interpret Ubuntu as only espousing collectivism. They completely miss the celebration of the unique attributes individuals bring to the collective to enrich and strengthen the common good.

Individuality is not only celebrated in African culture, but it is nurtured and reinforced. Praise songs in all African languages identify and amplify the unique attributes of the person being honoured. The clan and the family are the nest within which the individual is situated. A complementarity is at work to recognise the individuality of a person in the strengths of their relationships within the family and wider society.

So-called Western philosophy that crowns the individual as sovereign and autonomous not only disregards the central tenant of Ubuntu – ‘I am because you are’ – but also diminishes any accountability of the individual to the wider public. In other words, it does not take into account the benefits and privileges that an individual may enjoy that resulted from the violation of the rights of others. In South Africa, the people who are proponents of this form of liberalism are beneficiaries of one of the most successful affirmative action programmes in favour of white people ever implemented in history. The political settlement process to which we agreed entrenched these benefits. An emotional settlement would give us an opportunity to explore these viewpoints so that we can shape a democratic culture aligned to our human rights and the values of Ubuntu.

Building a genuinely non-racial society where the equality of citizens is not just espoused but enacted in everyday life requires acknowledgement of the accrued benefits and privileges of our divided past. Such acknowledgement would enable us to reach an agreement on how to work together to create a country in which all would have access to the resources that have been the exclusive preserve of some. Healing the wounds of the humiliation of poverty in the midst of plenty would unleash the diversity of talents in our society and enlarge the pool of those actively contributing to our greater prosperity.