‘You’re in big, big trouble …’ Read an excerpt from Taking Selfies with A Sheep by Jaco Jacobs
More about the book! 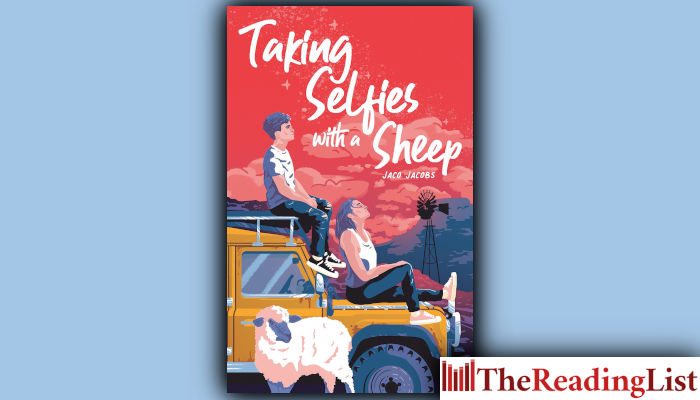 Penguin Random House has shared an excerpt from Taking Selfies with A Sheep by Jaco Jacobs.

A troublemaker about to get kicked out of school.

An eccentric grandmother with a canary yellow Land Rover and a camera.

A girl who loves books.

A sheep that turns into an internet sensation overnight.

‘You’ve got to be kidding me!’

The moment the words were out of my mouth, I regretted them. Not because I knew they would raise my dad’s blood pressure even further – I was sort of used to making his blood pressure soar. But there was one thing you couldn’t accuse my dad of – a good sense of humour. He’s a barrister. He’s always serious. Okay, maybe that’s a bit unfair. I’m sure there are barristers who are jolly and joke around all day. My dad just isn’t one of them.

‘Luke, let’s be clear about this,’ he said in that voice that could reduce witnesses to tears in court. ‘You’re in big, big trouble. I’ve decided that you’d better spend the holidays somewhere else. I’ll sort things out while you’re away.’

If my dad were a superhero, that would be his superpower. The Incredible Mr Sort-Things-Out.

If my mom were a superhero, her superpower would be sighing and giving criminals the kind of reproachful look that made them feel guilty for life. Dad’s trusted sidekick, Guilt-Trip Girl.

‘Your grandmother promised she’d be here early tomorrow morning to pick you up,’ he said and reached for the TV remote. Captain Cut-It-Out.

I gritted my teeth.

I had already made plans for the July holidays that had just started.

Hang out with my mates.

Go on a trip to the dry, dusty Karoo with my granny.

Heaven knows how they came up with that idea. It wasn’t as if spending holidays with my grandmother was a regular thing. In fact, her name wasn’t often mentioned in our house. And the Karoo, with its endless kilometres of semi-desert nothingness, was one of the last places on earth I was planning to spend a holiday.

I went outside and sat on the garden bench. If it weren’t for the bare trees you could easily forget that it was winter. The sun was beating down on the clear blue water in the pool, the Kreepy Krauly rhythmically tzick-tzick-tzicking. Even in the middle of winter my dad kept our pool a bright blue; he was fanatic about testing the pH level once a week and checking that there were no signs of algae or any other pool bugs.

After a while, Linda appeared from the house. She had showered; her hair was wrapped in a towel and I could smell shampoo when she sat down next to me.

‘Dad’s quite miffed,’ she said in a sympathetic voice.

She would have to watch out. If she went on like that, she would soon be sighing as much as our mom.

Linda was at university – she’s almost seven years older than me. My sister was the apple that didn’t fall far from the tree. At school she had been head girl and had scored straight As, she was studying law and her boyfriend played rugby for the university’s first team. So, anything I say about her will sound as if I was jealous or felt sorry for myself.

‘Maybe the holiday with Gran won’t be as bad as you think,’ she said, trying to cheer me up while removing the towel and patting her long blonde hair dry in die sun.

She looked up and merely smiled at my lame joke.

The thing is, the trip with my grandmother wasn’t supposed to be a holiday. It was my dad’s way of punishing me for what had happened. My dad thought it would be better for me not to have any contact with Ryan and Zane. So my phone was locked away and I was banned from calling them – and my dad was going to make sure that I couldn’t get anywhere near them during the holidays. Even if it meant sending me away to the middle of nowhere with my grandmother, although he personally couldn’t bear the sight of her.

Linda draped her wet towel over the back of the garden bench and combed her hair with her fingers. She fixed me with a serious look.

‘Tell me one thing, Luke … What on earth got into you and those two friends of yours to do something like that?’

She had been studying law for less than a year, but she was already starting to sound just like my dad. Scary!

Staring at the pool, I thought back to the previous Friday evening. Our hushed voices in the dark. Adrenalin pumping through my veins, my stomach knotting with excitement. The sharp sound of breaking glass shattering the silence of the night. The thudding of our sneakers on the tarmac …

I looked at my sister and simply shrugged.

I wasn’t a law student but I had watched enough American cop shows to know: You have the right to remain silent. Anything you say can and will be held against you.

That was exactly what I was planning to do.