‘When he spoke, he sounded as if his throat was full of buzzing bees’ – Read an excerpt from Robert Muponde’s memoir The Scandalous Times of a Book Louse
More about the book! 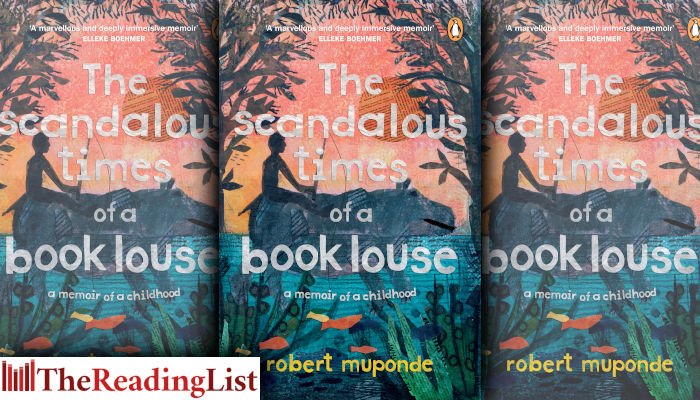 Penguin Random House has shared an excerpt from The Scandalous Times of a Book Louse by Robert Muponde – a magical coming-of-age tale in rural Zimbabwe.

Ah, you’ve arrived. Sit down, please, and make yourself comfortable. There may not be much dinner tonight – Father is still out of work; Mother can’t do anything with those stunted maize plants in the stony ground – but at least you are here, in Gushure Village, home to unsurpassed raconteurs and the Guramatunhu family, who know that telling stories staves off hunger.

Surprise awaits at every turn: thoughts and conversations bloom into poems, political speeches and songs. You will find instructions for cooking a hare, for how to defend yourself when a dead snake is your enemy’s chosen weapon, how to speak in war tongues, how to compose a fist and aim it at a tree trunk, how to eliminate animal terrorism in a time of rabies, how to rehearse the body-viewing of a good-looking corpse, how to rock under flying okapis with The Double Shuffle, and how to practise your lovemaking technique on a woman drawn in the sand.

At a time when cooked ants constitute a feast, the future nevertheless holds abundant prospects for the boy who devours words. But there is an unexpected fork in the road for this book louse, and plenty of wondrous twists and shocking turns.

Hilarious, poetic and poignant, Robert Muponde’s vibrant coming-of-age story of Ronald Guramatunhu brings to life rural Zimbabwe from the Second Chimurenga to independence. There are malevolent mermaids, eccentric shamans, outrageous relatives, fearsome teachers, and men who transform into hippos in a tale that captures all the magic of childhood.

Robert Muponde holds a PhD in English from Wits University, where he is both a professor of English in the School of Literature, Language and Media, and the Wits Director of Postgraduate Affairs. He grew up in Rusape, Zimbabwe, and has lived and worked in Johannesburg for the past 20 years.

Sometimes, Mr RG Muwengwa lured us into working for him whilst he told his stories. He was a genius when it came to telling ones that were all too familiar but became new and strange with each retelling. It is what made me the hungry goat in the proverb. The more you hit it to get it away from your crops, the more it persists in coming back for them.

If the story was about Herudhe, Mr RG Muwengwa made us see a man as short and enigmatic as a tokoloshi, a rucksack dripping with children’s blood on his curved back, his crab-like eyes rotating like owls’ ears trying to pinpoint the noises of playing children.

If it was about Sekuru Madhongi, he recounted the baffling mystery of a donkey dying of a bee sting and aiming futile kicks at the buzzing insects.

If it were Zikomo, he made you see the smouldering pieces of turd that landed on the ears of those who crossed him. He was dramatic when telling the story of Daniel and Makazhu, the two hippos. Once he drank water from a gourd and ballooned his cheeks, then aimed a fine spray at our faces and yawned an enormous HAAAA! It was like showering in the thundering mists of the Mosi-oa-Tunya, he said, when he saw our bodies wet from the spray.

If the story was about my grandfather, he conjured a pipe-smoking, helmeted, mouldy devil in a trench coat and rawhide jombo boots.

If it was about my father, he clicked his tongue – tsk-tsk-tsk – and spat at my toes, aimed an axe at the roof of his hut and left it in the thatch for days, until one of his sons was told to fetch a ladder and pull it out. His wife would come over to me and whisper urgently: ‘Don’t make him talk about your father, iwe!’

If it was at the end of the story of Old Noah and The Flood, he looked closely at Chomi’s crooked neck, cleared his throat, and asked: ‘Did you laugh at your father’s labour, great-grandson of Dhukurudhu?’ He would then stare intently at his other children, as if he wanted to decide which one to curse or bless. They would quickly scamper out of his sight.

Mr RG Muwengwa particularly liked the story and song about Jonah, the man who once sojourned in the belly of a gigantic fish. He liked it so much that he named his first-born son Jonah, who later joined the raging 1970s bush war.

Jonah Muwengwa, dark like an over-ripe mulberry, quiet like a deep cave, long-shanked like a stork and rangy like an overfed weed; the war swallowed him up completely and he was never seen again.

The ninth n’anga they consulted two years after the end of the bush war was Mbuya Chitopota, a woman from faraway Dande. She was wiry, one-legged, one-breasted and bent like a barbed-wire fence staple. She arrived at night carrying a sooty reed basket with a lid. The ritual of finding and bringing home Jonah had to be performed at the edges of a deep well, she said. She let out a piercing screech and hopped across the wide mouth of Mr RG Muwengwa’s deep well as if she was playing hopscotch and then circled it as if she was playing a game of rounders. In the morning, men with solemn faces dragged her out of the dark hole into which she had fallen. She died on her way back to Dande.

Shocked, Mrs Muwengwa immediately joined an apostolic sect, exchanged her clothes for all-white shapeless robes and went about singing ‘Makanaka Jehovah, makanaka!’ Oh, you are good Jehovah, you are good! Mr RG Muwengwa fled his home and found sanctuary in the arms of a Mundewere widow who had settled in the part of Chizhanje that faced away from Gushure Village. She bore him a midget of a son. He named him Jonas, returned to his wife, and to his old ways.

Mufambi Mufemberi, the thirtieth prophet they consulted nine years after the end of the war, was from the Mwari waAburama naIsaka clan. Both his forefingers were missing and each foot had only two toes. His mouth always hung open, like a snake holding a rat – my father said this was the unavoidable consequence of his indiscriminate issuing of dreadful prophecies to all sides involved in the bush war – when he spoke, he sounded as if his throat was full of buzzing bees. He led them to an open mass grave and shook his malformed fist with surges of prophetic power. His eyes pored over the grotesque bundles of decaying bones. Upon seeing an unusual skeleton, Mufambi Mufemberi suddenly screamed: ‘Muka Jonah! Muka Jonah!’ Wake up, Jonah! The longest set of bones which lay in an awkward tangle at the bottom of the ditch was that of Jonah, said Mufambi Mufemberi. As having been a very tall boy, it follows that he must have grown much taller during the years his parents had searched for him. ‘Amen!’ cried the prophet.

The search party carried the bones home in a grain vhorosaki bag and Mufambi Mufemberi laid them to rest in the place where Mr RG Muwengwa had secretly buried the remains of Makandishora’s penis.