UCT Under Apartheid: From Onset to Sit-in, 1948–1968 by Howard Phillips – a pioneering and definitive history of the period 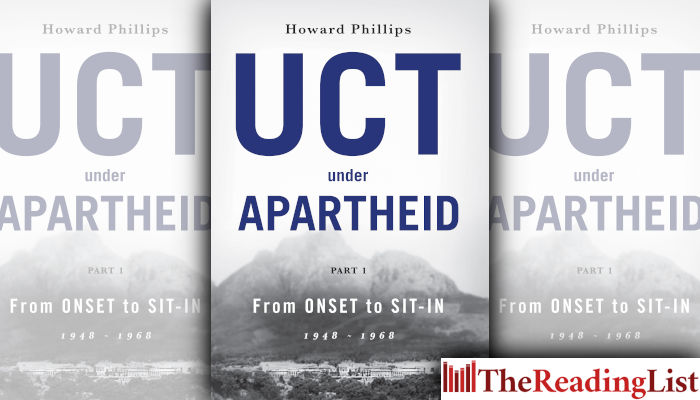 UCT Under Apartheid: From Onset to Sit-in, 1948–1968 by Howard Phillips is out now from Jacana Media.

Drawing on an extensive array of sources – written, oral and visual – this richly illustrated volume provides a rounded social, intellectual, educational, cultural and political history of one of Africa’s foremost universities during the first phase of apartheid.

The book puts a spotlight on its leaders, lecturers and learners, but its wide focus takes in many other dimensions of this heterogeneous institution’s history too – teaching and research, social, cultural and sporting life and its chequered relationship with the apartheid state, ranging from formal opposition and protest and students’ growing defiance culminating in the sit-in of 1968, to ambivalence and willing collaboration.

All of these it weaves together into a many-sided whole to produce an elegant, accessible and nuanced study of the operation of UCT as apartheid began to be imposed on South Africa.

Howard Phillips gives us a pioneering and definitive history of the period. And one which will occupy pride of place on the bookshelves of the academics and the thousands of alumni who helped shape this history and the many ordinary Capetonians touched by Varsity.

As a sample of the overview the author provides of the period, he sums up the transformation of UCT’s relationship with the state in these years as follows:

In 1948 this had largely revolved around finance; by 1968, to this pivotal issue had been added the question of the racial identity of its students and teachers, issues which pitted it increasingly against the Government.

If in the 1950s it was the University authorities who initiated this opposition in a very proper, formal manner, in the 1960s it was students who, taking full advantage of their university’s location within reach of Parliament, set the pace in far more confrontational ways, even to the extent of challenging UCT itself. In the next two decades such protests were to gather pace on campus, giving rise to the tag for UCT as ‘Moscow on the Hill’ from critics. This was a very far cry from its image in 1953 as ‘a credit to the city… a symbol of an ideal youth which works and plays in a spirit which is infectious’, as Varsity portrayed it.

Emeritus Professor Howard Phillips is a graduate of UCT and London University and taught in the Department of Historical Studies and the Department of Public Health at UCT from 1974 to 2014. He specialises in the history of disease, medicine and health and in the history of higher education and has written several books in these fields, among which are At the Heart of Healing: Groote Schuur Hospital 1938–2008, In a Time of Plague: Memories of the Spanish Flu Epidemic of 1918 in South Africa and UCT 1918–1948: The Formative Years.

1. UCT and the World in 1948
2. Running UCT
3. Building a Second UCT
4. Teaching, Learning and Researching: UCT’s Academic Project
5. Pure Science: The Faculty of Science
6. The Applied Sciences: Engineering and Medicine
7.The Professional Faculties: Commerce, Law, Education, Architecture and Social Science
8. The Arts: Musical, Liberal and Fine
9. Reaching Out: UCT and the Wider Community
10. Colliding and Colluding: UCT and the Apartheid State
11. Learning in (and out of) Class: Student Life
12. UCT and the World in 1968