These Are Not Gentle People: Two murders. 40 suspects. The trial that broke a small South African town
More about the book! 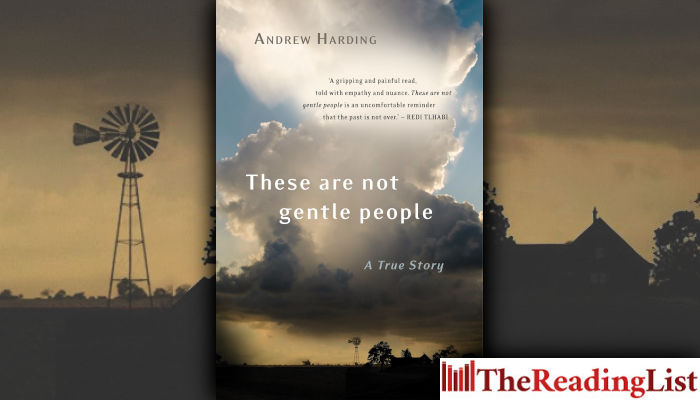 ‘Look what the fucking dogs did to them, someone muttered. No one mentioned the rope, or the monkey-wrench, or the gun, or the knife, or the stick, or the whip, or the blood-stained boots. In fact, no one said much at all. It seemed simpler that way. There was no sense in pointing fingers.’

From the author of The Mayor of Mogadishu, a mesmerising examination of a small town trying to cope with a trauma that threatens to tear it in two.

These Are Not Gentle People is as much a journey into the heart of modern South Africa as it is a gripping tale of crime, punishment and redemption.

The book will be out from Pan Macmillan in September.

‘These Are Not Gentle People is a South African tragedy. Page after page reveals the painful truth, that the sun has set on Mandela’s Rainbow Nation. Dreams and hopes of a better future have been silenced by fear, racial tension and a disengaged political system. The lives of the characters, from the landless and poor blacks, to the white landowners caught in a vortex of fear and oblivion, are a true reflection of South Africa’s unfinished business – building a country that belongs to all. For the people of Parys, that dream is elusive and the contestation for a place under the sun, is fierce, brutal and deadly. A gripping and painful read, told with empathy and nuance. These are not gentle people, is an uncomfortable reminder that the past is not over.’ – Redi Tlhabi

‘Every so often a book comes very close to defining a nation. In this extraordinary, fast-paced and exquisitely written true story, South Africa’s brutal and divided past, its complex present and contested future collide in an explosive narrative of murder, race, class and human cruelty. This is In Cold Blood meets Midnight in the Garden of Good and Evil. Believe me, Andrew Harding has given us an instant classic.’ – Justice Malala

At dusk, on a warm evening in 2016, a group of 40 men gathered in the corner of a dusty field on a farm outside Parys in the Free State. Some were in a fury. Others treated the whole thing as a joke – a game. The events of the next two hours would come to haunt them all. They would rip families apart, prompt suicide attempts, breakdowns, divorce, bankruptcy, threats of violent revenge and acts of unforgivable treachery.

These Are Not Gentle People is the story of that night, and of what happened next. It’s a murder story, a courtroom drama, a profound exploration of collective guilt and individual justice, and a fast-paced literary thriller.

Click on the link above for more about the book

Andrew Harding is the author of the internationally acclaimed The Mayor of Mogadishu and a foreign correspondent for BBC News. He left Britain in 1991 and has since lived and worked in the former Soviet Union, Asia, Kenya, and – for the past decade – in South Africa. His radio and television reports have won him international recognition, including an Emmy, and awards from Britain, Hong Kong, France and Monaco. He currently lives in Johannesburg with his family.