‘There are eight million naked cities in this naked city’: Read an excerpt from Colson Whitehead’s The Colossus of New York
More about the book! 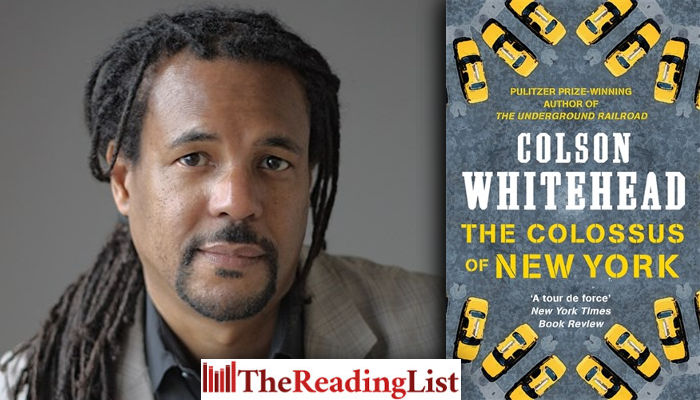 Read an excerpt from The Colossus of New York by Colson Whitehead, out now from Jonathan Ball Publishers.

Whitehead won the Pulitzer Prize, the Arthur C Clarke Award, an Andrew Carnegie Medal and the National Book Award for The Underground Railroad.

The Colossus of New York is a remarkable portrait of life in the big city. Ambitious in scope, gemlike in its details, it is at once an unparalleled tribute to New York and the ideal introduction to one of the most exciting writers working today.

I’m here because I was born here and thus ruined for anywhere else, but I don’t know about you. Maybe you’re from here, too, and sooner or later it will come out that we used to live a block away from each other and didn’t even know it. Or maybe you moved here a couple years ago for a job. Maybe you came here for school. Maybe you saw the brochure. The city has spent a considerable amount of time and money putting the brochure together, what with all the movies, TV shows and songs–the whole If You Can Make It There business. The city also puts a lot of effort into making your hometown look really drab and tiny, just in case you were wondering why it’s such a drag to go back sometimes.

You start building your private New York the first time you lay eyes on it. Maybe you were in a cab leaving the airport when the skyline first roused itself into view. All your worldly possessions were in the trunk, and in your hand you held an address on a piece of paper. Look: there’s the Empire State Building, over there are the Twin Towers. Somewhere in that fantastic, glorious mess was the address on the piece of paper, your first home here. Maybe your parents dragged you here for a vacation when you were a kid and towed you up and down the gigantic avenues to shop for Christmas gifts. The only skyscrapers visible from your stroller were the legs of adults, but you got to know the ground pretty well and started to wonder why some sidewalks sparkle at certain angles, and others don’t. Maybe you came to visit your old buddy, the one who moved here last summer, and there was some mix-up as to where you were supposed to meet. You stepped out of Penn Station into the dizzying hustle of Eighth Avenue and fainted. Freeze it there: that instant is the first brick in your city.

I started building my New York on the uptown No. 1 train. My first city memory is of looking out a subway window as the train erupted from the tunnel on the way to 125th Street and palsied up onto the elevated tracks. It’s the early 70’s, so everything is filthy. Which means everything is still filthy, because that is my city and I’m sticking to it. I still call it the Pan Am Building, not out of affectation, but because that’s what it is. For that new transplant from Des Moines, who is starting her first week of work at a Park Avenue South insurance firm, that titan squatting over Grand Central is the Met Life Building, and for her it always will be. She is wrong, of course–when I look up there, I clearly see the gigantic letters spelling out Pan Am, don’t I? And of course I am wrong, in the eyes of the old-timers who maintain the myth that there was a time before Pan Am.

History books and public television documentaries are always trying to tell you all sorts of “facts” about New York. That Canal Street used to be a canal. That Bryant Park used to be a reservoir. It’s all hokum. I’ve been to Canal Street, and the only time I ever saw a river flow through it was during the last water-main explosion. Never listen to what people tell you about old New York, because if you didn’t witness it, it is not a part of your New York and might as well be Jersey. Except for that bit about the Dutch buying Manhattan for 24 bucks–there are and always will be braggarts who “got in at the right time.”

There are eight million naked cities in this naked city–they dispute and disagree. The New York City you live in is not my New York City; how could it be? This place multiplies when you’re not looking. We move over here, we move over there. Over a lifetime, that adds up to a lot of neighborhoods, the motley construction material of your jerry-built metropolis. Your favorite newsstands, restaurants, movie theaters, subway stations and barbershops are replaced by your next neighborhood’s favorites. It gets to be quite a sum. Before you know it, you have your own personal skyline.

Go back to your old haunts in your old neighborhoods and what do you find: they remain and have disappeared. The greasy spoon, the deli, the dry cleaner you scouted out when you first arrived and tried to make those new streets yours: they are gone. But look past the windows of the travel agency that replaced your pizza parlor. Beyond the desks and computers and promo posters for tropical adventures, you can still see Neapolitan slices cooling, the pizza cutter lying next to half a pie, the map of Sicily on the wall. It is all still there, I assure you. The man who just paid for a trip to Jamaica sees none of that, sees his romantic getaway, his family vacation, what this little shop on this little street has granted him. The disappeared pizza parlor is still here because you are here, and when the beauty parlor replaces the travel agency, the gentleman will still have his vacation. And that lady will have her manicure.

You swallow hard when you discover that the old coffee shop is now a chain pharmacy, that the place where you first kissed so-and-so is now a discount electronics retailer, that where you bought this very jacket is now rubble behind a blue plywood fence and a future office building. Damage has been done to your city. You say, It happened overnight. But of course it didn’t. Your pizza parlor, his shoeshine stand, her hat store: when they were here, we neglected them. For all you know, the place closed down moments after the last time you walked out the door. (Ten months ago? Six years? Fifteen? You can’t remember, can you?) And there have been five stores in that spot before the travel agency. Five different neighborhoods coming and going between then and now, other people’s other cities. Or fifteen, twenty-five, a hundred neighborhoods. Thousands of people pass that storefront every day, each one haunting the streets of his or her own New York, not one of them seeing the same thing.