The Team Secret by Koos Stadler and Anton Burger – To fast-track your business, shape up your teams!
More about the book! 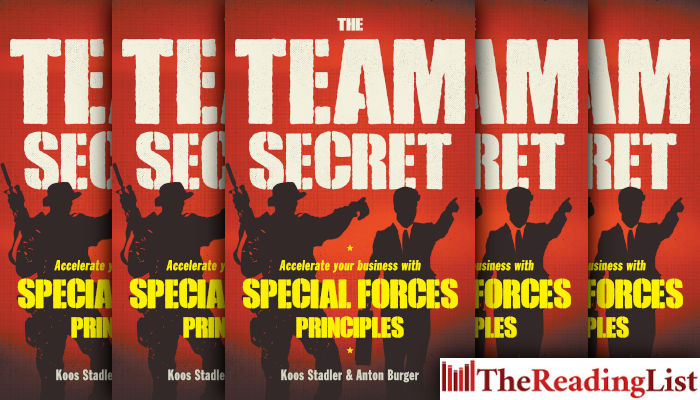 The South African Special Forces achieved exceptional results with small groups of elite soldiers instead of larger, conventional teams. The Team Secret shows that the same principle applies in the business world – a small team has a much better chance of completing projects efficiently, on budget and on time.

Teams, rather than individuals, form the DNA of many companies and they play a pivotal role in achieving strategic and financial success. Like Special Forces teams, they must function as a well-oiled machine firing on all cylinders.

Koos Stadler tells in captivating detail about a real-life Special Forces operation and the lessons learnt about team dynamics and achieving the goal. His story, combined with anecdotes from Anton Burger’s experiences as a team leader in different work environments, show the many lessons the business world can take from the Special Forces.

The book identifies the key characteristics of an effective team, how to select the right team members, how to inculcate an ethos centred around team principles and how an effective team should be led. It speaks to both team members and team leaders across all managerial levels – from a team leader in a call centre to a project manager or CEO.

In short: To fast-track your business, shape up your teams!

Koos Stadler served in the Special Forces for 24 years. He was a member of the Small Teams, a highly specialised group of soldiers who operated in teams of two or three behind enemy lines. In 2006 he founded the Special Forces School and established the unit as an accredited and highly successful training provider. He is the author of the bestseller Recce (25 000 copies sold in Afrikaans and English).

Anton Burger worked for 19 years as a management consultant in financial services, as well as in the manufacturing, mining and government sectors. During this time he worked on and managed projects with budgets ranging from R200 000 up to R200 million and with teams varying in size from two to 110 people.

Friday Night Book Club: Read an excerpt from Reggie and Me, the story of a young South African who hasn’t learnt the rules, by bestselling author James Hendry