The people stood and fought, and fought and stood – Apartheid’s Stalingrad: How the Townships of the Eastern Cape Defied the Apartheid War Machine
More about the book! 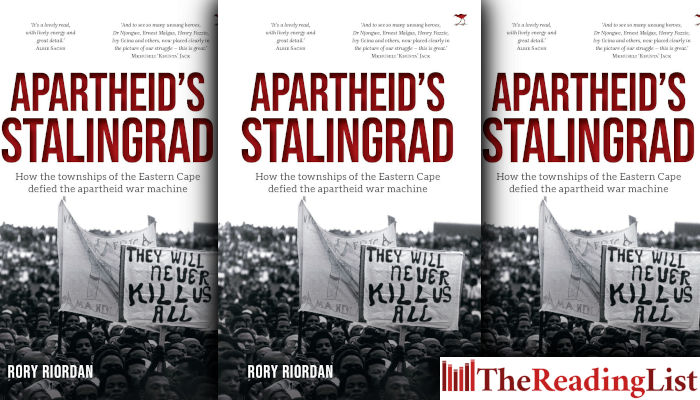 In the townships of the Eastern Cape, where the state threw everything they had at the uprisings of the mid-and late 1980s, the people stood and fought, and fought and stood. Apartheid’s Stalingrad is the first account in remembering those who fought and the power of the people.

Apartheid’s Stalingrad: How the Townships of the Eastern Cape Defied the Apartheid War Machine by Rory Riordan is out now from Jacana Media.

Riordan takes the reader on a long-anticipated and profound journey through the Eastern Cape during the 1980s horror of high apartheid. It was there that the state security juggernaut met its Battle of Stalingrad during the 1985 & 1986 uprisings in the townships of Port Elizabeth and Uitenhage.

This book is the blazing story of how the people’s resistance, through the churches, through the civic structures and in the underground, won that battle.

‘[…] for the first time we have a well-researched and comprehensive account of those difficult, terrible and yet wonderful years of the struggle. I couldn’t recommend it more enthusiastically.’ – Nkosinathi Benson Fihla, Veteran of the struggle against apartheid.

‘Powerfully argued, and a compelling read, this work is a major contribution to our understanding of the end of white minority rule in South Africa.’ – Prof. Peter Vale, Senior Research Fellow, Centre for the Advancement of Scholarship, University of Pretoria, and Nelson Mandela Professor of Politics Emeritus, Rhodes University

Riordan founded the Human Rights Trust in 1986, and its magazine Monitor. He worked extensively in the war-torn townships of Port Elizabeth and Uitenhage in the late 1980s. A former columnist for the Eastern Province Herald, Riordan lives with his wife in Schoenmakerskop, Gqeberha.