The Great Believers by Rebecca Makkai – an ‘expansive, huge-hearted novel that conveys the scale of the trauma of the early Aids crisis’
More about the book! 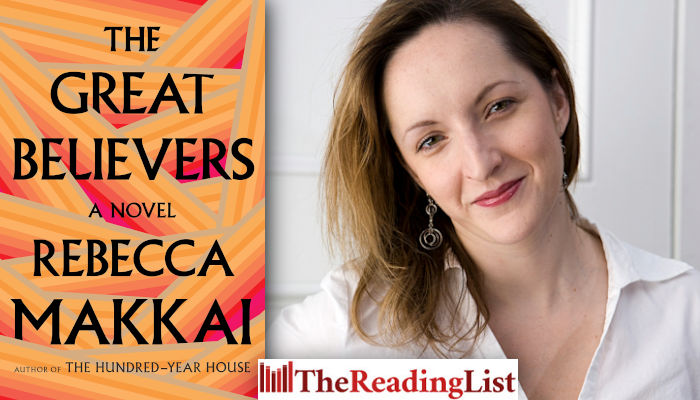 The Great Believers by Rebecca Makkai: two intertwining stories take us through the heartbreak of the eighties and the chaos of the modern world.

Makkai is the author of two novels – The Borrower and The Hundred-Year House – and a collection of short stories. Her short fiction won a 2017 Pushcart Prize, and was chosen for The Best American Short Stories for four consecutive years (2008-2011). The recipient of a 2014 NEA fellowship, Makkai is on the MFA faculties of Sierra Nevada College and Northwestern University, and she is the Artistic Director of StoryStudio Chicago.

‘A page turner … An absorbing and emotionally riveting story about what it’s like to live during times of crisis.’ – The New York Times Book Review

‘Sure to become a classic Chicago novel … a deft, harrowing novel that’s as beautiful as its cover.’ – Chicago Review of Books

‘This expansive, huge-hearted novel conveys the scale of the trauma that was the early AIDS crisis, and conveys, too, the scale of the anger and love that rose up to meet it.’ – Garth Greenwell, author of What Belongs to You

In 1985, Yale Tishman, the development director for an art gallery in Chicago, is about to pull off an amazing coup: bringing an extraordinary collection of 1920s paintings as a gift to the gallery. Yet as his career begins to flourish, the carnage of the Aids epidemic grows around him. One by one, his friends are dying and after his friend Nico’s funeral, he finds his partner is infected, and that he might even have the virus himself. The only person he has left is Fiona, Nico’s little sister.

Thirty years later, Fiona is in Paris tracking down her estranged daughter who disappeared into a cult. While staying with an old friend, a famous photographer who documented the Chicago epidemic, she finds herself finally grappling with the devastating ways the Aids crisis affected her life and her relationship with her daughter. Yale and Fiona’s stories unfold in incredibly moving and sometimes surprising ways, as both struggle to find goodness in the face of disaster.