The ‘biggest political exposé of the year’: The President’s Keepers by Jacques Pauw
More about the book! 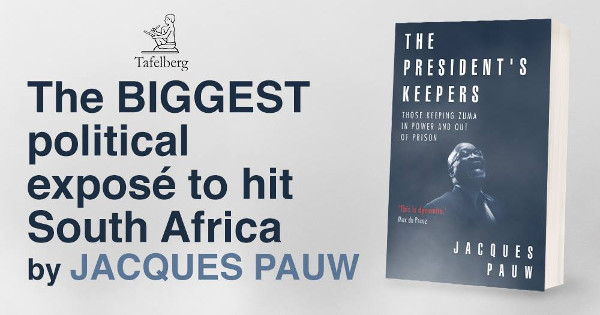 An explosive new book is making waves in South Africa.

In The President’s Keepers, investigative journalist Jacques Pauw exposes the darkest secret at the heart of Jacob Zuma’s compromised government: a cancerous cabal that eliminates the president’s enemies and purges the law-enforcement agencies of good men and women.

As Zuma fights for his political life following the 2017 Gupta emails leak, this cabal – the president’s keepers – ensures that after years of ruinous rule, he remains in power and out of prison. But is Zuma the puppet master, or their puppet?

Journey with Pauw as he explores the shadow mafia state. From KwaZulu-Natal and the Western Cape to the corridors of power in Pretoria and Johannesburg – and even to clandestine meetings in Russia. It’s a trail of lies and spies, cronies, cash and kingmakers as Pauw prises open the web of deceit that surrounds the fourth president of the democratic era.

‘An amazing piece of work, stuffed with anecdote and evidence. It will light fires all through the state and the ANC.’

‘This is dynamite. Dynamite that will shake the foundations of the halls of power.’

A number of explosive excerpts from the book have been published, and the Presidency has moved to reject the allegations:

‘He is a gangster like us’: New book reveals Zuma’s ‘darkest secret’

A self-confessed smuggler, fraudster and money launderer has emerged as a contributor to ANC presidential hopeful Nkosazana Dlamini-Zuma’s bid to replace her ex-husband, President Jacob Zuma.

This and other astounding information about secret payments to other members of the Zuma family, including the president and his son Edward, is contained in a sensational new book published today.

The President’s Keepers reveals among other things that:

Book Extract: Jacques Pauw’s The President’s Keepers – The gentleman gangster and his donkey

In this extract of a chapter of his latest book, The President’s Keepers – Those keeping Zuma in Power and out of Prison, JACQUES PAUW deals with the R388-million tax bill of Capeland gangster Mark Lifman and how the “new SARS regime” under the leadership of Tom Moyane let him off the hook. Named Project All Out and started in 2013, the Lifman investigation was driven by the National Projects Unit. This unit resided under Johann van Loggerenberg, but was entirely separate from the High-Risk Investigation Unit, which the media and Moyane branded as the “rogue unit”. This story illustrated the ultimate deceit and dishonesty of Moyane and his henchmen.

EXTRACT: The President’s Keepers – how the Guptas tried to capture Johan Booysen

In the winter of 2017, I again sat down with Johan Booysen, now employed as the head of investigations at Fidelity Security Group. He said he was doing basically the same as before – combating attacks on cash-in-transit vans and staff – but he was now wanted and respected. “We have to deal with the mess that Ntlemeza and his cronies have left behind,” said Booysen, referring to crime statistics that show that cash-in-transit heists and ATM bombings increased by 30 per cent between 2015 and 2017. “We are going to harvest their fruit for years to come. I believe I could have made a difference, had I been allowed.”

Journalist and author Pauw was a founder member of the anti-apartheid Afrikaans newspaper Vrye Weekblad in the late 1980s, where he exposed the Vlakplaas police death squads. He worked for some of the country’s most esteemed publications before becoming a documentary filmmaker, producing documentaries on wars and conflicts in Rwanda, Burundi, Algeria, Liberia, Sudan, the Democratic Republic of Congo and Sierra Leone, among other countries. When he left journalism in 2014, he was the head of investigations at Media24 newspapers. He has won the CNN African Journalist of the Year Award twice, the Daniel Pearl Award for Outstanding International Investigative Reporting in the US, Italy’s Ilaria Alpi and the Nat Nakasa award for bravery and integrity in journalism. He is the author of five books: four nonfiction and one fiction. They are In the Heart of Whore, Into the Heart of Darkness, Dances with Devils, Rat Roads and Little Ice Cream Boy. Three of his books have been shortlisted for major literary awards.