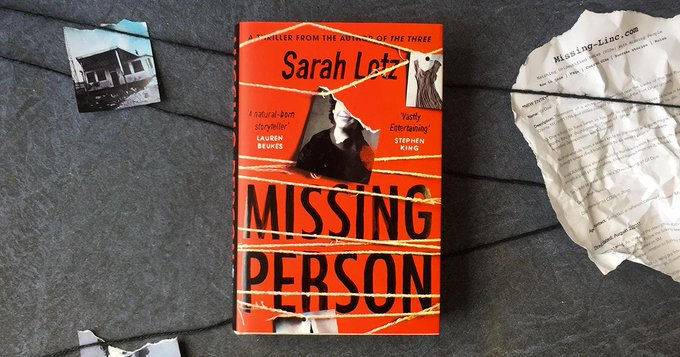 Stephen King says if you can’t concentrate on reading at the moment, he recommends Sarah Lotz’s novel Missing Person!

King and John Grisham held an online video chat yesterday to discuss their new novels, If It Bleeds and Camino Winds. (The event was free but the authors hope viewers will consider making a donation to Binc, the Bookseller Industry Charitable Foundation, here.)

During the conversation, Grisham mentioned how, like many people, he has been having trouble getting through his to-read pile during the coronavirus pandemic and quarantine.

‘I’m buying a lot of books to support my local [independent book] stores,’ Grisham said. ‘But I get diverted easily and I’ll hear some more bad news – how about you? Has it bothered you like that?’

King replied that he checks the news in the morning, but then prefers to stay away, and recommended Lotz’s novel as a great diversion:

‘You know how you feel sorry sometimes when a book ends?’ he said. ‘I read a novel by Sarah Lotz called Missing Person, and that’s one of those books.’

Published in 2019, Missing Person tells the story of a group of amateur detectives infiltrated by the sadistic killer whose crimes they’re investigating.

‘She sort of married a story about internet groups that search for missing people and dead bodies and that sort of thing, she married that to an Agatha Christie mystery story, and it worked!’ King said.

‘And I just loved the characters. I like stories about people who have strong bonds of friendship, and that had that for me. So I enjoyed that book very much.’

Sarah Lotz is a screenwriter and novelist who was born in England and currently lives there, but spent 20 years living in South Africa, which is where her writing career took off. She writes urban horror under the name SL Grey with South African author Louis Greenberg and wrote a quirky erotica series with authors Helen Moffett and Paige Nick under the name Helena S Paige. In 2017 it was announced that the BBC will adapt her solo The Three trilogy of novels as a major new eight-part drama.

Watch the full conversation between Stephen King and John Grisham here (Sarah Lotz is mentioned at 49:50):