Sometimes the darkest things happen under the sun – Read an excerpt from Fatal Inheritance by Rachel Rhys
More about the book! 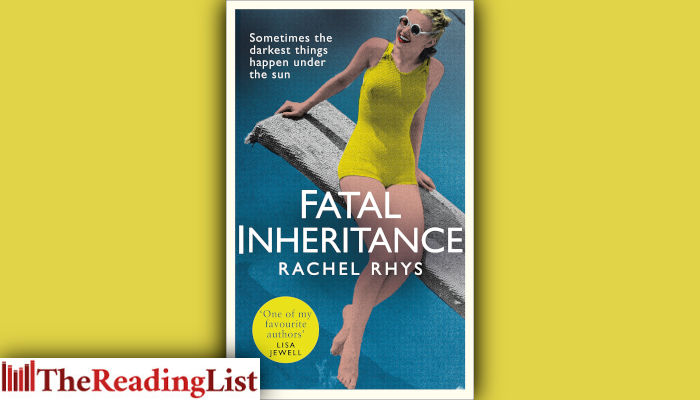 Penguin Random House has shared an excerpt from Fatal Inheritance by Rachel Rhys.

Fatal Inheritance is a novel about dysfunctional families and long-hidden secrets, set against a backdrop of all-day pool parties, cocktails and glamour on the seductive French Riviera.

She didn’t have an enemy in the world … until she inherited a fortune.

London 1948: Eve Forrester is trapped in a loveless marriage, in a gloomy house, in a grey suburb.

Out of the blue, she received a solicitor’s letter. A wealthy stranger has left her a mystery inheritance but in order to find out more, she must travel to the glittering French Riviera.

Eve discovers her legacy is an enchanting villa overlooking the Mediterranean sea and suddenly, life could not be more glamorous.

But while she rubs shoulders with film-stars and famous writers, under the heat of the golden sun, rivals to her unexplained fortune begin to emerge. Rivals who want her out of the way.

Alone in paradise, Eve must unlock the story behind her surprise bequest – before events turn deadly …

Read an excerpt from Fatal Inheritance:

If Vera arrives before Harry her whole life will change. Eve watches and waits. Really she ought to be outside, whipping sheets off the line before they are completely sodden, but her limbs remain pinioned to the sofa. Her eyes follow the progress of the two raindrops down the pane of glass until they pool together at the bottom, Vera merging into Harry, having not, after all, triumphed. A fleeting tug of disappointment.

But hadn’t she intended it to be the best of three? Most assuredly she had.

Eve scans the top of the window until she locates two more likely looking drops whom she names Bert and Louisa. But before they reach the bottom, she is disturbed by the shrill ringing of the bell.

Mr Ward, the postman, has a florid round face which is forever glazed with some form of precipitation, whether perspiration from the summer heat or, as now, a steady drizzle of rain. He is friendly and nosy and always seems to be expecting something more from his interactions with Eve than she is able to give.

‘One for you in there,’ he says, handing over a stack of envelopes.

Eve’s heart sinks. The only person who writes to her is her mother and she does not think she has the fortitude today to withstand the force of her mother’s disappointment.

Mr Ward is lingering on the step as if he expects her to open her letter right there and share the contents with him. But Eve is in no hurry.

‘Thank you, Mr Ward,’ she says, closing the door so he is caught out mid-mop with his white handkerchief aloft.

Eve flings herself back down on to the lumpy sofa, but she cannot recapture the pleasant indolence of a few minutes before. Even though the letters are safely hidden from view on the table in the hall, the knowledge of them is like a persistent insect buzzing in her ear.

She glances up at the ugly grandfather clock on the opposite wall. All the furniture is Clifford’s. Dark, heavy pieces that originated from his grandparents’ house and that his grim-faced father reluctantly passed on after she and Clifford married, observing that as Eve most likely didn’t know the first thing about caring for furniture of such quality, they would no doubt fall into wrack and ruin.

Chance would be a fine thing.

It is 12.15. Apart from the fifteen minutes from four o’clock when she can lose herself in Mrs Dale’s Diary on the wireless, the remaining hours of the day stretch ahead long and empty, the silence punctuated only by the tick-ticking of the hideous clock.

At 5.40 Clifford will come home. There will be the usual flurry of anticipation – company, conversation – followed by the inevitable downward readjustment when Clifford settles into his armchair, right leg crossed over left, newspaper hiding his face, the only hint of animation provided by the occasional twitch of his right shoe, shined every Sunday evening.

When they were first married she used to fling herself on to the floor by his chair and question him about his day, about what was in the news. But he had soon curtailed that. ‘My dear, I am a company director. My entire day is taken up by people asking things of me. When I come home, I should so appreciate a little bit of quiet. I’m sure you can understand.’

So now she waits until dinner time.

The rain seems to have drained away, leaving behind a grey soupy day. Through the bay window she can see the opposite bay window of Number Thirty-Nine. A mirror image of this house. Semi-detached with a garage to the side and a neat front path leading up to the leaded glass-panelled front door. Two elderly sisters live there whom, even nearly two years on, Eve still knows only as the Misses Judd. Sometimes she will see one or other of the Misses Judd standing at one of the upstairs windows, gazing out on to the street. I will go over there, she tells herself on these occasions. Who knows what stories they will have to tell. We might become friends. But she never does.

Awareness of her mother’s letter waiting on the hall table weighs heavily on her. Eventually she can stand it no longer. She gets to her feet and makes her way across the sitting room with its thick wine-coloured carpet and once more out into the hall, where she snatches up the pile of envelopes and searches impatiently through all the letters addressed to Mr C Forrester until she comes to one with her own name.

In place of her mother’s cramped, precise handwriting in blue ink on the usual thin, pale blue envelope, there is a typed address on thick yellowy paper. Mrs Eve Forrester.

Eve feels a faint tingling in her nerve endings. She replaces the rest of the envelopes and wanders back into the sitting room. The drawing room, as Clifford insists on calling it. As always when she crosses the threshold, there is a sense of the air being displaced, as if she is walking into a solid mass and pushing it out of shape.

She resumes her place on the sofa, only this time her back is straight, and she perches on the very edge of the cushion with her feet firmly on the floor.

Silly, she scolds herself. To get excited about a letter.

She slits open the envelope to find a satisfyingly thick sheet of manila folded in three. She takes her time about opening it up and notes first the letterhead printed in bold at the very top of the page.

The print is slightly embossed and she runs her fingertip over the raised letters.

She takes a deep breath, and reads on.

‘Are you certain there has been no mistake?’

Clifford is looking at her in a way that clearly suggests a mistake has indeed been made and that it will turn out to be hers.

‘The letter is definitely addressed to me. And there can be no confusion about what it says. I am requested to present myself at the firm’s offices in London next Tuesday to hear something to my advantage. Isn’t that deliciously mysterious?’

‘It’s deuced inconvenient, is what it is. I have an important meeting next Tuesday.’

‘So you intend to come?’

Clifford blinks at her as if she has begun, for reasons quite her own, to talk in Swahili.

‘Of course I must come. This whole business sounds fishy. We have no idea who these Pearson and Wilkes are or whom they represent. For all we know this could turn out to be some sort of racket and I’m afraid you, my dear, are a sitting duck. Don’t forget, Eve, that you moved here straight from your mother’s house. You have very little experience of looking out for yourself.’

Clifford is in the middle of eating and a white crumb of potato is lodged in his moustache. Eve watches the crumb move up and down as he speaks. Already she feels the excitement of earlier trickling away.

In the end, then, it is to turn out to be a mistake. A racket, as Clifford says. They will come back from London and everything will be just the same as it ever was.

‘But they are offering to cover all travel costs,’ she remembers now. ‘Would they do such a thing if there was something underhand about the whole affair?’

Clifford, who has paused with his fork halfway to his lips, now resumes his original intention, delivering a brown lump of liver into his mouth. It seems to take for ever to chew. Mrs Jenkins, who comes in two mornings a week to cook and clean, does not believe in lightness of touch when it comes to preparing meat dishes. ‘Who knows what germs they could be harbouring,’ she said the one time Eve dared ask if they might have their precious chops, still rationed even three years after the war, just a little less well done. Clifford swallows and Eve follows the progress of the lump down her husband’s throat. Finally he speaks.

‘The first rule of business is that you never trust anyone until they have proved themselves deserving of your trust, and that is a good rule to apply in life, Eve. Otherwise you will be taken advantage of. I will do my best to rearrange my meeting so that I may accompany you.’

He dabs the corners of his mouth with his napkin, dislodging the crumb. As usual, his blue eyes, so close together that at times they almost seem to cross over, remain fixed on a point just past Eve’s shoulder, so she feels she is always ceding attention to someone just behind her.