‘She was with you in Durban, wasn’t she?’ Read an excerpt from Theo and Flora, the new novel from Mark Winkler
More about the book! 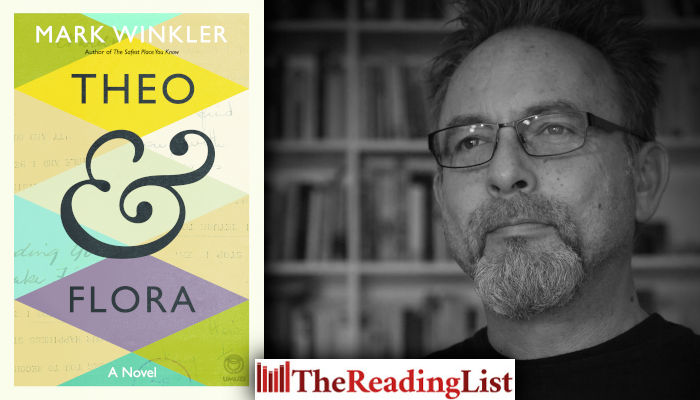 If you’re still waiting to pick up your copy of Theo & Flora by Mark Winkler, here’s an extract to keep you going!

When stalled novelist Charlie Wasserman’s investment-banker wife divorces him, he finds among her belongings a box of letters. Written between 1940 and 1944, the letters reveal a love affair between her grandfather, Theo, a forty-something lawyer at the time, and Flora, a much younger journalist.

Even though Wasserman’s ex-wife has her lawyers instruct him to destroy the letters, an idea for a new book – a novel that could rekindle his career – is sparked.

As Wasserman’s preoccupation with the story of Theo and Flora grows, their lives unfurl in a symphony of brilliant detail against the backdrop of 1940s Cape Town and the war in Europe. In finely crafted prose full of wit and poignancy,

Theo & Flora showcases the skill of one of South Africa’s great contemporary novelists.

It is silent, but for the ticking of the clock on the sideboard and the sharp sounds of metal on porcelain as Sarah dishes up dinner.

Silver pours himself a glass of wine, a Beaujolais. The colour will complement the lamb, the lightness counter the swelling heat. Sarah puts a plate in front of him, on it a wedge of meat carved with the grain, a roast potato, carrots, peas – all of it, he divines, cooked until perfectly devoid of flavour. Sarah sits, pours herself a tumbler of water from a jug beaded with condensation. Silver saws a small piece from the lump of lamb on his plate, spears it with a fork and balances a few peas upon it. He chews, and is not surprised at the time and effort it takes to break down the mouthful to a point where he can swallow it. He smooths its path with a mouthful of wine, which unhappily is slightly corked, and looks at his wife.

Sarah sniffs. She glances at the window, perhaps through it, to the light of the evening sun playing in the Norfolk pines, and ignores the question about their son.

‘She was with you in Durban, wasn’t she?’

Silver says nothing, concentrates on hacking at the meat on his plate. He dislodges the lamb from his fork, pushes it aside, bisects a carrot with his knife. It is watery, cooling on the outside, hot at the core, lacking in salt, pepper, anything that might provide a little flavour.

‘You know it was a Party convention,’ he says. Any mention of politics, he knows, will prompt Sarah towards another topic. ‘A debate, mostly, on how we communists could collaborate more effectively over distances, given the disruptions of the War.’

‘You bloody pig, Theodore. How dare you carry on with that woman? You are a husband and a father and a provider to your family.’ She glares at him. ‘What are people saying?’

Silver sets his knife and fork on his plate and stares at them. It strikes him that, were the plate the face of a clock, the cutlery would put the time at twenty to four, although in reality it is almost six-thirty. His people, does she mean – the proletariat, the disenfranchised and abandoned for whose rights he battles, or the artists and writers and thinkers who have become his closest friends? Or does she mean her people? Because they are not the same – her people are those whose goal in life is to live as little as possible, who go to shul to thank their God for their factories and dental practices, or otherwise to berate Him because He has caused them to fail at being ostrich
farmers or obstetricians or architects, or has cursed them with a difficult child or an inability to make love: people whose lives are determined by convention, who measure themselves by their own narrowness and by the weight of tradition. His people were already ‘saying’, and what they said was exactly what Silver wanted to hear; he is certain that hers were saying something else entirely.

Silver adjusts his cutlery to the six-thirty position, nudges his plate away, stands, drops his napkin onto the table.

As he reaches the door, Sarah points her fork at his back, its tines aimed at the boniness between his shoulder blades. ‘I will never give you the pleasure,’ she says and her voice is shrill and quavering. ‘Neither of you, not you nor your whore.’

Sarah arranges on her fork a piece each of lamb, carrot, potato. She puts the lot into her mouth; it is too much, she realises as she chews. She wipes the thin juices from her chin, swallows hard, washes the food down with a sip of water.

If you're still waiting to pick up your copy of Theo & Flora by Mark Winkler, here's an extract to keep you going: https://bit.ly/2Q6H8hz