‘She knows her place.’ Read an excerpt from Quraisha Dawood’s debut novel Stirring the Pot
More about the book! 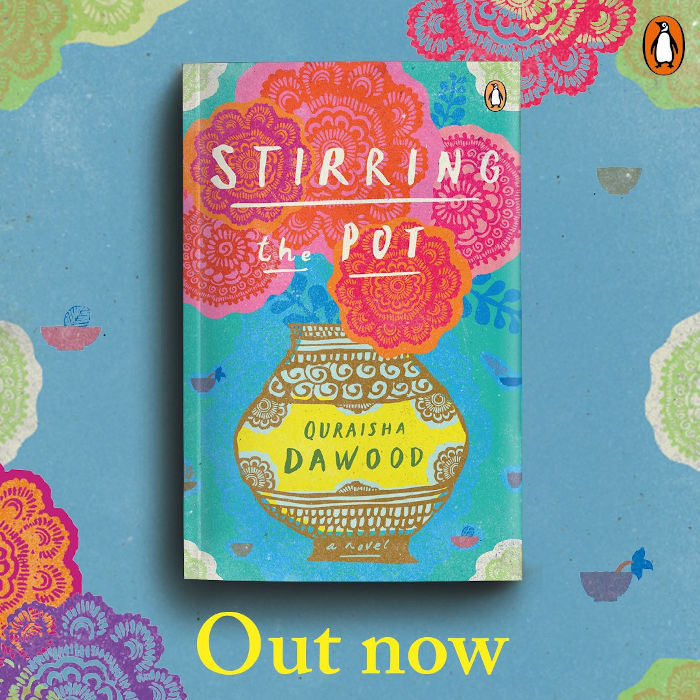 Penguin Random House has shared an extract from Stirring the Pot, the debut novel by Quraisha Dawood.

Dive into this swirl of madams and maids, women and their husbands, children, grandchildren, and in-laws, a world bristling with life and vitality, amid judgements and forgiveness, secrets and lies, expectations and disappointments.

Prepare for a wedding, a theft, Ramadaan, and a passing, while delicious recipes for traditional cuisine add local spice to life at Summer Terrace …

Violet had been Aunty Banu’s maid for many years. Seemingly sweet, old Aunty Banu often praised Violet loudly while talking to Ruki across the doughnut hole. In doing so, she somehow often managed to praise herself as a madam. ‘You know, I don’t even insist she wears a uniform. That’s how fair I am,’ she would say. ‘We’re all women at the end of the day, heh? Why must I worry as long as she cleans nicely, isn’t it?’ She would nod her head as if in agreement with herself. ‘You know, these young maids talk back. They come with their weaves and fake nails, and they want to eat from a porcelain plate. No, no. My Violet, she won’t even touch my cup, she will eat what I give her …’

It would go on regularly, while the other women smiled and nod­ded. Talking back to an elder would have elicited a worse reaction than speaking up for a maid. You had to weigh up these things.

As much as she ‘praised’ her in public, Aunty Banu patronised Violet in private. She preached about equality and sisterhood, but when there was furniture to move, endless grocery packets to carry or a grimy toilet to be scrubbed, those bonds of sisterhood evaporated.

Once, when Violet was washing her madam’s bathroom floors by using a mop, bending over to wring out the grey strands, rather than getting down on her hands and knees to do the job, Aunty Banu had loomed questioningly over her.

‘I have my period,’ Violet had mouthed to her.

‘I don’t pay you to worry about your monthlies!’ Aunty Banu had screeched, the sound from the bathroom windows echoing through the corridors. For the rest of the day Aunty Banu had complained to anyone who would listen that Violet was slow and moody, as if she was a petulant child and not a forty-year-old woman.

Violet never exacted her revenge overtly, but now and then she left certain things in places she knew Aunty Banu would never think of looking: her reading glasses in the washing basket, or her wudhu sandals in the sons’ cupboard. For Violet, there was a Machiavellian satisfaction in seeing Aunty Banu doubt her own mind or spend a fortune replacing these items. A few days after the purchase, Violet would emerge with the lost item saying, innocently, ‘Medem, look what I found!’

Aunty Banu’s husband and three sons were no better, all add­ing their abuse to Violet’s burden of resentment. She carried this load until the evening, when she would swear about her madam in the maids’ quarters and wash all the day’s residue away in the tiny shower.

The next day, she would be back at 7 a.m. at Aunty Banu’s because she had no other option. What a good maid, some of the madams thought. She knows her place.

Then one day Aunty Banu and her family were out for the morning when there was a knock on the door. Answering it, Violet straightened up and stared at Shirin through the gate like a defen­sive meerkat, soap suds braceleting her wrists. ‘Err, my medem is not here.’

‘That’s fine.’ Shirin had shooed the response away like a fly. ‘I just need to borrow some dhania. Can you check if she has some to spare?’

Violet had let her in. ‘Let me just wash my hands,’ she’d said.

Shirin had stood in the entrance and taken in the flat, with its endless loads of clean laundry to iron, and its old wooden cup­boards and peeling paint.

Violet had given Shirin half a bunch of dhania and somehow, in exchange, a R200 note had appeared in her hand. Violet looked confused.

‘I’m looking for a girl. I pay well and there’s only two of us at home,’ Shirin had said curtly.

That was all it had taken for Violet to show up at 7 a.m. the next day at another madam’s door.

Many shady things had happened between neighbours under the guise of borrowing dhania but in this building this was the worst offence – stealing a maid. Aunty Banu was livid. Her small, wrinkly face was ablaze as sweat collected in the lines around her hollow cheeks and she radiated red rage.

Violet had expected this. Nothing stayed secret in this place for long. That’s why she kept her family in Umlazi and her business of selling clothes separate from her work in Summer Terrace.

A few neighbours had popped their heads out of their front doors to watch the drama. Ruki and Aunty Julie tried to calm Banu down in the corridor. ‘That’s why you mustn’t praise your maid. They get a big head. And other people want them,’ Aunty Julie had said.

Ruki rolled her eyes. ‘It’s Shirin. She just wants to upset you. Don’t worry, hah. We will find you a good maid. You just relax now. See, you’re getting all worked up.’

Since then, madams had become protective of their maids, even to the extent of treating them better, while warning them not to talk to Violet or Shirin. It was clear that Shirin was not to be trusted. The incident clarified the boundaries between madams, and Shirin had basked in her notoriety for the last few years, like a cat in the sunshine.