Read an excerpt from Miss Benson’s Beetle – a funny, heartwarming and magical read that’ll lift your spirits
More about the book! 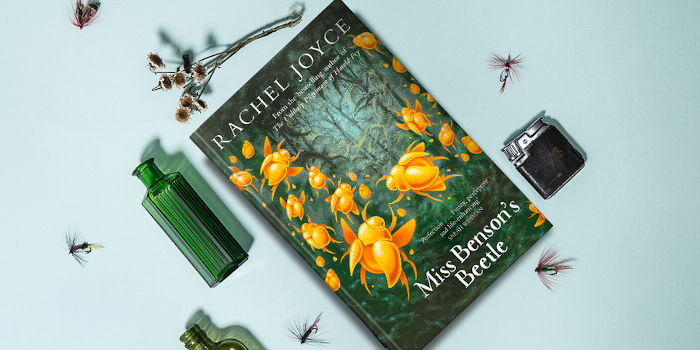 Penguin Random House SA has shared an excerpt from Miss Benson’s Beetle, an uplifting and redemptive story of a glorious female friendship against the odds, from Rachel Joyce, the author of The Unlikely Pilgrimage of Harold Fry and The Music Shop.

A story about the smallest insect and the deepest friendship.

Margery Benson’s life ended the day her father walked out of his study and never came back. Forty years later, abandoning a dull job, she advertises for an assistant. The successful candidate is to accompany Margery on an expedition to the other side of the world to search for a beetle that may or may not exist. Enid Pretty is not who she had in mind. But together they will find themselves drawn into an adventure that exceeds all Margery’s expectations, eventually finding new life at the top of a red mountain.

This is a story that is less about what can be found than the belief it might be found; it is an intoxicating adventure story and it is also a tender exploration of a friendship between two unforgettable women that defies all boundaries.

The Golden Beetle of New Caledonia, 1914

When Margery was ten, she fell in love with a beetle.

It was a bright summer’s day and all the windows of the rectory were open. She had an idea about sailing her wooden animals across the floor, two by two, but the set had belonged to her brothers once and most of them were either coloured-in or broken. Some were even missing altogether. She was wondering if in the circumstances you could pair a three-legged camel and a bird with spots when her father came out of his study.

‘Do you have a moment, old girl?’ he said. ‘There’s something I want to show you.’

So she put down the camel and the bird, and she followed him. She would have stood on her head if he’d asked.

Her father went to his desk. He sat there, nodding and smiling. She could tell he didn’t have a proper reason for calling her: he just wanted her to be with him for a while. Since her four brothers had left for war, he often called her. Or she’d find him loitering at the foot of the stairs, searching for something without seeming to know what it was. His eyes were the kindest in the world and the bald top of his head gave him a naked look, like an egg.

‘I think I have something that might interest you, old girl,’ he said. ‘Nothing much but maybe you will like it.’

At this point he would normally produce something he’d found in the garden, but instead he opened a book called Incredible Creatures. It looked important, like the Bible or an encyclopaedia, and there was a general smell of old things but that could well have been him. Margery stood at his side, trying hard not to fidget.

The first page was a painted illustration of a man. He had a normal face and normal arms but, where his legs should have been, a green mermaid tail. She was amazed. The next picture was just as strange. A squirrel like one in the garden, but this had wings. And it went on, page after page, one incredible creature after another.

‘Oh, no, dear heart. If these creatures live, they’ve not been found. There are people who believe they exist, but they haven’t caught them yet so they can’t prove it.’

She had no idea what he was talking about. Until that moment she’d assumed everything in the world was already found. It had never occurred to her things might happen in reverse. That you could see a picture of something in a book – that you could as good as imagine it – and then go off and look.

Her father showed her the Himalayan Yeti, the Loch Ness Monster, the Patagonian Giant Sloth. There was the Irish Elk with antlers as big as wings. The South African Quagga, which started as a zebra until it ran out of stripes and became a horse. The Great Auk, the Lion-tailed Monkey, the Queensland Tiger. So many incredible extra creatures in the world and nobody had found a single one of them.

‘Do you think they’re real?’ she said.

Her father nodded. ‘I have begun to feel comforted,’ he said, ‘by the thought of all we do not know, which is nearly everything.’ With that upside-down piece of wisdom, he turned another page. ‘Ah!’

He pointed at a speck. A beetle.

Well, how nothing this was. How small and ordinary. She couldn’t see what it was doing in a book of incredible creatures, never mind whether it was not yet found. It was the sort of thing she would tread on and not notice.

He told her the head of a beetle was called the head, the middle was the thorax and the bottom half was the abdomen. Beetles had two pairs of wings – did she know that? One delicate set that did the actual flying, and another hardened pair to protect the first. There were more kinds of beetle on God’s Earth than any other species, and they were each unique in remarkable ways.

‘It looks a bit plain,’ she said. Margery had heard her aunts call her plain. Not her brothers, though. They were handsome as horses.

He turned to the next page and her insides gave a lurch.

Here the beetle was again, magnified about twenty times. And she had been wrong. She had been so wrong, she could hardly believe her eyes. Close up, that small plain thing was not plain, not one bit. Oval in shape and gold all over, it was incandescent. Gold head, gold thorax, gold abdomen. Even its tiny legs were gold, as if Nature had taken a bit of jewellery and made an insect instead. It was infinitely more glorious than a man with a tail.

‘The Golden Beetle of New Caledonia,’ said her father. ‘Imagine how it would be to find this one, and bring it home.’

Before she could ask more, there was a ring on the outside bell and he eased himself to his feet. He closed the door gently behind him, as if it had feelings, and left her alone with the beetle. She reached out her finger to touch it.

Until now, Margery hadn’t shared her father’s love of insects – he was often in the garden with a sweep net, but it was more the sort of thing he would have done with her brothers. Yet as her finger met the golden beetle, something happened: a spark seemed to fly out and her future opened. She went hot and cold. She would find the beetle. It was that simple. She would go to wherever New Caledonia was, and bring it home. She actually felt struck, as if the top of her head had been knocked off. Already she could see herself leading the way on a mule while an assistant carried her bags at the rear.

But when the Reverend Tobias Benson returned, he didn’t seem to remember anything about the beetle, let alone Margery. He walked slowly to the desk and rifled through papers, picking them up and putting them down, as if none of them were the things they should have been. He lifted a paperweight, then a pen, and afterwards he stowed the paperweight back where the pen had been, while the pen he seemed to have no clue about. It was possible he had completely forgotten what a pen was for. He just stared, while tears fell from his eyes like string.

He took something from the drawer and stepped through the French windows, and before she realized what had happened, he’d shot himself.