Read an excerpt from Malcolm Gladwell’s new book, Talking to Strangers: What We Should Know about the People We Don’t Know
More about the book! 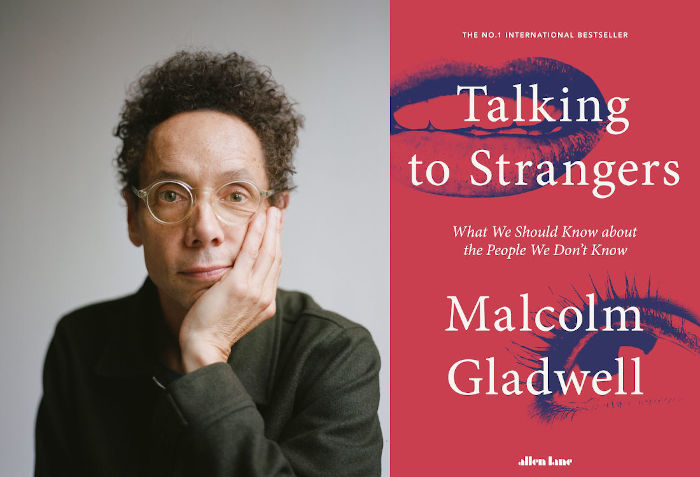 Penguin Random House has shared an excerpt from Talking to Strangers, the new book by Malcolm Gladwell.

How did Fidel Castro fool the CIA for a generation? Why did Neville Chamberlain think he could trust Adolf Hitler? Why are campus sexual assaults on the rise? Do television sitcoms teach us something about the way we relate to each other that isn’t true?

In Talking to Strangers: What We Should Know about the People We Don’t Know, Malcolm Gladwell offers a powerful examination of our interactions with strangers, and why they often go wrong.

The genesis of the book, as Gladwell explains in the following excerpt, was the death of Sandra Bland.

On the afternoon of July 10, 2015, Sandra Bland was pulled over by a Texas State Trooper named Brian Encinia for failing to indicate while changing lanes. (She claimed to have changed lanes to get out of the way of Encinia, who was tailing her closely in his patrol car.) The conversation between the two began calmly, but escalated into an argument, culminating in Encinia attempting to remove Bland from the car by force and arresting her. Bland was taken into custody on felony assault charges, and three days later she was found dead in her cell, hanging from a noose made from a plastic bag.

An employee of the Department of Public Safety shall be courteous to the public and to other employees. An employee shall be tactful in the performance of duties, shall control behavior, and shall exercise the utmost patience and discretion. An employee shall not engage in argumentative discussions even in the face of extreme provocation.

The lesson we are expected to take from the incident, Gladwell suggests, is that when police talk to strangers they should be polite and respectful.

In the book, he re-examines the deceptions of Bernie Madoff, the trial of Amanda Knox, the suicide of Sylvia Plath, and the Jerry Sandusky paedophilia scandal at Penn State University, and argues that something is very wrong with the ways in which we try to make sense of the people we don’t know. ‘And because we don’t know how to talk to strangers,’ he says, ‘we are inviting conflict and misunderstanding in ways that have a profound effect on our lives and our world.’

Talking to Strangers is described as a ‘classically Gladwellian intellectual adventure, a challenging and controversial excursion through history, psychology, and scandals taken straight from the news’.

The Sandra Bland case came in the middle of a strange interlude in American public life. The interlude began in the late summer of 2014, when an eighteen-year-old black man named Michael Brown was shot to death by a police officer in Ferguson, Missouri. He had just, allegedly, shoplifted a pack of cigars from a convenience store. The next several years saw one high-profile case after another involving police violence against black people. There were riots and protests around the country. A civil rights movement, Black Lives Matter, was born. For a time, this was what Americans talked about. Perhaps you remember some of the names of those in the news. In Baltimore, a young black man named Freddie Gray was arrested for carrying a pocket knife and fell into a coma in the back of a police van. Outside Minneapolis, a young black man named Philando Castile was pulled over by a police officer and inexplicably shot seven times after handing over his proof of insurance. In New York City, a black man named Eric Garner was approached by a group of police officers on suspicion that he was illegally selling cigarettes, and was choked to death in the ensuing struggle. In North Charleston, South Carolina, a black man named Walter Scott was stopped for a nonfunctioning taillight, ran from his car, and was shot to death from behind by a white police officer. Scott was killed on April 4, 2015. Sandra Bland gave him his own episode of [her YouTube channel] “Sandy Speaks.”

Good morning, my beautiful Kings and Queens … I am not a racist. I grew up in Villa Park, Illinois. I was the only black girl on an all-white cheerleading squad … Black people, you will not be successful in this world until you learn how to work with white people. I want the white folks to really understand out there that black people are doing as much as we can … and we can’t help but get pissed off when we see situations where it’s clear that the black life didn’t matter. For those of you who question why he was running away, well goddamn, in the news that we’ve seen of late, you can stand there and surrender to the cops and still be killed.

Three months later, she too was dead.

Talking to Strangers is an attempt to understand what really happened by the side of the highway that day in rural Texas.

Why write a book about a traffic stop gone awry? Because the debate spawned by that string of cases was deeply unsatisfying. One side made the discussion about racism – looking down at the case from ten thousand feet. The other side examined each detail of each case with a magnifying glass. What was the police officer like? What did he do, precisely? One side saw a forest, but no trees. The other side saw trees and no forest.

Each side was right, in its own way. Prejudice and incompetence go a long way toward explaining social dysfunction in the United States. But what do you do with either of those diagnoses aside from vowing, in full earnestness, to try harder next time? There are bad cops. There are biased cops. Conservatives prefer the former interpretation, liberals the latter. In the end the two sides canceled each other out. Police officers still kill people in this country, but those deaths no longer command the news. I suspect that you may have had to pause for a moment to remember who Sandra Bland was. We put aside these controversies after a decent interval and moved on to other things. I don’t want to move on to other things.