Read an excerpt from Kate Mosse’s new book, The Burning Chambers, inspired by her trip to Franschhoek
More about the book! 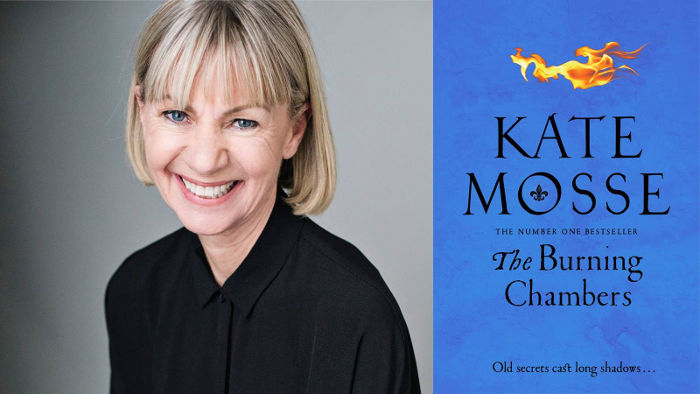 Read an excerpt from Kate Mosse’s new book, The Burning Chambers, ahead of her events in Cape Town.

Mosse will visit Exclusive Books Cavendish and the Franschhoek Literary Festival this week.

Mosse last visited the Franschhoek Literary Festival in 2013, and her time in the Cape inspired her new series of historical novels, beginning with The Burning Chambers.

The series will cover three centuries and travel the world from Carcassonne to Southern Africa.

Read an excerpt from The Burning Chambers:

The woman stands alone beneath a sharp blue sky. Evergreen cypress and rough grasses bound the graveyard. The grey headstones are bleached the colour of bone by the fierce Cape sun.

She is tall, with the distinctive eyes of the women of her family going back generations, though she does not know it. She bends forward to read the names and dates on the tombstone, obscured by lichen or moss. Between her high white collar and the dust-caked brim of her leather hat, the white skin on the back of her neck is already burning red. The sun is too strong for her European complexion and she has been riding across the veldt for days.

She removes her gloves, folding one inside the other. She has mislaid too many to be careless and, besides, how would she acquire another pair? There are two general stores in this hospitable frontier town but she has little left with which to barter and her inheritance is gone, spent on the long journey from Toulouse to Amsterdam, then from Amsterdam to the Cape of Good Hope. Every last franc has been spent on provisions and letters of introduction, hiring horses and a trustworthy guide to lead her through this unfamiliar land.

She drops the gloves to the ground at her feet. A powder of copper-red Cape dust puffs into a cloud, then settles. A black beetle, hard-backed and resolute, scuttles for cover.

The woman draws breath. At last, she is here.

She has followed this trail from the banks of the river Aude and the Garonne and the Amstel, over the wildest seas to where the Atlantic Sea meets the Indian Ocean, to the Cap de Bonne Espérance.

Sometimes the trail has blazed bright. The story of two families and a secret passed down from generation to generation. Her mother and grandmother, then further back to her great-grandmother and her mother before that. Their names have been lost, taken up in those of their husbands and brothers and lovers, but their spirits live in her. She knows it. Finally, her quest ends here. In Franschhoek.

The woman removes her leather riding hat and fans herself, the wide brim shifting the blistering air. There is no respite. It is as hot as an oven and her flaxen hair is dark with sweat. She cares little for her appearance. She has survived the storms, the assaults on her reputation and her person, the theft of her possessions and the loss of friendships that she had thought were built to last. All to bring her here.

To this unkempt cemetery in this frontier town.

She undoes the buckle on her saddlebag and reaches inside. Her fingers skim the small antique bible – a talisman she carries with her for luck – but it is the journal she pulls out: a soft tan leather cover, held shut by a thin cord wrapped twice around it. Tucked inside are letters and hand-drawn maps, a Will. Some pages are loose, their corners spiking out like the points of a diamond. This is the record of her family’s quest, the anatomy of a feud. If she is right, this sixteenth-century notebook is the means to claim what is rightfully hers. After more than three hundred years the fortunes and the good name of the Joubert family will, finally, be restored. Justice will be done.

If she is right.

Pitch to Publication presentations pay off, for both publishers and writers