Read an excerpt from Corporation Games by Anneleigh Jacobsen – a thriller based on real-life financial scandals
More about the book! 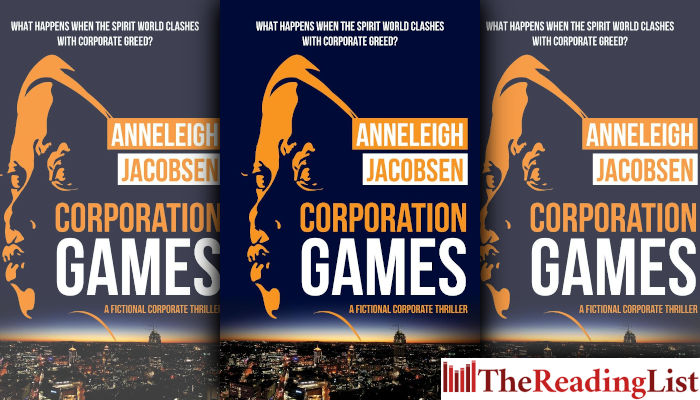 Tokoloshes have been sent to sniff out evil in Sandton in Anneleigh Jacobsen’s debut novel, Corporation Games. In her novel, she pits the sex, money and greed of the corporate world against the quiet resilience of rural people.

Anneleigh used to be a brand manager in Sandton, representing some of South Africa’s biggest corporations, and her corporate thriller is based on a number of real-life financial scandals that have rocked South Africa.

In the excerpt below, we meet brand manager Georgie and receptionist Sindiswa, who can see tokoloshes creep along the walls in whispers.

Georgie paused on the steps in the warmth of the mid-afternoon Joburg sun and looked up at the gleaming new signage above the automated sliding glass doors.

She checked the watch on her left wrist, careful not to drop the laptop or the trendy hipster leather folder that had been a gift from some agency, and then went up the stairs, her Nine Wests gently clipping her into the hushed coolness of her company’s reception area.

The marble and suede sleekness of the interior was so different to the factory she’d been in this morning. Here, behind doors that closed quietly in the carpeted interiors, at glossy boardroom tables or in oversize armchairs, was where directors with seven-figure annual bonuses posed for website profile shots with their cosmetic-dentistry smiles.

It was here where she was part of a team that had to bring new products to market at lightning speed, or as fast as corporate process allowed, anyway.

Sindiswa, not a hair out of place beneath the high-end headset, looked up and nodded at Georgie walking over to the reception desk that seemed to hang in the vast space. Sindi transferred the call.

Georgie smiled. ‘Good morning. You’re looking gorgeous as ever. How are things in the ivory tower this morning?’

Sindi laughed. ‘You are so good for my ego, Ms Richardson.’

‘So, are they all in today?’ Georgie asked.

Sindi nodded and glanced around briefly to see if anyone had come out of the lift that lead to the plush executive offices on the fifth floor of the building, the top floor.

‘Yes, they’re all in now. Some of them,’ she paused for effect, ‘only got in at lunchtime.’

‘Wonder what they’ve been up to after hours.’

Sindi leaned forward imperceptibly, her perfectly manicured fingers spread out on the desk towards the other woman. She took a slightly deeper breath and then, her voice low, she said. ‘The tokoloshes are in too.’ Her shoulders hunched a little, protecting the sentence in the air.

Georgie could hear the strain under the words. ‘The same ones?’

Sindi nodded, crossing her arms and rubbing her upper arms.

‘They’re still in the corners, but sometimes they creep along the walls in whispers.’ She dropped her chin, keeping her breath to herself a little more. ‘I think there are more of them now,’ she said, checking if Georgie was listening. Georgie hadn’t moved. She could feel the quiet cold fear in Sindi.

‘Keep watching them,’ she said, putting a hand on Sindi’s shoulder. ‘As long as you see them there, they know that someone is watching.’

The email came from Sindi mid-afternoon. No message in the body, just a couple of words in the subject line.

What it really meant was keep your head down.

Georgie slid lower in the chair and moved slightly to the right ensuring that she was well behind the over-zealous potted ficus on the corner of her desk and somewhat protected by the black privacy and modesty boards of her cubicle. Their naming made her laugh the first time she’d heard the office designers use them. The boards themselves implied that privacy was all in the head and that modesty started just above the ankles.

She tried not to watch the door but heard the lift ping and the security tag buzz as it allowed him in, so she glanced up and then ducked right back down, holding her breath as she saw his gaze swing smoothly in her direction.

‘Ms Richardson,’ said Jake seconds later. He always emphasised the z-sound of the ‘Ms’. ‘I hope you have good news for us today.’

‘Oh, hi,’ she said, trying to keep her voice even. ‘I didn’t hear you arrive.’ She didn’t think she sounded convincing. The frisson between them was established, though neither had ever broached it.

Jake was barely forty, but he’d already efficiently painted himself into his corner-office-and-tailored-suit lifestyle. He was British and blue-eyed, with a broad jaw line and a voice that was deeper than expected. He was engaging, smart, appropriate and laconic.

She reached for her documents folder.

‘We’re in executive boardroom number one. Shall I meet you there in a minute? There’s something I’d like to chat to you about before the meeting starts.’

As he walked away, she stood at her desk, hands resting alongside her computer, and breathed out slowly. She stared blankly at the screen and then closed it, gathering her notes and diary to follow him.

He was standing at the full-length windows of the meeting room, the leafy, sun-drenched neighbourhood on display beyond the glass. She often wondered whether the choice of Hyde Park had been accidental or a sign of nostalgia on the part of the expats on the board.

‘Enjoying the view?’ she asked as she walked in, composure regained.

‘Yes, actually.’ He walked towards her from the window. She hadn’t noticed, against the glare from outside, that he had been facing into the room and not looking out through the window. ‘I like the views here very much. They’re fairly rare.’

She pretended not to have noticed the implication, and busied herself setting up the laptop and making it talk to the data projector that always seemed to be waging an active and militant campaign against her in this meeting room. Some days she was tempted to take off a stiletto and hammer the computer into submission, but that would probably just ruin a perfectly lovely shoe and nothing more.

‘What did you want to tell me?’ he asked from across the room. He’d seated himself just left of centre in the U-shaped desk arrangement of the room and was leaning back in his chair, watching her.

She answered him, still staring at her screen as she wrestled the system into submission. ‘You know that media idea around creating partial digital ad content by feeding in some of the live stream of online consumer comments? Well, I’ve found an agency that I think can manage it for us – technically and creatively – and also a way of measuring direct return on this spend …’ she trailed off as she looked up to the main screen in the room and her presentation appeared on it.

‘Yes! I win! Sorry,’ she added. ‘This IT stuff is such a mission every time.’

She turned her attention to him properly now and continued. ‘So can I go ahead and brief it in and get a proposal from them?’

‘Sure,’ he said, making a note in his Moleskine. ‘Let me know when you get it and we’ll have a look. You know how sceptical the rest of the brass still are about this integrated AI-type stuff, so ask them whether they have some case studies we can use in the sell too.’

‘Seriously, Jake,’ she said, crossing her legs as she sat back in her chair, ‘why is it that they feel they can criticise every single thing we present when they have no real clue about this stuff? Between them there’s an accountant, a lawyer, a glorified banker turned-Chief Operations Officer, and lots of other acronyms that don’t relate to half a second’s worth of real brand work! Some days I’m really not sure why they employ marketing people at all. They ignore all our recommendations and research and experience anyway.’

Jake hesitated. ‘I guess that’s partly why they hired me – to try to get them up to speed on this stuff.’ He was rolling his silver pen between his outstretched fingers.

‘And they listen to you? Really?’

He sighed. ‘Sometimes,’ he answered quietly. ‘It’s a slow process, but I think they’re starting to get it.’

‘Sure,’ she said, in a drawl that made it clear she wasn’t convinced. ‘Okay, we’ll do the brief and I’ll send it to you for approval before I speak to the agency. Do you want to be in the briefing with them?’

The doors opened and the rest of BrandExco started filing in for their monthly meeting before he could answer, but she knew he would want to be there.