Read an excerpt from Afraid of the Light – the gripping new thriller from Douglas Kennedy, bestselling author of The Pursuit of Happiness and The Moment
More about the book! 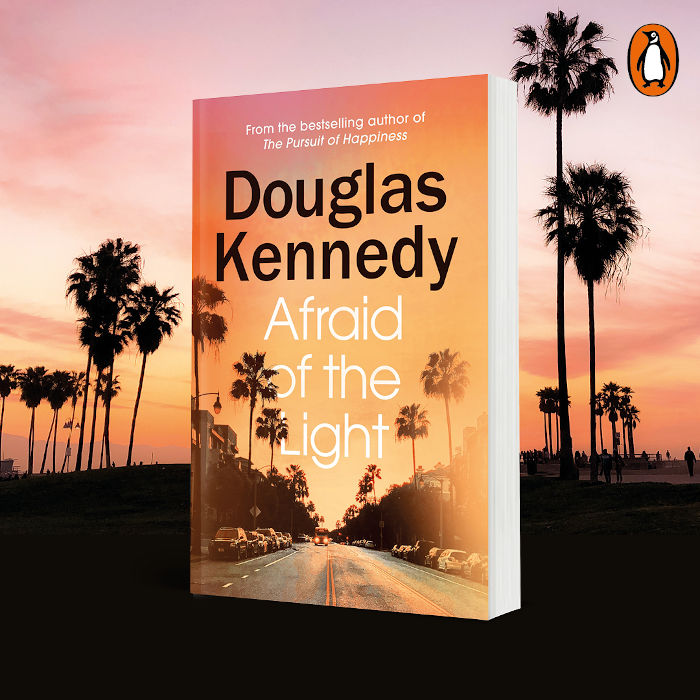 Penguin Random House SA has shared an excerpt from Afraid of the Light by Douglas Kennedy.

A novel of high suspense and considerable moral complexity, Afraid of the Light is a tough, affecting social thriller that speaks volumes about the corrosive divisions of our troubled times. A timely novel to delight old and new fans alike.

Brendan has always lived a careful, constrained life. A salesman who never liked the work, he’s a man who has stayed in his marriage and his faith because it was what was expected of him. But now, having lost his job after corporate downsizing and on the cusp of sixty, he finds himself scrambling to somehow stay afloat in the only Los Angeles work on offer to a man his age – driving for Uber.

When one of his rides, a retired professor named Elise, asks to be dropped off outside an abortion clinic where she now volunteers, Brendan finds himself literally driving right into the virulent epicentre of one of the major issues of our time, engulfing his life in the process.

The voice belonged to my first fare of the afternoon. I’d picked him up at one of those big nothing office buildings on Wilshire, just on the edge of Westwood. A fast ride, two miles, to another faceless office building in Century City. I looked him over in my rearview. The guy was around fifty. Bad tan suit. Bulky – around two sixty and, like me, not happy about all the fleshiness he was carrying around with him. A sweaty guy – and not just because the mercury was punching three figures with killer humidity.

His tone was low-level aggressive, a time-is-money type who believes that the loudest voice in the room wins.

‘We’re going to the address you gave me,’ I said, thinking: one of the rules of this game is that you frequently pick up people who hate the lives they’re living.

‘According to my GPS Wilshire Boulevard was supposed to be clear right up to West Pico,’ I said, wondering if an accident had just leapt into our path. ‘Let me see if the GPS is showing me another way out of this.’

‘Fuck your GPS. Don’t you know the city? Have you never read a fucking map? Or did you just recently show up in this town and land this loser job?’

My instinct was to tell Mr nasty to go have sex with himself. I knew that making such a statement might result in an email against me … and one which could end my only possible source of income right now. So I sucked down my fury and maintained a polite conversational tone. Saying:

‘I was actually born here, sir. A true Angeleno. I’ve spent much of my life stuck in traffic.’

‘But you still steered us into some serious shithole constipation …’

‘– is because you don’t know how to do your job and because, like every loser behind the wheel, you only listen to where your fucking GPS tells you to go.’

Silence. I found myself tensing after that second ‘loser’ slap across the face; his immediate sense of superiority being his way of telling me: I may be nowhere in this world, but I am at least three ladder rungs higher from nowhere than you.

It’s a strategy I use every day – to keep my own quiet rage in check as I do a job that I don’t want to be doing.

But as my career options have flatlined – and the only other work possibilities are minimum-wage nightmares (like stacking shelves at Walmart or doing an eight-hour buried-alive shift in an Amazon warehouse) – sitting behind the wheel of this car still strikes me as less of a mind-fuck option. Even with a guy like this one in the back seat.

‘Now as you will see on the right, sir, the reason we’ve run into such traffic is because that Triumph chopper went under the wheels of that Jeep Cherokee … and the driver of the bike looks kind of dead to me.’

Big Boy looked up from his phone and stared out at the body beneath those Detroit-made wheels. He finally said:

‘He’s not getting to wherever he was going.’

‘So now you’re not just an Uber sad sack, but a philosopher.’

‘What kind of work do you do?’

‘What business is that of yours?’

Silence again. We were crawling by the scene of the crime. Cops everywhere. Two ambulance guys covering the dead biker with a sheet while a third colleague came out with a fold-up metal stretcher. Meanwhile the driver of that new-model Cherokee – I figured him around twenty, all skinny and tanned with Daddy money behind him – had just finished blowing into the breathalyser held for him by a woman cop. The kid looked like he knew that his future was cooked.

Just as I figured.

‘What kind of sales?’

‘You into optical transport? Baseband video?’

‘How do you know that shit?’

‘Ever heard of Auerbach?’

‘They’re our competitors,’ the guy said, aggression gone from his voice. ‘You know them?’

‘That’s fucking weird. ’Cause I cover just about the same territory – only my beat is Nevada, Idaho, Wyoming, Montana.’

‘Yeah, you were chasing the same client base as us.’

‘Twenty-seven years you tell me?’ he asked.

‘A downturn,’ I said. ‘A bad streak. Three big strikeouts.’

‘And they just let you go?’

I glanced in the rearview. Saw the way that his lips were all scrunched up. I wanted to ask: is the reason you play the obnoxious shithead because, like me seventeen months ago, you too are having a losing streak? But I have a ‘never step out of line’ face that I show to the world; a face that parents and priests forced me to wear from a young age. I still wear it for all public transactions. Especially those that take place in my seven-year-old cream-colored Prius. In Uber World once a complaint is made against you then you are in the wrong. Which means: when dark thoughts show up at a moment like this I’ve to keep them locked down inside my throat. Instead saying: ‘Yeah, they just let me go.’

Well, how about that? A moment of shared humanity. A moment that arose not from any kind of actual compassion, but his own fear that he too might end up behind the wheel like me.

The traffic began to move.

‘You gonna get me there on time?’ he asked.

‘According to the GPS … two minutes before your appointment.’

‘You said four minutes before.’

He said nothing during those final minutes in my back seat. When he got out he also said nothing. When I later looked back on my app to see if the guy had tipped me … zilch, zip.

A rule of thumb in my game: