One minute with CA Davids – find out more about her new novel How to be a Revolutionary
More about the book! 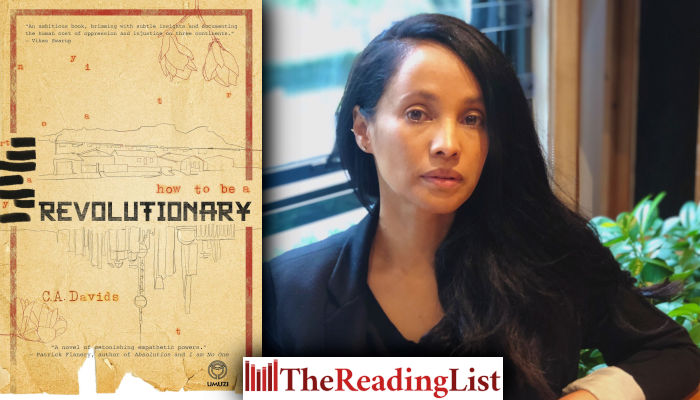 Making up letters and living through revolution, CA Davids’s new novel How to be a Revolutionary will have you ready to discover new countries and cultures.

‘The way Langston Hughes wrote letters to people around the world does feel like an art.’

Your book makes use of letters ostensibly written by Langston Hughes to a South African? Why did you write these and how did you develop the tone in which you wrote the letters?
I created the letters because it helped me to solve two technical issues I was having with my novel. They were a handy device that allowed me to write from Langston Hughes’ perspective in a way that didn’t feel like a biographical telling of Hughes’ time in China; and it allowed for the saying of certain crucial but delicate things. I actually ‘went into character’ with each section of the novel by only writing one character at a time, which helped me to focus on that ‘voice’, and I then wove the novel together at the end.

Have you spent a lot of time in China?
I lived in Shanghai, China for three years. My daughter was only a few months old, so it was a challenging time, but also pretty wonderful. Shanghai is a busy metropolis and living in a massive, packed city has its own beauty and complications.

On letter writing, do you think it really is a lost art, or should we stop yearning for the past and embrace email (or some other form of correspondence)?
The way Langston Hughes wrote letters to people around the world, creating these long-distance friendships and alliances, does feel like an art. But I think we can achieve the same level of engagement today in other ways and I am quite pragmatic, so whatever makes sense in a modern world. And to be honest, I am not sure I would have the patience or the time to write a long form letter.

Your character Beth is going through a very difficult time. How do you keep a character’s difficulties from becoming your own?
I think every writer in some way inhabits some aspects of their characters, often in small ways unless it’s autofiction. But I think I am quite judgmental of the choices Beth made.

A reluctant friendship develops between two people in an apartment block in Shanghai. Each has a secret, a hidden past that must not intrude upon the present.

Beth has been dispatched from Johannesburg to South Africa’s diplomatic mission in this vast Chinese metropolis. Newly divorced, childless, and uneasy about her decision to remain in the employ of a regime she distrusts, she is adrift in her own life.

Until she meets Zhao, her upstairs neighbour. Beth has heard him typing late at night, but Zhao insists she must be mistaken. Zhao – older, unmarried, and a former high-ranking Party journalist – becomes Beth’s friend, the one new friend she has allowed her grown-up self to make.

She is not prepared for a disappearance, followed by the arrival, through her mail slot in the middle of the night, of chunks of typewritten manuscript pages.

Woven into the story are Langston Hughes’s fictional letters to a South African writer about the poet’s own mysterious visit to Shanghai; Zhao’s quest to uncover the truth behind his mother’s disappearance during Communist China’s Great Leap Forward; and the story of Beth, a teenager whose decision to join the South African struggle will have far-reaching consequences for the woman she will become.

How to be a Revolutionary is a bold, daring and poignant exploration of what we owe our countries, ourselves and those we love.

How to be a Revolutionary by CA Davids is out now.