Now available in English! The Krugersdorp Cult Killings: Inside Cecilia Steyn’s Reign of Terror by award-winning journalist Jana Marx
More about the book! 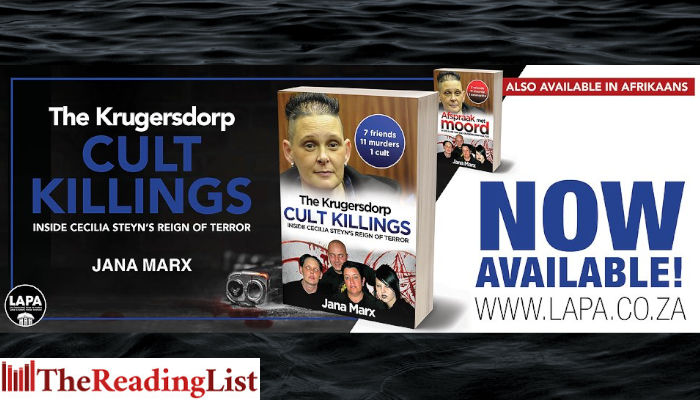 LAPA Publishers is excited to announce that Afspraak met moord by Jana Marx is now available in English as The Krugersdorp Cult Killings: Inside Cecilia Steyn’s Reign of Terror.

Eleven murders over a period of four years sent shockwaves through the Krugersdorp community and made headlines nationwide. Eventually, these murders were connected to Cecilia Steyn and her cult, Electus per Deus (chosen by God). Members of the cult were willing to do anything for Cecilia – even if it meant committing murder.

The murderers are intelligent, ordinary people – a teacher, a financial broker, and a teenager who, despite her involvement in the murders, still managed to obtain six distinctions in matric and be accepted to medical school. Their victims merely kept their appointments, not knowing that their appointments were with death.

Who is Cecilia Steyn? How can one person manipulate five others to commit murder and perjury on her behalf? How did Satanism contribute to all of this? How did inexperienced criminals manage to evade capture for so long?

Jana Marx answers these and other questions in this true-crime account that led to one of the most sensational murder cases in the country’s history. Through interviews with those in the inner circle, evidence given in court and police files covering a period of four years, Marx attempts to answer the public’s questions and provide a view of the inner workings of such a cult.

Afspraak met moord is also available as an audiobook, narrated in Afrikaans by actor Bouwer Bosch.

Friday Night Book Club: Read an excerpt from The Other Bennet Sister by Janice Hadlow – a novel that will delight Pride and Prejudice fans