‘No wallet, no ID, no credit cards.’ Read an excerpt from Johan Vlok Louw’s new novel A Gap in the Hedge
More about the book! 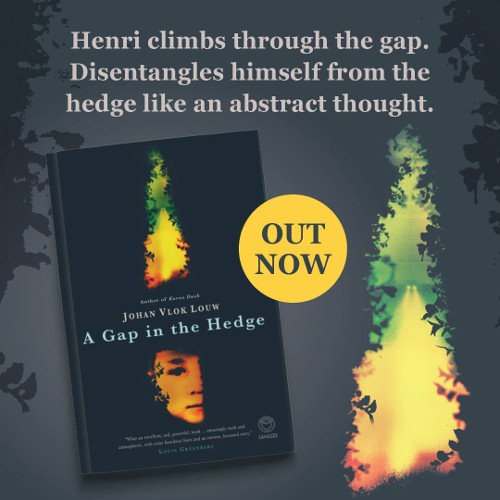 Read an excerpt from A Gap in the Hedge – the new South African novel that everyone is talking about.

A Gap in the Hedge is the third novel from Johan Vlok Louw, the author of Eric the Brave and Karoo Dusk.

Karin Schimke called the book ‘a haunting puzzle of a story rendered in language that is simultaneously blunt and lyrical’, adding ‘I couldn’t read another novel for days after as the last waves of the narrative lapped against my consciousness.’

In a review for The Gremlin, Brian Joss called A Gap in the Hedge ‘a compulsive read’, adding ‘the climax is like finding the final missing piece, that you thought was lost, of a complicated 10 000 piece jigsaw puzzle. It’s a crime story with an unusual twist and a dash of human kindness.’

Read an excerpt from A Gap in the Hedge, shared by Penguin Random House SA:

I reckon it’s very mean to cut a man out of the world and leave only his shadow. What if it gets lonely, misses itself? Because it does, you know?

I knew a snow angel once, and he told me so.

Somewhere in a place beyond sleep, adrift, he was aware of rain drumming on corrugated iron. Only that and a name came to him in his waking moments as drops driven by gusty winds splattered and destroyed themselves to mist against the roof and walls and window panes of the house.

It seeped onto ceilings, then dripped and piddled onto the old wooden floors around him.

He is fully awake now, on his back, under a blanket in the sudden absence of noise. A dark, dead quiet has fallen over the world. The rain has stopped, the wind has died. The moon is a round white stain outside his window.

His body is sore, stiffened by sleep. The thin camping mattress and blanket rolled out onto planks has been too hard, the rest too absolute. A respite, snatched away in a room smelling of old
mould and new wet.

Karl sits listening, head bent. He hugs his knees to his chest and stares absently at peeling wallpaper, then up at the ceiling.

He gets up stiffly, goes over to the door, and tries the handle.

The door is locked, key in it.

In the corridor doors lead to empty rooms. All of this is right here and all of it is touchable. Moonlight sits on walls like pale pictures painted.

Karl exists, he thinks. My shadow over there says that he does. Look, it moves, as I do.

On the front stoep, he stands. It’s all real. The clouds too are passing. Bright stars are visible, a large leafy tree moving in a slight breeze. He sees a hedge with grassland beyond and lights in the distance.

From under the tree he looks back at himself in the dark, turning to go into a house, to lock a bedroom door, to fold a blanket over.

There’s a small bundle of clothes under his head fashioned into a makeshift pillow. It’s quite uncomfortable. Next to the mattress are hiking boots with socks, a packet of Paul Revere, a cheap lighter.

He sits up and leans back, the wall cold against his skin. Karl is a smoker, he decides, and he’s hungry. He reaches over and lights up and sucks in and coughs and blows at the tip and sniffs and puffs.

Then sits inhaling and exhaling easily.

Smoke curls lazily upward. It makes pretty pictures, this, like clouds, he thinks.

Outside the window it is quiet regardless of it being day. (Except for the many birds in that tree.)

Many. Birds. And cicadas. He concentrates and forms the sounds of the word with his lips, mouth. Over-pronouncing, in the quiet, blowing air words. “Ci-ca-das,” he says.

There are damp spots on the floor planks still, but the high ceiling has stopped dripping. Karl gets up reluctantly and pulls on crumpled jeans from the clothes bundle. He unlocks the door again.

In the bathroom he relieves himself, hoping that there’s water in the cistern.

He is in the corridor, standing, peering at overgrown garden-squares set silently in dirty walls. At the front a living room reaches to a semi-enclosed stoep where dust drifts in slabs of sunlight. Three average-sized bedrooms, that bathroom.

A counter with sink is set under a window open to the yard. There are shelves below, and missing and cracked tiles above, and something like melamine on the floor. Bare cement shows through in places. In a plastic bag he finds half a loaf of bread and a tin of bully beef. A can of Coke has been opened, then left next to the bag, as if the drinker was interrupted by something important.

He eats, staring out.

Nothing, nobody. Only the wet, thick hedge, and, to the right, a driveway leading to a gate. A lockup garage to the left. He stands there for some time, staring at its shut roller door while meticulously breaking off pieces of bread and clumps of bully beef, chasing it down with sweet flat Coke.

Afterward, he goes back to the room.

He puts on a shirt and sits down on his makeshift bed to pull on the socks and boots. In the pockets of his leather jacket he searches for something that could waylay, challenge, his new awareness. Karl, he thinks, I am simply Karl.

No wallet, no ID, no credit cards.

A name plucked from the nowhere. We are, he thinks, a spook.

In an inner pocket he finds a keyring with two ordinary padlock keys dangling, and a car key. “And it seems we drive a Ford,” he says.

He stares at it bluntly before going out into the sun.