No Friend but the Mountains by Behrouz Boochani – the international literary sensation written secretly via text message from immigration detention
More about the book! 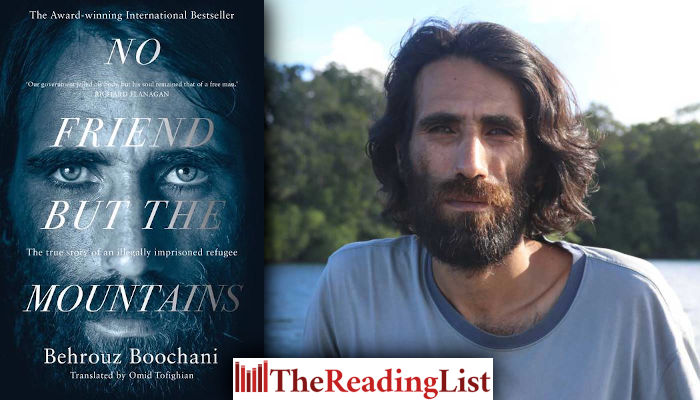 No Friend but the Mountains is an award-winning, devastating true story of survival from illegally imprisoned refugee, Behrouz Boochani.

In 2013, Kurdish journalist Behrouz Boochani sought asylum in Australia, but was instead illegally imprisoned in the country’s most notorious detention centre on Manus Island. He has been there ever since. This book is the result.

Boochani spent nearly five years typing passages of this book one text at a time from a secret mobile phone in prison. Compiled and translated from Farsi, by Omid Tofighian, they form an incredible story of how escaping political persecution in Iran, he ended up trapped as a stateless person.

This vivid, gripping portrait of his years of incarceration and exile shines devastating light on the fates of so many people as borders close around the world.

No Friend but the Mountains is both a brave act of witness and a moving testament to the humanity of all people, in the most extreme of circumstances.

In January 2019 the book won Australia’s most valuable literary prize, the Victoria Premier’s Prize for Literature, drawing attention not just to Boochani’s work but to the plight of refugees on Manus Island and around the world.

Boochani was unable to collect his prize in person due to his detention, but recorded a moving and passionate acceptance speech.

In his speech, Boochani said:

‘I have been in a cage for years but throughout this time my mind has always been producing words, and these words have taken me across borders, taken me overseas and to unknown places. I truly believe words are more powerful than the fences of this place, this prison.’

‘This is a brilliant book. No Friend but the Mountains is a book that can rightly take its place on the shelf of world prison literature, alongside such diverse works as Oscar Wilde’s De Profundis, Antonio Gramsci’s Prison Notebooks, Ray Parkin’s Into The Smother, Wole Soyinka’s The Man Died, and Martin Luther King Jr’s Letter from Birmingham Jail … It is a profound victory for a young poet who showed us all how much words can still matter.’