New updated edition of Pieter du Toit’s bestselling book The Stellenbosch Mafia: Inside the Billionaires’ Club
More about the book! 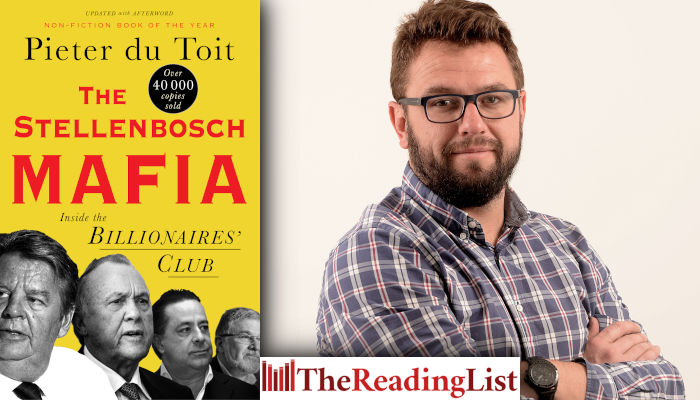 With over 40 000 copies sold of the first edition, Jonathan Ball Publishers is proud to announce the release of the updated version of The Stellenbosch Mafia: Inside the Billionaires’ Club by Pieter du Toit!

The new edition contains a new chapter with more detail about Johann Rupert’s disdain for Markus Jooste and Steinhoff, and includes a rebuttal by Christo Wiese to Rupert’s statements about his private financial affairs.

Rupert also elaborates on his relationship with Nelson Mandela and FW de Klerk, and intimates De Klerk was ‘lazy’ in not keeping a closer eye on the negotiations.

The beautiful town of Stellenbosch, nestled against vineyards and blue mountains that stretch to the sky, lies a short drive from Cape Town. Here some of South Africa’s wealthiest individuals live: all male, most Afrikaans – and all fabulously wealthy.

Julius Malema refers to them scathingly as the ‘Stellenbosch Mafia’, the very worst example of white monopoly capital, while their critics rail about their influence over the state and the economy. But who are these rich individuals, and what influence do they wield?

Journalist Pieter du Toit explores the roots of Stellenbosch, one of the wealthiest towns in South Africa and arguably the cradle of Afrikanerdom. This is the birthplace of apartheid leaders, intellectuals, newspaper empires and more.

He also closely examines this ‘club’ of billionaires. Who are they and, crucially, how are they connected? What network of boardroom membership, alliances and family connections exist? Who are the ‘old guard’ and who are the ‘inkommers’?

The Stellenbosch Mafia is the first attempt not only to investigate if this group officially exists, but also to determine whether the town has an outsized influence on South African business and society.

Pieter du Toit, who was a Stellenbosch ‘inkommer’ during high school, is an award-winning journalist and assistant editor at News24. He has written about politics for a decade and a half and is the co-author of Enemy of the People (Jonathan Ball, 2017). He is a former editor of HuffPost South Africa and news editor of Beeld and Netwerk24.