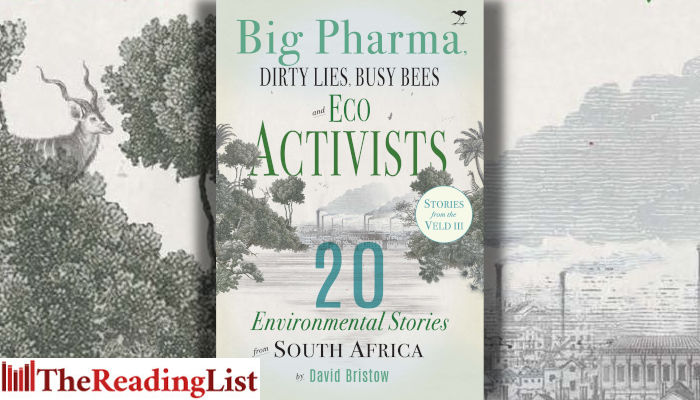 Find out what industrially manufactured foods and large-scale farming are doing to us; how state capture has derailed our civil service and triggered sewerage spills, oil slicks and air pollution; who benefits most from health supplements; and what are the real costs of generating power and what works best – coal, nuclear, fracking, solar or wind.

You will also read about the good deeds of our eco heroes: those who bring water and hope to stricken towns; who farm regeneratively and sell us wholesome foods; who clean up other people’s messes; as well as individual superheroes who nurture their own back gardens. This book celebrates some of them.

Written in the same engaging style as his previous two books in the series Stories from the Veld (The Game Ranger, the Knife, the Lion and the Sheep and Of Hominins, Hunter-Gatherers and Heroes), this book is a journey into unravelling the environmental landscape of South Africa. And then comes the hardest questions: are you going to contribute to a green future or a brown past?

David Bristow cannot recall exactly when he became ozone friendly. What he does recall contemplating things like energy efficiency long before he learned anything about Watts and Amps.

School protests in 1976 lit a spark and the next year saw him studying how to be a muckraking journalist. There the author started spending weekends rock climbing, with people who seemed to know an awful lot about stuff like plants and rocks and ecosystems. This so impressed him that he went on to study earth sciences.

More than four decades and some 20 books later, he has been fortunate to realise a long-time dream – becoming a paperback writer. Big Pharma, Dirty Lies, Busy Bees and Eco Activists is his third book in the popular Stories from the Veld series, following The Game Ranger, the Knife, the Lion and the Sheep: 20 tales about curious characters from Southern Africa and Of Hominins, Hunter-Gatherers and Heroes: Searching for 20 Amazing Places in South Africa.