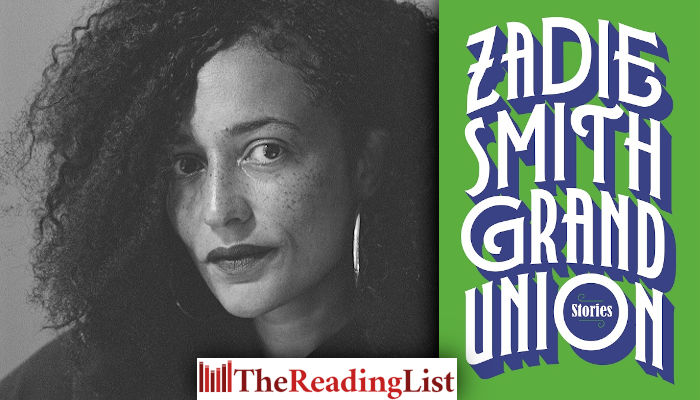 Grand Union: Stories by Zadie Smith will be published in October 2019 by Penguin Random House.

This is the first-ever collection of stories from the Man Booker Prize-shortlisted author of Swing Time and White Teeth.

Smith has established herself as one of the most iconic, critically respected, and popular writers of her generation. In her first short story collection, she combines her power of observation and her inimitable voice to mine the fraught and complex experience of life in the modern world.

Interleaving 11 completely new and unpublished stories with some of Smith’s best-loved pieces from the New Yorker and elsewhere, Grand Union is a dizzyingly rich and varied collection of fiction.

Moving exhilaratingly across genres and perspectives, from the historic to the vividly current to the slyly dystopian, Grand Union is a sharply alert and prescient collection about time and place, identity and rebirth, the persistent legacies that haunt our present selves and the uncanny futures that rush up to meet us.

Nothing is off limits, and everything – when captured by Smith’s brilliant gaze – feels fresh and relevant. Perfectly paced and utterly original, Grand Union highlights the wonders Zadie Smith can do.

‘Zadie Smith is the best writer of our generation.’ – Gary Shteyngart

‘Her dialogue is pitch-perfect, her comic timing masterful … [And] she also delivers a sophisticated commentary on race, gender, class, celebrity and power.’ – Telegraph on Swing Time

‘Smith is virtuosic, as ever, on family and friendship, and her ability to write about large-scale social injustice without losing her neutral novelist’s gaze is breathtaking.’ – Times Literary Supplement on Swing Time

In the summer of 1959, an Antiguan immigrant in north west London lives the last day of his life, unknowingly caught in someone else’s story of hate and division, resistance and revolt.

A mother looks back on her early forays into matters of the human heart – and other parts of the human body – considering the ways in which desire is always an act of negotiation, destruction, and self-invention.

A disgraced cop stands amid the broken shards of his life, unable to move forward into a future that holds no place for him.

Moral panic spreads like contagion through the upper echelons of New York City – and the cancelled people look disconcertingly like the rest of us.

A teenage scion of the technocratic elite chases spectres through a premium virtual reality, trailed by a little girl with a runny nose and no surviving family.

We all take a much-needed break from this mess, on a package holiday where the pool’s electric blue is ceaselessly replenished, while political and environmental collapse happen far away, to someone else.

Zadie Smith is the author of the novels White Teeth, The Autograph Man, On Beauty, NW and Swing Time, as well as two collections of essays, Changing My Mind and Feel Free. Zadie was elected a fellow of the Royal Society of Literature in 2002, and was listed as one of Granta’s 20 Best Young British Novelists in 2003 and again in 2013. White Teeth won multiple literary awards including the James Tait Black Memorial Prize, the Whitbread First Novel Award and the Guardian First Book Award. On Beauty was shortlisted for the Man Booker Prize and won the Orange Prize for Fiction, and NW was shortlisted for the Baileys Women’s Prize for Fiction. Zadie Smith is currently a tenured professor of fiction at New York University and a Member of the American Academy of Arts and Letters.