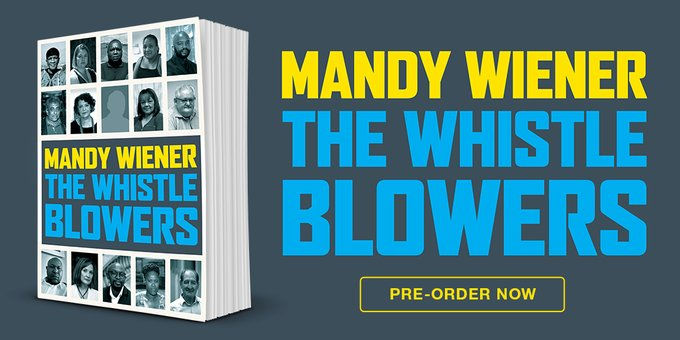 Pan Macmillan is proud to be publishing The Whistleblowers, the fifth book by bestselling author Mandy Wiener!

The book shines a light on the plight of whistleblowers advocating for a change in legislation, organisational support and social attitudes. Out in September!

With corruption and fraud endemic in democratic South Africa, whistleblowers have played a pivotal role in bringing wrongdoing to light. They have provided an invaluable service to society through disclosures about cover-ups, malfeasance and wrongdoing. Some would argue it was whistleblowing that brought down a president and the corrupt ‘state capture’ regime.

In most cases, the outcomes for the whistleblowers themselves are harrowing and devastating. Some have been gunned down in orchestrated assassinations, others have been threatened and targeted in sinister dirty-tricks campaigns. Many are hounded out of their jobs, ostracised and victimised. They struggle to find employment and are pushed to the fringes of society.

The psychological burden of choosing to speak up when there has been little reward or compensation is a heavy one to carry. The Whistleblowers shines a light on their plight, advocating for a change in legislation, organisational support and social attitudes in order to embolden more potential whistleblowers to have the courage to step up.

Their status as whistleblowers is sometimes contentious – this book delves into whether they deserve the status or whether they were, in fact, complicit in the wrongdoing they claimed to expose. These are the raw and evocative accounts of South Africa’s whistleblowers, told in their own voices and from their own perspectives.

Mandy Wiener is one of South Africa’s best-known and most credible journalists and authors. She has worked as a multi-award-winning reporter since 2004.