New book alert! Concrete Rose by Angie Thomas, author of bestselling The Hate U Give (PLUS Free Teacher’s Notes and Discussion Guide)
More about the book! 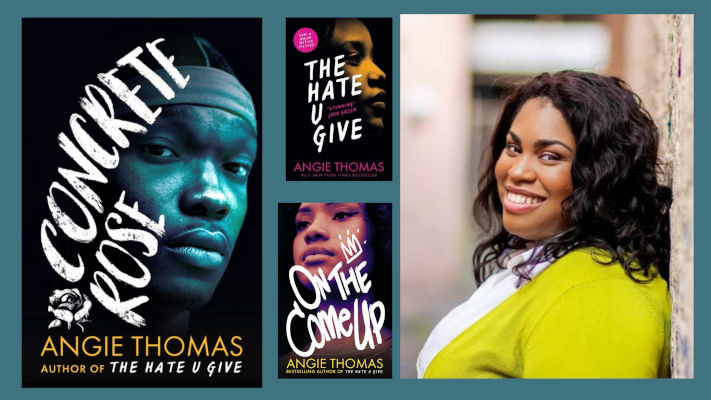 Concrete Rose by Angie Thomas is out now from Pan Macmillan!

The publisher has also shared some Teacher’s Notes and a Discussion Guide, available to download here.

From the international phenomenon Angie Thomas comes a hard-hitting return to Garden Heights with the story of Maverick Carter, Starr’s father, set seventeen years before the events of the award-winning The Hate U Give.

The son of a drug king, seventeen-year-old Maverick Carter is negotiating life in Garden Heights as he balances school, slinging dope, and working two jobs while his dad is in prison. He’s got it all under control – until, that is, Mav finds out he’s a father.

Suddenly he has a baby, Seven, who depends on him for everything. Loyalty, revenge and responsibility threaten to tear Mav apart, especially after the brutal murder of a loved one.

So when Mav is offered the chance to go straight, it’s an opportunity – in a world where he’s expected to amount to nothing – to prove he’s different and figure out for himself what it really means to be a man.

‘A blistering, unputdownable look at black boyhood in the US, and what it means to be a man. It can be read as a standalone, but knowledge of The Hate U Give will make for a richer reading experience.’ – The Bookseller

‘Thomas proves Game of Thrones-esque in her worldbuilding ability, deepening her landscape without sacrificing intimacy or heart. Garden Heights doesn’t contain dragons or sorcerers, but it’s nevertheless a kingdom under siege, and the contemporary pressures its royalty faces are graver for the realness that no magic spell can alleviate … A resounding success.’ – Kirkus, starred review

‘Exploring the world of the Carters in the late 90s, it’s a tale of evolution set against a world of race, drugs and redemption and one that underlines Thomas’ ability to unflinchingly reflect the truth of race, politics and family in the US.’ – Stylist

Read ‘Christmas 1965’, an excerpt from Imprisoned: The Experience of a Prisoner Under Apartheid

Don’t miss the launch of Charles Abrahams’s new book Class Action: In Search of a Larger Life at The Book Lounge (13 Feb)