New book alert! A Registry of My Passage Upon the Earth by Daniel Mason, the bestselling author of The Piano Tuner
More about the book! 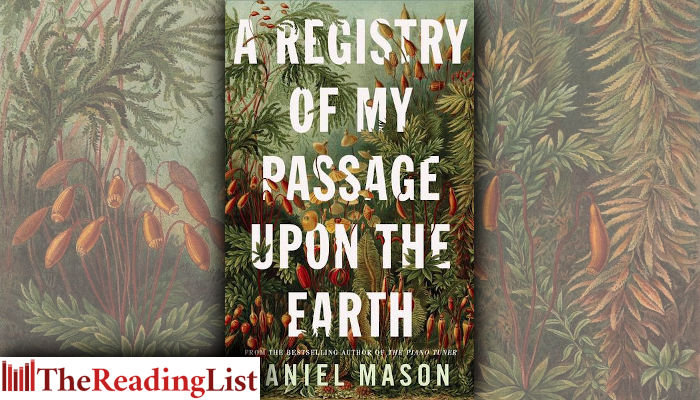 A Registry of My Passage Upon the Earth – from the bestselling, award-winning author of The Winter Soldier and The Piano Tuner comes a collection of interlacing tales of men and women as they face the mysteries and magic of the world.

‘One of the finest prose stylists in American fiction.’ – New York Times

On a fated flight, a balloonist makes a discovery that changes her life forever. A telegraph operator finds an unexpected companion in the middle of the Amazon. A doctor is beset by seizures, in which he is possessed by a second, perhaps better, version of himself. And in Regency London, a bare-knuckle fighter prepares to face his most fearsome opponent, while a young mother seeks a miraculous cure for her ailing son.

At times funny and irreverent, always moving, these stories cap a 15-year project that has won both a National Magazine Award and Pushcart Prize. From the Nile’s depths to the highest reaches of the atmosphere, from volcano-wracked islands to an asylum on the outskirts of Rio de Janeiro, these are lives of ecstasy and epiphany.

Daniel Mason is a physician and author of The Piano Tuner (2002), A Far Country (2007), The Winter Soldier ​(2018) and A Registry of My Passage Upon the Earth (2020). His work has been translated into 28 languages, awarded the Joyce Carol Oates Prize and the Northern California Book Award for Fiction, and shortlisted for the James Tait Black Memorial Prize. The Piano Tuner was produced as an opera by Music Theatre Wales, and adapted to the stage by Lifeline Theatre. His short stories and essays have appeared in ​The Atlantic, Harper’s, Zoetrope: All Story and Lapham’s Quarterly; in 2014 he was a recipient of a fellowship from the National Endowment for the Arts. A Clinical Assistant Professor in the Stanford University Department of Psychiatry, his research and teaching interests include the subjective experience of mental illness and the influence of literature, history and culture on the practice of medicine.