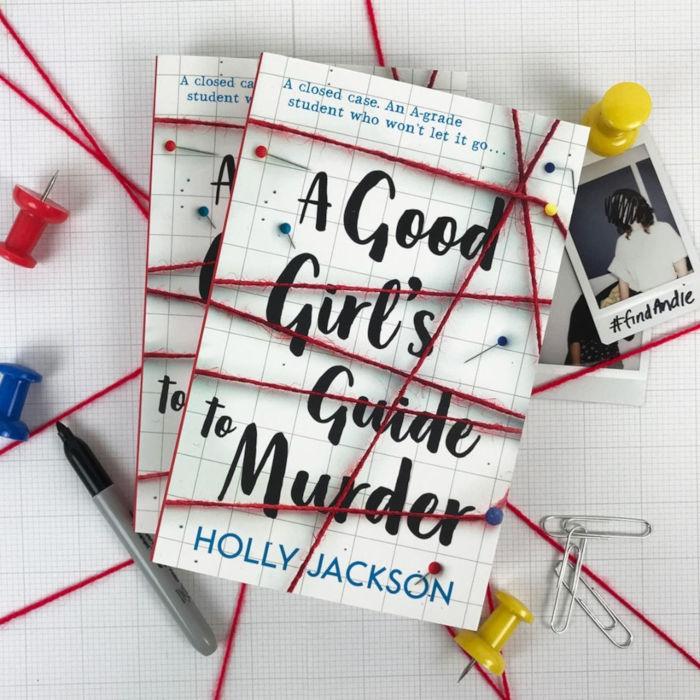 Secrets, conspiracies and ALL the red string have led us to this point: the murder mystery that everyone is talking about is finally here …

Grab A Good Girl’s Guide to Murder by Holly Jackson and solve the riddle this weekend!

A Good Girl’s Guide to Murder is a debut Young Adult crime thriller with shades of Serial and Making a Murderer.

The book is the highest charting and bestselling YA debut of 2019, and television and film rights have already been snapped by Moonage Pictures, the team behind hits such as Peaky Blinders.

‘Dark, dangerous and intricately plotted – my heart literally pounded. I haven’t been this addicted to anything since Serial. Holly Jackson is the next big thing, I promise’ – Laura Steven, author of The Exact Opposite of Okay

The case is closed. Five years ago, schoolgirl Andie Bell was murdered by Sal Singh. The police know he did it. Everyone in town knows he did it.

But having grown up in the same small town that was consumed by the crime, Pippa Fitz-Amobi isn’t so sure. When she chooses the case as the topic for her final project, she starts to uncover secrets that someone in town desperately wants to stay hidden. And if the real killer is still out there, how far will they go to keep Pip from the truth?

Holly Jackson started writing stories at a young age, completing her first (poor) attempt at a novel when she was fifteen. She graduated from the University of Nottingham, where she studied literary linguistics and creative writing, with a master’s degree in English. She enjoys playing video games and watching true-crime documentaries so she can pretend to be a detective. She lives in London. A Good Girl’s Guide to Murder is her debut novel.

Two brothers. One town. A lifetime of dark secrets. Find out more about Jo Nesbo’s new standalone thriller The Kingdom