Marguerite Poland’s new novel A Sin of Omission inspires Keiskamma artists to create a series of tapestries
More about the book!

The four tapestries depict key events in the life of Reverend Stephen Mzamane, the main character in the novel, which is based on a true story.

A young Xhosa man, Stephen was trained at the Missionary College in Canterbury, England, before returning to South Africa, where he struggled to find acceptance among his own people and encountered discrimination from within the Church.

The women, members of the Keiskamma Trust, centred in Hamburg in the rural Eastern Cape, chose key events in Stephen’s life to illustrate in thread.

‘Finding Stephen’ depicts the devastation of the Cattle Killing of 1856 and 1857, and shows a missionary finding the starving nine-year-old Stephen. ‘The boy was grey-tinged, a husk-child, motionless in the shadow of a bush.’

Poland’s involvement with the Trust began when she acted as consultant on one of its best-known and largest works to date, the Keiskamma Tapestry. The tapestry, which is 112 metres in length, shows the history of the Eastern Cape and begins with its earliest inhabitants, the San, the Khoi and the Xhosa.

It then shows the arrival of the settlers and their interactions during the frontier wars, and moves through the 19th and 20th centuries, dealing with apartheid and ending with the first democratic elections in 1994.* Poland, who co-authored the book The Abundant Herds: A Celebration of the Nguni Cattle of the Zulu People, assisted the Trust with design issues pertaining to the cattle depicted in the tapestry. 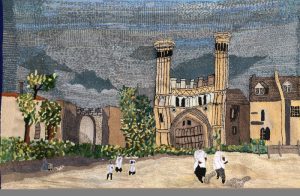 ‘Canterbury’ shows the Missionary College in Canterbury where Stephen was later sent to prepare for the priesthood and where he forged a close friendship with an English student.

According to Dr Carol Baker Hofmeyr, the founder of the Keiskamma Trust, the artists who worked on the series inspired by A Sin of Omission chose scenes which seemed central to Stephen’s life. They visited Nondyola, the missionary station to which Stephen was sent on his return from Canterbury, and the site of the Anglican Institution in Grahamstown, in order to understand more fully who Stephen was.

They were extremely moved by the story as they related to Stephen’s isolation and the conflict and pain he had experienced. 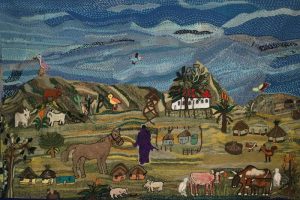 In ‘Stephen arriving at Nondyola’, Stephen sees for the first time the isolated little church that is to become his parish.

The fourth tapestry in the series is a record of the women’s visit to Nondyola in August 2019, and shows them dancing around the maypole in front of the church with the Nondyola Women’s Union. A testament to Stephen’s work, the small church in which he preached is still active. 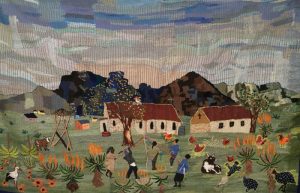 ‘The Maypole Dance’ shows the church as the Keiskamma artists saw it when they visited in 2019 and were taught a maypole dance by Lindi Petros, chairperson of the Women’s Union.

Each piece in the series was made by two designers and two embroiderers, with artist Cebo Mvubu overseeing all the work. A total of 17 Keiskamma Trust members were therefore involved in creating the four tapestries.

For Marguerite Poland, the project is proof of the creative spirit of a rural community faced with daily hardships. ‘The work is wonderful not only for its artistry but because it honours its cultural heart with such truth and pride,’ she says.

The embroidered works will be exhibited at St Andrew’s College, Grahamstown, on 23 November 2019 and are for sale at R10,000 each. The proceeds will go to the Keiskamma Trust.

Each tapestry measures 1 x 1.5 metres. Further tapestries, also inspired by scenes from A Sin of Omission, will be available on request. Contact Carol Baker Hofmeyr on 083 379 8396 or carol@keiskamma.org for more information.

*The Keiskamma Tapestry was purchased by Standard Bank, who has lent it to Parliament for an extended period.

Based on a true story, A Sin of Omission opens with Stephen (Malusi) Mzamane, a young Anglican priest, journeying to his mother’s rural home to inform her of his elder brother’s death.

The book will be launched in October 2019.