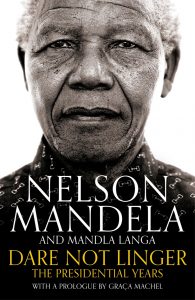 Dare Not Linger, the sequel to Nelson Mandela’s Long Walk to Freedom, is out from Pan Macmillan South Africa in October.

Dare Not Linger is the story of Mandela’s presidential years, drawing heavily on the memoir he began to write as he prepared to finish his term of office but was unable to finish.

‘It was a very difficult process for Madiba, he didn’t quite embrace technology,’ La Grange explains. ‘Because he was removed from society for such a long time he didn’t develop as fast as technology did, so it was very foreign to him.’

La Grange says she suggested Mandela dictate the book to her or onto a recorder, but he refused.

‘I think he felt he did a better job writing it longhand,’ she says.