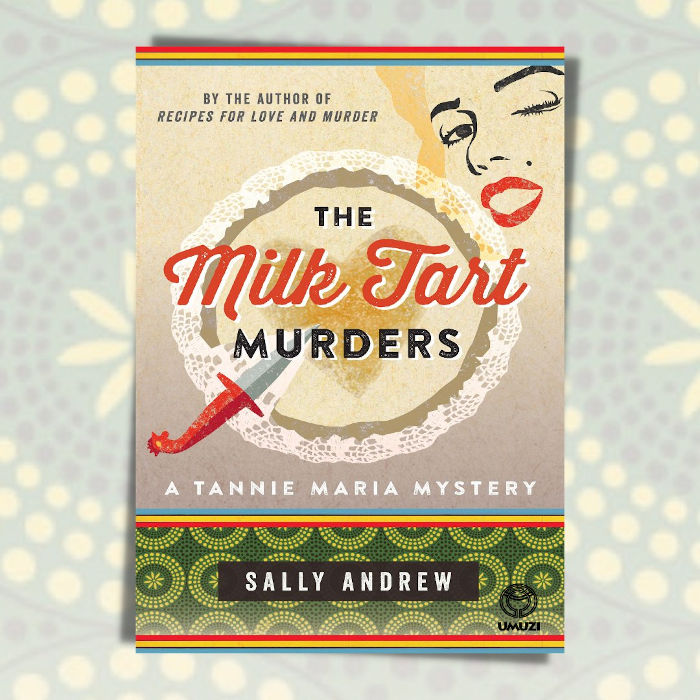 The fourth instalment in the Tannie Maria crime series is a delicious follow-up to the bestselling Recipes for Love and Murder, Tannie Maria and the Satanic Mechanic and Death on the Limpopo.

When Oom Frik dies during a vintage movie screening in Ladismith, Tannie Maria and her policeman boyfriend Henk are on the scene.

When a second body turns up, there’s a clue: a letter addressed to Tannie Maria asking for advice – and a milk tart recipe.

Fifty-plus agony aunt Maria and feisty young journalist Jessie conduct their own treasure hunt and murder investigation. The police are looking for the perpetrator too, but the amateur detectives have unique skills, and Tannie Maria’s food is a powerful incentive to get people to talk.

I woke to the sound of swallow chirrups. Every spring they fly across Africa, down to the Klein Karoo. They already had one nest on my stoep, and now they’d built another outside my bedroom window. Made of mud, like my house.

Henk grunted and rolled over, his arm falling across my chest. I was wearing my cotton nightie and he was naked. I smiled at this big sleeping man with his chestnut moustache and strong arms.

My smile woke him. He propped himself up on an elbow.

My late husband, Fanie, had put me off marriage for life.

‘But maybe we could live together,’ I said, stroking the silver and copper hairs on his chest. ‘You could move in here?’

Henk turned onto his back, put his hands behind his head and looked up at the Oregon ceiling.

‘Maybe we should just leave things like they are,’ he said.

Shadows fluttered across my sash window. Swallows, leaving the nest.

‘Is this about Norma?’ I asked. ‘All her stuff in your house?’

Norma was Henk’s late wife. She had died a few years ago, but his home was still full of her furniture and photographs. And recipe books.

‘We could go to a movie together,’ he said. ‘This afternoon.’

‘But it’s Saturday. You watch rugby with Reghardt.’

‘Okay,’ I said. ‘But first you can help me bake a lemon drizzle cake.’

Henk pulled on his long-sleeved white shirt and blue jeans. I put on a green cotton blouse, long dark pants and khaki veldskoene. I brushed my hair, tidying up the short brown curls. Then I let my five hens out of their hok. They squawked and fluffed their rust-red feathers. I checked the ground for rooikat prints and the sky for hawks, but it all looked safe. For now. I threw the chickens a handful of crushed mielies. They gobbled this up then moved across to see what today’s special was at the breakfast buffet – the compost heap.

Henk and I sat on the stoep and dipped rusks into our coffee and listened to the morning choir of birds. Swallow chicks were twittering softly in the nest above our heads. The sun lit up my garden and the veld with its thorn trees and my old friend, the ancient gwarrie tree, its canopy dark green.

Beyond the veld is the Rooiberg and then the distant Langeberge. The Swartberge are behind the house, to the north. I felt grateful to all these mountains. For being there my whole life long. Other things change. People come and go. Even the trees change shape and colour. But the mountains are just there. Sun and rain and wind move across their surfaces. Light and shadows. But you can rely on them not to go anywhere.

I looked across at Henk, who was also enjoying the view. We had been together nine months now. Sometimes it felt like he was as solid as a mountain. I was pretty solid too, but smaller, softer and rounder.

The chickens joined a pair of robins scratching for insects in my veggie patch. A bokmakierie was on a branch of the lemon tree, singing one of its hit singles like its heart was about to burst. The weavers in the eucalyptus trees by my dirt driveway were making a racket like a teenage disco party. Mating season makes all the birds a little crazy.

I reached for Henk’s hand. Our fingers wove together to make a nest. A warm, safe space that we had built.

Baking with Henk is always slower than baking on my own, but it’s more fun. We put the cake in the oven, and Henk cleaned up while I did some work.

I write ‘Tannie Maria’s Love Advice and Recipe Column’ for the Klein Karoo Gazette. People write to me with their love problems and I give them a little advice, and a recipe that I hope will help. Weekday mornings I’m at the Gazette office and I sometimes catch up with my letters on Saturdays.

I sat at my small phone table with an email my editor, Hattie, had printed out for me, and a pen and paper. I had a laptop, but it lived at the Gazette. So Henk and I were both in the open-plan room that holds my kitchen, Aga stove and lounge. The kitchen door is my front door and opens out onto my stoep and garden.

There’s this guy at my office. I like him a lot and he might like me too, but I can’t be sure. He’s very shy and so am I. What can I bring to work – without making a fuss – that will get his attention? I know he has a sweet tooth.

Here’s a recipe for creamy fudge. It looks very simple, but when he tastes it, he will close his eyes and something inside him will melt. Offer everyone a piece, but make sure you’re standing next to him when he eats his. After he has opened his eyes, you will see by the way he looks at you if he feels the same way about you as he does about the fudge.

Have a small packet of the fudge ready, with a ribbon on it. If he gives you the right look, you can hand it to him. That will show him how you feel. Don’t put more than four pieces in the packet because it’s good to leave him wanting more.

I wrote out the fudge recipe.

‘The cake is waiting,’ said Henk. He winked at me and I joined him in the kitchen.

Henk poked holes in the cake with a skewer, and I drizzled on the lemon syrup. Somehow, I got syrup on his elbow and the tip of my nose.

Lemon syrup, cake and coffee made a perfect three-course breakfast.