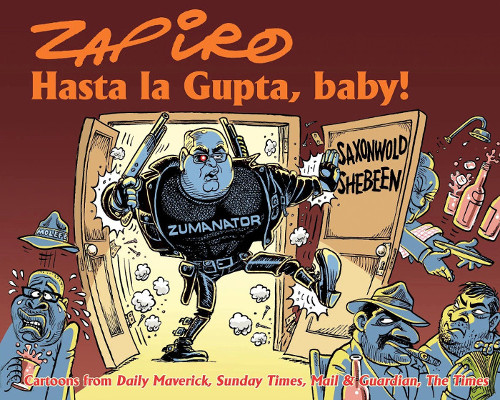 Jacana Media are thrilled to invite you to the Johannesburg launch of Zapiro’s new book Hasta la Gupta, Baby!

The event will take place on 24 November at 14:00 at the Wits Education Campus.

No little thorn in the flesh or irritating fly in the ointment, Zapiro just cannot be ignored.

It’s been one helluva year. We’ve held our breath thinking Zuma may resign. We’ve seen Juju re-booted and Zille tweeted out. Racial tensions rise, tempers and fires flare. Still the rich get richer and the poor get Khayelitsha. We’ve seen Trump’s megalomania, Bell Pottinger‘s spin and Pravin’s fightback, cadres captured and Cabinet’s relocation to Saxonwold Shebeen. GuptaLeaks threaten to drown us and as the flood rises the rodents scatter.

And who better to make sense of this than Zapiro, political analyst, cartoonist and agent provocateur. He has the ability
to knock the air out of us, to rock us back in our seats, to force us bolt upright with a 1000-watt jolt of electrifying shock.
He makes us angry, he makes us laugh and he makes us think. He shines a light on the elephant in the room, presents the emperor in all his naked glory. Impossible to brush off, he is
determined to provoke a response.

When all around is crumbling, when fake news and zipped lips conceal the truth, Zapiro comes to the rescue. With the dissecting eye of a surgeon, the rapier-like point of his pen exposes flimflam, and reveals with a line what lies behind the action.