In trying to deal with the end of an abusive 45-year marriage, Grietjie turns to crochet: Read an extract from Crochet and Conquer
More about the book! 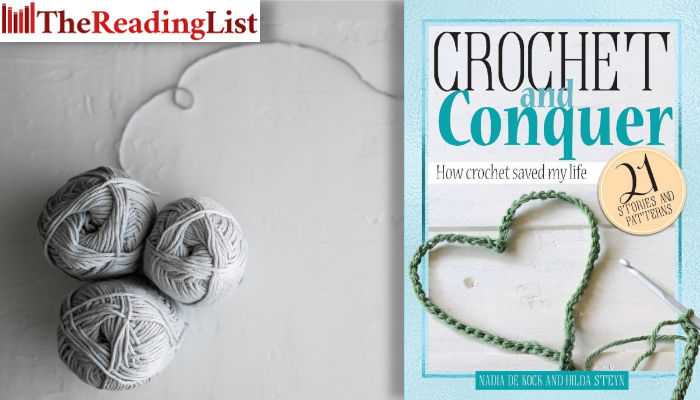 Each poignant personal account is accompanied by its own matching motif and project.

In this book, 21 brave women open their hearts and tell their stories of battle and eventual victory. LAPA has shared an excerpt where a woman shares her story of how crochet helped her survive an abusive marriage.

While trying to deal with the end of an abusive 45-year marriage,
Grietjie turns to crochet.

‘I met him at a Christian student conference. My roommate introduced us.’

Grietjie* is a slender woman with short hair and a broad smile. She speaks about her great love, her ex-husband.

‘It was so romantic. I accompanied Gerhard* to his farewell ball at the University of the Free State and shortly thereafter, in December, we were a couple. He then went off to Durban for a six-month course and we saw each other only once during this time.

‘After completing his course, Gerhard went back to his family farm, Jongenfontein. I was in my third year of studying to be a teacher. We saw each other every six weeks or so. He could not attend my last year-end ball because he was too busy on the farm.

‘I got a teaching job at a girls’ school in a relatively large Western Cape town and stayed in a hostel. Gerhard and I didn’t get to see much of each other during this time. We got engaged in September that year and planned to get married the following March. During this time, we were invited to my best friend’s wedding and, for the first time in my life, I had to play the organ in front of an audience. On the Friday before the wedding, I got a call from Gerhard. He could no longer attend the wedding because the sheep shearers had arrived and he was needed on the farm. I was devastated. I went home and I remember by dad’s words to this day: “Taking off an engagement ring is easier than taking off a wedding ring.” Regardless, that December I made myself a wedding dress.

‘The following year I took a post at a primary school in another town, closer to Gerhard’s family farm, and rented a room from an old lady. Gerhard and I then rented a railway house and painted it on Saturdays. Finally, our wedding day arrived. The day was wonderful, a bride’s dream come true, but my mother-in-law cried throughout the whole thing. She isn’t smiling in a single picture.

‘We went to the seaside for our honeymoon, but it was cut short after two days. Gerhard’s dad called. It had rained on the farm and Gerhard had to go back to plough. After being married for six weeks, Gerhard was called up for three months’ military service on the border. After his return, I fell pregnant almost immediately and had to quit teaching.’

Grietjie hesitates for a moment.

‘I should have known something was seriously wrong with our relationship before we got married. But you don’t always notice these things.

‘In retrospect, there was no loyalty, no love and no respect.

‘A short while later, we bought a farm about 20 kilometres from the family farm. The farmstead was a mess; my sister and sister-in-law helped to clean it out. I was heavily pregnant and uncomfortable. We filled holes in the walls with toothpaste because money was scarce. Whenever the wind picked up, the paint would fall to the floor from the ceilings.

‘We moved to the farm in March. Gerhard literally only slept there. Every day, he would drive out to the family farm. If he wasn’t there every morning at five o’clock, his dad would call. Our first child was born then.

‘Gerhard would often talk about what a good team we were. His sister gave up her university studies and spent a lot of time with us. He saw a gap and brought her in to babysit to free me up to help him with farm work. I had to run after sheep until my lungs felt like they were burning up, and would load hay onto the open tractor in the scorching heat. Come bedtime, I would be exhausted … but then Gerhard would want sex. I pleaded with him that I just wanted to get some sleep, but he would get what he wanted time after time.

‘I fell pregnant for the second time and I realised that my life was turning into a nightmare. My eldest wasn’t sleeping well because of colic. Gerhard slept through all of it. A few weeks before the birth of my second child, I asked him to help out with the colicky baby. He responded by smacking him.

‘My second child was born and, in the meantime, my sister-in-law had found work. With two babies in the house and no help, I could no longer work outside. Then Gerhard’s criticism began in earnest: how badly I ran the household, how tasteless my food was, how I could only fix eggs on toast for dinner. “What do you do all day?” I was asked regularly.

‘To the outside world, we looked like a happy couple. In front of other people, he acted affectionately towards me. It made me hope that things would improve because he could be loving at times. But at home, it was a different story altogether. I learnt to build walls around me to absorb all the insults. I got very lonely between these walls of mine on that farm.

‘Then I fell pregnant again. How stupid can one be? While I was pregnant, harvest time arrived and I had to take meals to the fields. My husband and father-in-law expected lunch to be served at twelve o’clock, on the dot. One day, I arrived 10 minutes late and had to endure my father-in-law’s wrath. He really let me have it. And Gerhard, my husband who should be there for me, didn’t open his mouth. When I spoke to him about it that night, he just said that I should have stood up for myself.

‘Two months later, I was lying on the maternity bed and it felt like the pain was tearing my body apart. “It’s what you deserve for the unpleasantness during the harvest.” I gritted my teeth, but the realisation that my husband was not really there for me made me feel like I wanted to cry and never stop.

‘I had two toddlers and a baby to think about. Where was I going to go with them? I felt lost and alone on earth. At that point, I had no friends I could visit because “petrol is too expensive”. So, I just went back home and kept my mouth shut. But Gerhard’s harsh words in the delivery room had left deep, raw wounds within me. His verbal abuse became even worse after that and sometimes I was afraid he would physically assault me. He also knew exactly what would hurt me most; there were always comments about how badly I performed in bed, how “cold” I was.

‘He then started playing rugby for the town’s team. After matches, the men would go out drinking and I started to worry about the level of his alcohol abuse. As always, I was being “ridiculous” and didn’t know what I was talking about. I still hear his words: I’m prudish, narrow-minded and Victorian.

‘During this cold period, I took up sewing. I made the children’s clothes myself and knitted jerseys for them. I also start crocheting – my grandmother had taught me to crochet when I was in primary school. It soothes my mind when someone compliments me on my beautiful handiwork.

‘I also did a machine embroidery course and made a throw for our bed. Gerhard walked past and asked, “And where are you going to put this thing? Hopefully not in our bedroom.” Condescending and degrading. That throw is still stuffed in the closet.

‘One day, I saw on Facebook that a woman, Hilda Steyn, wanted to make a heritage blanket and was inviting people to join in with projects of their own. My blanket was made of crocheted and knitted patches that I decorated with bits and pieces of my own. I tried to concentrate on the patterns so that I could forget about all the stuff happening around the house that was suffocating me. I gave the blanket to my daughter, and the joy she got from it convinced me that it had all been worth it – that I could create something special with my hands that other people liked and found pretty. Things that my husband would never appreciate.

‘My sons also got a blanket each, made from difficult patterns that really challenged my abilities, otherwise, I would have lost my mind completely.

‘Meanwhile, the situation had become unbearable. The verbal abuse slowly made way for physical abuse. I was pushed around and even kicked off the bed. At the beginning of 2017, Gerhard walked out on me. He initiated divorce proceedings.

‘I now live alone on the farm. I have trouble concentrating and I don’t do any crocheting at present.

‘As I was working on this story, I wondered how one would go about expressing 45 years of loneliness. How does one describe this incredible isolation, even – or especially – in a marriage? How do you fill this 45-year-old void?

‘This story is a summary of a life that was, in reality, just a burden. The knowledge that I have the ability to create beautiful things with my hands helps me to stay sane. It makes some days more tolerable.

‘At night, I sit on the veranda, smoke long cigarettes and drink coffee by the litre. I agonise over forgiveness, over redemption; I try to find answers from the stars above me. I hope that the Lord will provide some answers.’

Three weeks after our chat, Grietjie sent word that she was crocheting again and that she had completed a bedspread. It’s a cheerful piece in bold pink and shades of purple.

To make this ocean breeze poncho with its intricate pattern, visit the LAPA Publishers Blog.

* Not her real name