In the Midst of Wolves by Kurt Ellis – a dark psychological thriller set in Johannesburg
More about the book! 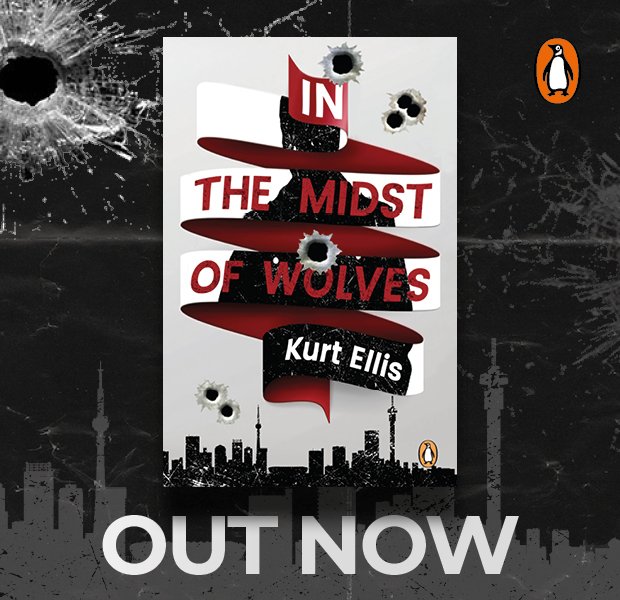 ‘… a monster that’ll have other monsters checking under their beds for him. That’s what Creed is, and he’s on our side.’

In the Midst of Wolves, the new novel by Kurt Ellis, is out now from Penguin Random House!

Back in South Africa after working with the FBI, he is haunted by his past mistakes, including the death of his fiancée. When a young woman is murdered and dismembered in her Johannesburg apartment, Creed’s long-time friend and head of the SAPS’ Investigative Psychological Unit, Major Eli Grey, enlists his help in investigating the murder – an attempt to save the self-destructing Creed from himself. But not all the Unit’s members welcome his involvement, and there are those intent on exposing his secrets while the murder is being solved.

The young woman’s community are convinced she was the victim of a witch called Nomtakhati, but Creed’s hunch points to an angry ex-boyfriend. Who, or what, is really behind the murder? Could it be Nomtakhati, who believes Nick Creed is uSatane?

In the Midst of Wolves is a dark psychological thriller about metaphorical demons from the past and the living monsters who target the innocent.

Kurt Ellis was born in 1983 in Sydenham, Durban. He escaped into the world of fiction from an early age. After he matriculated Kurt moved to Johannesburg to study English Literature. He won the Harry Oppenheimer Creative Writing award at Wits in his first year, before pursuing a career in sales. His debut novel By Any Means was published by Human and Rousseau in 2014, and went on to be longlisted for the Etisalat Prize for Literature. In the Midst of Wolves is his second novel. Kurt currently resides in Johannesburg with his wife and two children.