Hi teachers – My Word! Ideas for Creating a Writing Culture in the Classroom by Thérèse Hulme is out now
More about the book! 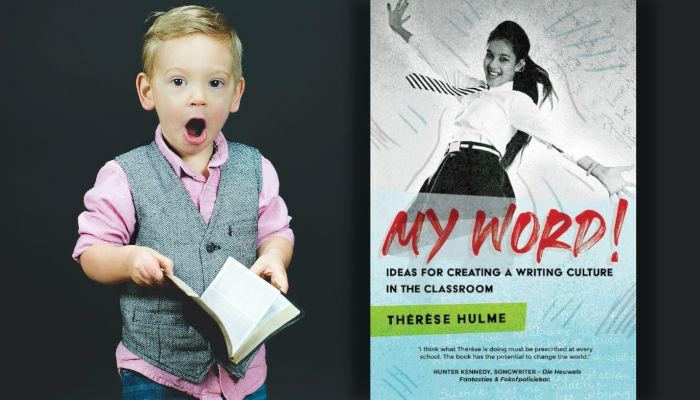 ‘I think what Thérèse is doing must be prescribed at every school. The book has the potential to change the world’ – Hunter Kennedy, songwriter for Die Heuwels Fantasties and Fokofpolisiekar

My Word! tells the stories of Thérèse Hulme and the young people she’s worked with over the last 17 years.

Thérèse has taught many learners in some of the most marginalised communities in the Western Cape how to write and how to find their voices. Her narrative approach will, in turn, inspire teachers to shape a writing culture in their classroom. The book contains many questions meant to help teachers critically examine existing practices and beliefs.

The book also has practical exercises for learners, questions for teachers to ponder and discussions meant to bring new insights to the CAPS goals.

It is especially the stories, poems, drama texts and spoken word pieces by the young writers that will capture readers’ imaginations.

For the past 17 years, Thérèse Hulme has been working as a narrative creative writing mentor to young people in marginalised communities in the Western Cape. The young people’s poems, drama and raps (via QR codes) also feature in the books. The young writers gave permission for their work to be shared in this way and, thanks to the support of the Jakes Gerwel Foundation, received payment for it. The book also contains the wisdom of teachers who supported the work and continued with it.