Friday Night Book Club: Read an exclusive excerpt from The Heron’s Cry – the new novel from Ann Cleeves, creator of Vera and Shetland
More about the book! 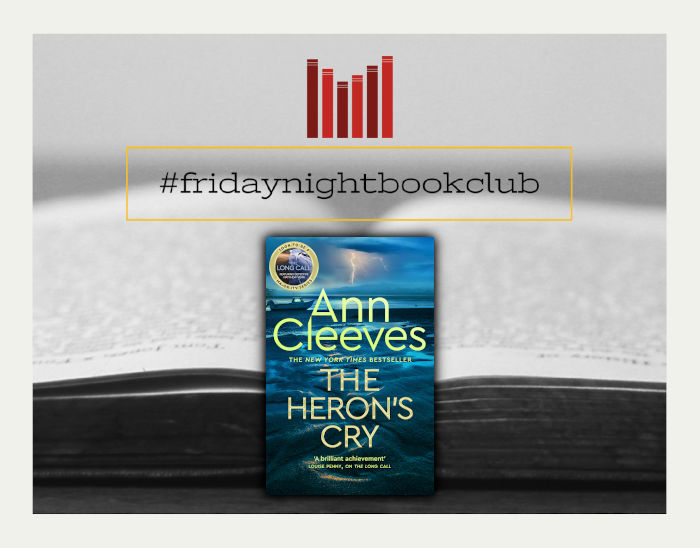 Treat yourself to a glass of wine this evening and this exclusive excerpt from The Heron’s Cry – the second novel in Ann Cleeves’s new Two Rivers crime series, following her bestseller The Long Call.

Two Rivers is the number one bestselling series featuring Detective Matthew Venn, from the creator of Vera and Shetland, and is soon to be another major TV series!

North Devon is enjoying a rare hot summer with tourists flocking to its coastline. Detective Matthew Venn is called out to a rural crime scene at the home of a group of artists. What he finds is an elaborately staged murder – Dr Nigel Yeo has been fatally stabbed. His daughter Eve is a glassblower, and the murder weapon is a shard of one of her broken vases.

Dr Yeo seems an unlikely murder victim. He’s a good man, a public servant, beloved by his daughter. Matthew is unnerved, though, to find that she is a close friend of Jonathan, his husband.

Then another body is found – killed in a similar way. Matthew finds himself treading carefully through the lies that fester at the heart of his community and a case that is dangerously close to home …

The Heron’s Cry
Chapter One

Jen had drunk too much. They were in Cynthia Prior’s garden, lounging on the grass, and it was just getting dark. The party had moved outside, become quieter and less frenetic. Jen could smell cut grass and honeysuckle, the scent intense, heady and oversweet. She found herself mesmerized by the rhythm of the flashing fairy lights that Cynthia had strung along the high brick wall and woven between the ivy and climbing roses.

Cynthia’s place was the kind of gaff to have a wall around it: a large detached house looking out over Rock Park, only a few hundred yards from Jen’s narrow terraced home, but a million miles in terms of class. Jen was a Liverpudlian and carried the idea of class with her like a badge of honour. Her dad had been a docker and her mother still stacked shelves in a supermarket.

Although it was dark, the air remained hot and the fire in the pit was there for effect, and to toast marshmallows, not because it was needed. They’d had an early heatwave. It was only the end of June but already there were calls for water rationing, talk of standpipes if the weather didn’t break soon. In North Devon, they weren’t usually short of rain.

Earlier, inside the house, there’d been loud music and, despite the warmth, dancing; Jen loved a good dance and could move like a demon. Her husband had disapproved, but she no longer had to care what he thought. Now they’d all drifted outside and Wes, one of Cynthia’s arty mates, was playing guitar, something moody and slow. Nobody could do moody like Wes. Jen had fancied him like crazy when she’d first met him, but then she fancied most of the single men she bumped into. She was a tad desperate. Wes was brooding, dark-haired and fit, the stuff of Jen’s dreams. Later she’d decided that a weed-smoking musician, who lived with a bunch of hippies in the hills, and supplemented his income by making weird furniture from driftwood, wasn’t the best fit for a woman with sole responsibility for two teenage kids. Who was also a cop.

Next to the wall a table had been set up and covered with a cloth. The cloth was Cynthia all over, and showed how classy she was. With the general exodus, Cynthia had brought out all the bottles and put them there, proving to the world that she was still organized and in control, though she must have had just as much to drink as Jen. Jen poured herself another glass of red and sat on the grass too. She told herself, and everyone else within earshot, that it had been years since she’d been to such a great party. Bloody years.

Later, only a small group was left close to the fire. Jen found herself talking to a middle-aged man, one of Cynthia’s neighbours. She’d seen him inside earlier, before they’d turned up the music, working the room, chatting politely to the other guests. He was small and sturdy, built like a troll from a fairy story, with a square head and short legs, and a wide smile that just prevented him from being ugly. Jen didn’t fancy him in the slightest, but everyone else seemed to have paired off, and she hated that sense of being the only single person in the group. Since her divorce the world seemed made up of happy couples. She even envied the ones who weren’t so happy. This man wore a checked shirt and walkers’ trousers, lightweight, easily dried. Jen could imagine him a member of a ramblers’ club. She thought he might be an accountant or a lawyer. Cynthia was a magistrate, sitting in the lower court, passing judgement on the petty criminals, the misfits and saddos, whom Jen was trying to convict, and she knew lots of lawyers. She and Jen had first met in court. Despite their different roles, they’d always got on. Cynthia’s husband was something important in the local hospital trust and she didn’t need a paid job.

Now, Jen was at that stage when she knew she’d had enough to drink, but she couldn’t quite stop. Her ex-husband had always said she had an addictive personality, the words spoken with a sneer and an edge of pity, just before giving her a good slap, and then blaming her for provoking him.

She thought Nigel had been holding the same glass of dry white for most of the evening.

‘So, Nigel. What do you do for a living?’ He’d already told her his name, slightly apologetically, as if it wasn’t a name to be proud of.

Nigel. Nigel Yeo. Yeo being a local name means he’s obviously from the West Country. Nigel ages him though. Who calls their kid Nigel these days?

Now she smiled, her best flirty smile. He might be older than she usually liked her men and was probably a boring sod, but chatting to him was better than sitting here on her own like a Billy No-Mates. Although Cynthia always said she shouldn’t try so hard and that the right man would come along eventually, Jen couldn’t bear the idea of being lonely for the rest of her life. Soon the kids would be flying the nest and she imagined her little house, as silent and cold as a grave, when she got in from work.

‘I work in the health sector.’ His knees were bent and she could see his shoes. Good quality, recently polished.

‘Oh, a medic?’ That made him more interesting. Jen might never want to think of herself as a snob, but she liked the idea of hanging out with a doctor.

‘Not any more.’ He smiled too, as if he knew what she was thinking, and again, there was something lovely about the smile, something that made up for the troll-like stature. ‘You could say I’m in the same line of business as you. Sort of. Though I’m more of a private investigator at the moment. In fact, there was something I wanted to discuss, but I’m not sure this is the right place after all.’ He seemed distracted for a moment. ‘Actually, it’s probably time for me to head home, I think.’ Nigel got to his feet, the movement smooth and easy, and wiped a few grass clippings from his bum. It was rather a nice bum too.

He hesitated when he was on his feet. ‘Is it okay if I get your number from Cynthia and call you?’

‘Yeah,’ Jen said. ‘Sure.’ She thought he might be suggesting a date and was flattered, almost excited, but it seemed he had something more formal in mind.

‘Work contact details will be fine if you don’t want to give me your personal number.’

She watched him walk away to say a polite goodbye to Cynthia. She felt ridiculously bereft, and that she’d missed an important opportunity for friendship.

The evening went downhill from there. She sat alone for a while with a beer, staring into the flames. When she saw Wes dancing slowly to music that he was humming and nobody else could hear, his arms round a woman young enough to be her daughter, she stumbled to her feet and walked home.