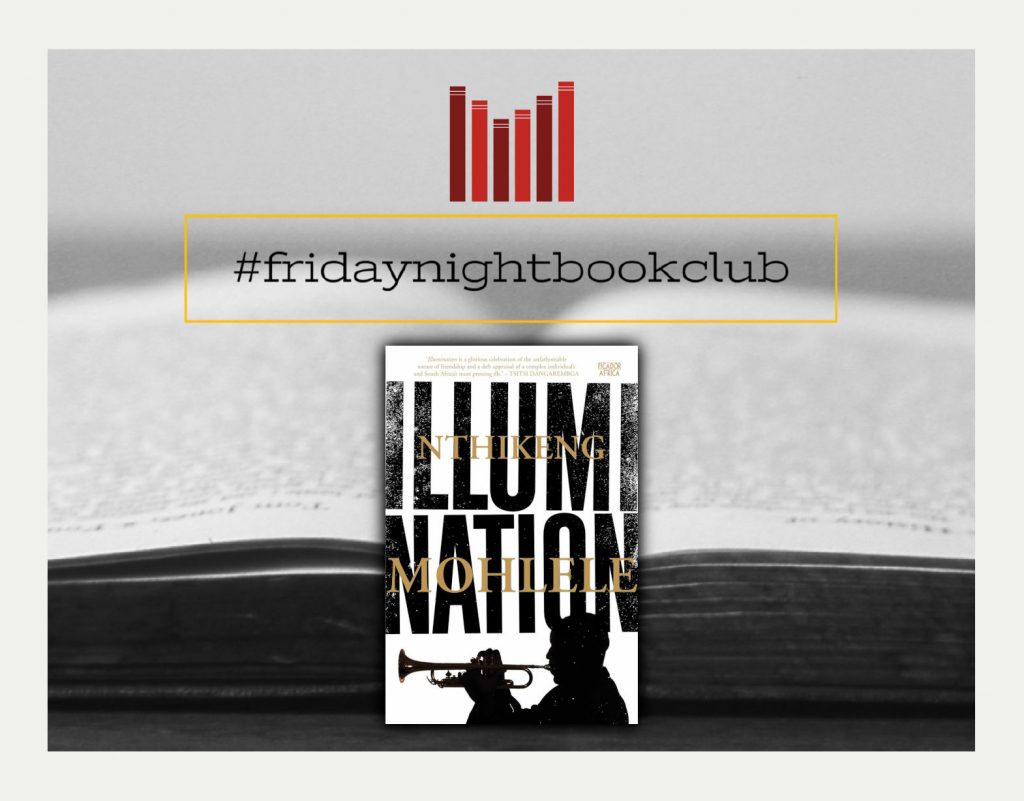 Staying in this evening? Settle in with a glass of wine, some good music, and this extended excerpt from Nthikeng Mohlele’s brand new novel Illumination – hot off the press!

Illumination is a glorious celebration of the unfathomable nature of friendship and a deft appraisal of a complex individual’s and South Africa’s most pressing ills.
– Tsitsi Dangarembga

Bantubonke is an accomplished and revered jazz trumpeter, composer and band leader in decline – an absent present and inadequate spouse. He lives for art at the expense of all else, an imbalance that derails his life and propels him to the brink of madness and despair.

A story of direct and implied betrayals, Illumination is an unrelenting study of possession and loss, of the beauty and uncertainty of love, of the dangers and intrusions of fame.

Cape Town is a cleaner city by far – or rather, cleaner where the rich exist, and less so where people and history have colluded and behaved shoddily since 1652. The same can be said of Johannesburg, of course, which has posh and exclusive addresses inhabited by those with swollen bank accounts, or people running all manner of errands for those with flourishing lives. I suppose the same can be said of New York or Madrid, Delhi or Lusaka: that is, that cities – concrete slabs and electrical wiring, regimented greenery and elaborate visions of town planners and architects – are incapable of perfection. It is true that Johannesburg has countless tourist spaces, but equally true that perhaps, as in London or Istanbul, a reality of embarrassing sights and sounds lurk both in the shadows and in full view. Millions of feet have traversed these hallowed and insignificant streets; millions of voices have chanted slogans and charged the air with electrifying oratory, voices of politicians and trade unionists, of poets and of clergymen, the shrill cries of women caught in a crossfire with police. Smoke once engulfed these streets and buildings, these grounds, from Braamfontein to Alexandra, Soweto to the Johannesburg CBD, which have borne newly ejected cartridges from all manner of firearms, the pavements greased and stained by blood that oozed from bullet wounds. Things were set alight: buses, trucks, buildings and human beings; and from all that was left – crackling, dying fires and soot, shell-shocked faces and many driven mad by loss and grief – I inherited a palpable and lingering sadness, the fury which I fed into my Smith Watkins and, in my younger days, into Yamahas and Monette trumpets.

I console myself that art is not only a gift but also an attempt at self-medication. I doubt that screaming and enchanted audiences know this, of course, or whether posturing cultural journalists with intellectual ambitions and pretensions think about the musical possibilities of a heated bullet cartridge forced out of the side of a pistol, smoky and hot, hammered and bruised, rotating mid-air as if to escape the consequences of that bullet head speeding to a target and, falling in anxious revolutions earthwards, bouncing off concrete or being buried in a soul, where it will await detectives and forensic investigators. I played notes like that sometimes. Notes like bullets. Notes aimed at assassinating my own failures, the lurking cancers of my art. Art is like that: at once restrictive and abundant, giving and reticent, so contradictory at times that it can birth ailments without any known diagnosis, leprosies and aches of the spirit, cancers that torture but don’t kill. I exist in the clutches of a beautiful and ugly history, a man tossed around by the deaths and redirections of culture in my determined battle to recapture an elusive time when I was at the height of my powers, when I could blow cosmic dust off the stars, when I was the high priest of the trumpet, of music. I was what you would call a public figure: double-page spreads in magazines, a regular on radio and television shows and, on occasion, a motivational speaker at universities and technical colleges on the craft and pitfalls of a musical life. In Soweto I coached aspirant trumpeters and guided talented but pompous bands on the humility demanded by music: a lesson I learnt many times over from Uncle Ambani’s mentors and protégés. That any fool could learn musical notes, but that it is the sacredness of music that differentiated musicians from mere entertainers, those with stale senses.

On Houghton Drive there is red house, a double-storey marvel almost concealed by topography and fern trees, on sunken ground as opposed to elevated, behind high walls and that beautiful gate with reflective metal plates, a gate that mirrors static and passing objects, faces and limbs of pedestrians. But this is not just a house; it is a cradle of sound, a clandestine meeting place for musical minds of the discreet kind. I have a particular fondness for the place, for the memories it jolts of countless midnight toils, of cold pizza and coffee as I winced at misplaced notes and tempos during rehearsals, the delirium of sleep deprivation, oppressive sleep that assailed me mid-rehearsal, as we celebrated and despaired, as we recorded The Anatomy of Sound, that near-perfect album of mine that critics have disrespected as ‘seminal’ or hero-worshipped as ‘profound’.

The album deserves the praise and accolades it received (anything to the contrary is not my worry); my angst is a nagging knowing that my mouth can no longer do justice to my intricate arrangements, that my visits to Afro Musica Recording Studios is as much an act of rediscovery as it is of mourning, grief over an artistic moment past. The studios belonged to Uncle Ambani, but have since changed a few hands following commercial deals and personal feuds and also, perhaps, the passage of time, known to alter and rearrange things silently. The yard is dominated by the red house – living quarters – and two or three outhouses that comprise the recording studio and some rehearsal rooms, concrete built and wooden floored, that open up onto a manicured garden and swimming pool, a pool I have christened the Devil’s Waters for the number of affairs and heartbreaks it has caused. It was not uncommon to find groupies and wives intermingling in one charade of social mixing and standoffs, not unheard of for a gun to be drawn or a stiletto’s heel to be nailed into some secret lover’s head by an enraged wife. But it has since calmed down, the rehearsal studios converted into listening rooms, and a no-nonsense sign posted at all major entrances: Afro Musica Recording Studios is a work space for artists. No other persons, accompanied or invited, may enter these premises without the express approval of Afro Musica management. And just like that, the space regained its creative ambience, but somehow lost its soul.

I live through a haze, a fog of artistic starvation and untraceable angst that is at times mild but at others overwhelming. I am not dysfunctional, not completely, but have become aware of peculiar sensitivities that were not a part of me before – or perhaps they were always there, and I was just too carefree or blunted to acknowledge them. This is not to say I have lived a life of oblivion – far from it – but rather that my senses have been awakened in admirable and at times extreme ways that makes it impossible to exist as a musician. It is as if I have stars orbiting the inner recesses of my skull, prompting a paralysis that numbs my wrecked lower lip, whose deformity taunts the trumpeter I once was. I avoid jazz clubs, dodge musicians I have known for years, and am exasperated by the sight of trumpets anywhere and anyhow: innocent drum majorettes practising on school grounds, six-or-so seconds of the police brass band on the evening news, or murals celebrating Sophiatown jazz bands.

All I have ever known, aspired to, dreamt of all my life has been music and, I find, I am lost without it. It feels as if I could reach into my deepest crevices, armed with chewing gum or sealants of whatever kind, and stop all the music streams dead in their tracks: to wean myself of musical ideas and possibilities, to scrub myself hollow, to imagine and reach for a totally new life devoid of anything resembling music, to finally accept that my bottom lip might never be restored to its original contours and reflexes, never be able to embrace the trumpet mouthpiece like it did in years past, never survive the glare and scrutiny of those celebrity photographers, the little circles they draw on the faces of famous people to magnify dental imperfections, blemishes and pimples, even snot. It is possible that the weight of fame has been eating away at me in small portions, eroding my sense of balance, my calling, for fame imposes obligations on those entangled in its web, however hard they try to break free. No one bothers plumbers and morticians with endless requests for photographs, autographs, subjects them to small swatches of laudatory conversation and restrained admonishing: how a particular song is perfect but too short, how I should smile more on stage, how I should consider answering calls from strangers because you just never know where that single phone call might lead. Fame is cumbersome, claustrophobic and intrusive. I have become a night prowler to obscure restaurants and cafés, but even there a waitress or someone recognises me, says: Oh my God! You’re him, right? I must be dreaming, oh my Lord, I think I am going to faint. Gonna die. Shit like that.

A story of unparalleled greed and western complicity – Dictatorland: The Men Who Stole Africa by Paul Kenyon

A memoir of an interracial relationship in South Africa: The Love Diary of a Zulu Boy by Bhekisisa Mncube

Simon Dingle explains Bitcoin, cryptocurrency and the journey to being your own bank in In Math We Trust: The Future of Money

Born to be Free: A beautiful tale about the irresistible call of the wild