Friday Night Book Club: Read an exclusive excerpt from Never Tell a Lie by Gail Schimmel
More about the book! 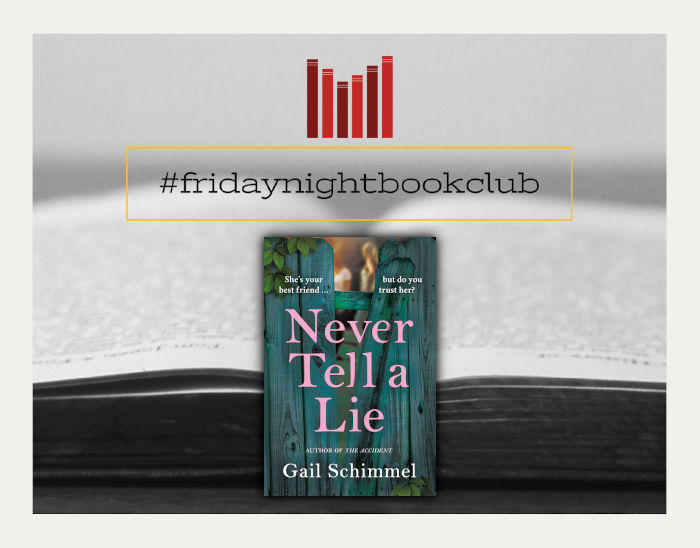 She’s your best friend … but do you trust her?

Treat yourself to a glass of wine this evening and this exclusive excerpt from Never Tell a Lie – the new novel from Gail Schimmel!

From the author of The Accident and Two Months comes the story of a whirlwind friendship – and the dark secrets lurking beneath it.

After a tumultuous marriage, Mary Wilson is happy in her uncomplicated life, focusing on her twelve-year-old son. She has always been content with her little family – but then she finds an old postcard that throws her past into question …

When her high school reunion comes along, Mary jumps at the chance of a distraction from the shock discovery, and meeting her old classmate, April, feels like a gift. Despite barely remembering April, Mary throws herself into the new friendship and finds her previously quiet social life reinvigorated.

But as the bonds between them are forged, Mary finds herself drawn further and further into April’s life and marriage, increasingly fearing that everything is not as perfect as it seems. Is her own painful past clouding her judgement, or is Mary right to suspect that the people she trusts most are the ones with the most to hide?

I am surrounded by books, and my father is nowhere in sight.

He started out helping me, but everything that I wanted to send to the charity shop he wanted to keep. After he told me that I couldn’t possibly give away a copy of The Lord of The Rings – even though he has three copies that we have found so far – I sent him to make tea. He took all three copies of the book with him, and hasn’t come back, so I suspect he’s reading it. Again. I wonder how he chose which copy to read.

As well as the challenge of how to decide what should stay and what should go is the challenge of my father’s habit of storing things in books: photos, letters, postcards, receipts, bills, old tickets. If it’s flat, he stores it in a random book. This means that as well as choosing the books to go, I must empty the book, and then decide what to do with whatever drops out of it. Mostly, it’s rubbish, but not all of it.

Between the pages of a water-stained copy of Black Beauty that not even the charity shop is going to want, I found a photo of my mother and me when I was a baby that I had never seen before. My mom died when I was two, so there are not that many photos of the two of us together, and I have looked at the ones in the album so many times that the images are burnt on my brain. This one is different. Mostly, in the photos we have, I am in the centre and my mom is kind of in the background, often out of focus. Which makes sense, because that’s how it is with a new baby – you’re taking photos of the baby, not the grown-ups. And especially then, when they had to use cameras with film and couldn’t edit and choose digital images until they were perfect. But in this picture, my mom is in focus and I am just a blur of face wrapped in a blanket and held in her arms. She looks beautiful – so young – too young to die a mere two years later – and her eyes are focused on something beyond me or even the camera, like she’s looking into her future and isn’t sure about what she sees, because there is a small frown on her otherwise smooth forehead. She looks, to my distress, unhappy.

I look to the back of the photo to see if anything is written there, but it’s blank, except for the dark remnants of paper, like it was glued in a photo album and removed. There is a space in my baby album where a picture was missing, and when I asked, my dad always said that he had no idea what it could have been. And now I seem to have found it. I feel pleased; triumphant even. I’ve solved one of the great mysteries of my childhood. I can’t wait to show my dad, and I put it carefully aside. I’m more motivated to check the books now; maybe I’ll find more pictures.

But mostly, it’s nothing. Receipts often, for groceries and things for his workshop. I mean, even these can distract me – reading the lists of what he bought, and thinking what must have been for me, and what age I must have been at the time. I think of my young father, recently widowed, buying food for his child. It’s no wonder all the church ladies came flocking to rescue him, despite the fact that he had no eyes for anyone except me. And recipes, written in my mother’s handwriting. Those stop me too, as I try to somehow intuit more about her, hidden in the loops of her y’s and g’s and her choice to write down that particular recipe.

I’m about to stop working and take the photo to show my dad when a postcard flutters out of the book that I’m holding. It’s not the first one; my father and his friend Greg seem to have a long history of exchanging postcards. At least, I presume they exchanged them – the ones that waft from these books have all been from Greg as he travelled around the world having adventures. Thinking about it, I realise that it may well have been one-sided – what adventures was my father having? ‘Mary slept through the night,’ he might have reported; or ‘Mary’s first day at school today!’ Hardly a match for Greg’s globetrotting fun.

I look at the postcard that has landed on the floor, picture-side up. It’s a picture of Big Ben, I think, and a bit tame for Greg, who usually sends either artworks or something obscure. The last one, which came out of a Terry Pratchett, was an advertisement for the Sex Museum in Amsterdam.

I flip over the picture, wondering if Greg will explain his unexpectedly pedestrian choice, like he has explained the more exotic ones.

But the handwriting is not Greg’s. It’s the unmistakable loops and curls of my mother’s script. This must be something from before they were married, I think fleetingly before I read it.

‘Dear Sean. I hope one day you will forgive me. I did what I had to do. I think of you and Mary every day. Love L.’

I read it twice, because it doesn’t make sense. I have made my father tell me everything that he can remember about the two years of my mother’s life with me. And he’s never mentioned them being apart. But she must’ve been away from us to send this postcard.

They must have had a fight, and she must have been gone for a bit. I suppose I can see why my dad wouldn’t tell me about something like that. You don’t want to speak ill of the dead, especially to their child.

I’m about to put the card down on the small pile of things that I plan to show my dad, and keep for myself, when I have an idea. I look at the card and see that, as I’d hoped, there is a clear date stamp: 24-11-1988. Only that’s impossible, because my mom died in 1984 of an aneurysm. One minute she was making pancakes, said my dad, and the next she was dead on the floor.

So she couldn’t have sent a postcard to my father in 1988, when she’d died making pancakes in 1984. Could she?