Friday Night Book Club: Read an excerpt from Turn a Blind Eye by Jeffrey Archer, ‘probably the greatest storyteller of our age’
More about the book! 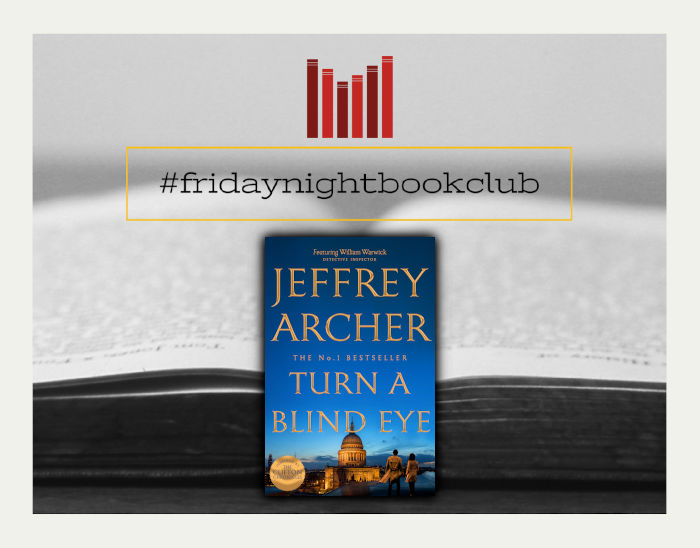 Treat yourself to a glass of wine this evening and this excerpt from Turn a Blind Eye by Jeffrey Archer, master storyteller and number one bestselling author of the Clifton Chronicles.

Turn a Blind Eye is the third instalment in the gripping story of Detective Inspector William Warwick.

William Warwick, now a Detective Inspector, is tasked with a dangerous new line of work, to go undercover and expose crime of another kind: corruption at the heart of the Metropolitan Police Force. His team is focused on following Detective Jerry Summers, a young officer whose lifestyle appears to exceed his income. But as a personal relationship develops with a member of William’s team, it threatens to compromise the whole investigation.

Meanwhile, a notorious drug baron goes on trial, with the prosecution case led by William’s father and sister. And William’s wife Beth, now a mother to twins, renews an old acquaintance who appears to have turned over a new leaf, or has she?

As the undercover officers start to draw the threads together, William realises that the corruption may go deeper still, and more of his colleagues than he first thought might be willing to turn a blind eye.

‘Probably the greatest storyteller of our age.’ – Mail on Sunday

‘If there were a Nobel Prize for storytelling, Archer would win.’ – Daily Telegraph

‘Give me one good reason why I shouldn’t resign,’ he said defiantly.

‘I can think of four,’ replied Commander Hawksby, taking him by surprise.

William could come up with one, two, possibly three, but not four, so he knew the Hawk had cornered him. But he remained confident he could break free. He took his letter of resignation from an inside pocket and placed it on the table in front of him. A provocative gesture, though he didn’t intend to hand it over until the commander had revealed his four reasons. What William didn’t know was that his father had called the Hawk earlier that morning to warn him that his son planned to resign, which had given the commander time to prepare for the encounter.

Having listened to Sir Julian’s sage words, the commander knew the reason Detective Sergeant Warwick was considering resigning. It hadn’t come as a surprise, and he intended to pre-empt William’s prepared speech.

‘Miles Faulkner, Assem Rashidi and Superintendent Lamont,’ said the Hawk, delivering his first service, but not his ace.

‘Miles Faulkner, as you know, is still on the run, and despite an all-ports alert, seems to have disappeared off the face of the earth. I need you to dig him out of whatever foxhole he’s hiding in and put him back behind bars where he belongs.’ ‘DS Adaja is well capable of doing that job,’ said William,
sending the ball flying back over the net.

‘But the odds will be considerably shortened if the two of you work together as a team, as you did during the Trojan Horse operation.’

‘If Assem Rashidi is your second reason,’ said William, trying to regain the initiative, ‘I can assure you that Superintendent Lamont has gathered more than enough evidence to make sure he won’t be seeing the light of day for several years, and you certainly don’t need me to hold his hand.’

‘That might have been the case if Lamont hadn’t resigned this morning,’ came back the commander.

William was taken by surprise a second time, and wasn’t given a moment to consider the ramifications of this revelation before the Hawk threw in, ‘He had to sacrifice his full pension rights, so he may not be entirely cooperative when it comes to giving evidence at Rashidi’s trial.’

‘He’ll be more than compensated by the cash he found in that empty holdall in Rashidi’s drugs factory,’ said William, not attempting to hide his sarcasm.

‘Not any more he won’t. Thanks to your intervention, every penny has been returned. And one thing’s for sure, I certainly don’t need two resignations on the same day.’

William was still puzzled as to what else the Hawk had up his sleeve. He decided to remain silent until the commander had delivered his third serve.

‘I saw the commissioner early this morning,’ Hawksby continued after a brief pause, ‘and he’s asked me to set up a new unit which will be responsible for looking into police corruption.’

‘The Met already has an anti-corruption unit,’ said William.

‘This one will be more proactive, and you would work undercover. The commissioner has given me a free hand to select my own team with the sole purpose of removing any rotten apples from the barrel, to use his exact words. He wants you to act as my point officer in charge of the day-to-day investigations, reporting directly to me.’

‘The commissioner wouldn’t know me from Adam,’ came back William’s baseline return.

‘I told him you were the officer behind the success of the Trojan Horse operation.’

‘Frankly, it’s a lousy assignment,’ continued the Hawk. ‘A lot of your time would be spent investigating colleagues who have only committed minor offences.’ The commander paused again before delivering his next serve. ‘However, following the Lamont incident, the commissioner is no longer willing to ignore the problem, which is why I recommended you.’

William couldn’t return his volley, and conceded the first game.

‘If you decide to take on the job,’ said the Hawk, ‘this will be your first assignment.’ He pushed a file marked CONFIDENTIAL across his desk.

William hesitated for a moment, well aware it was another trap, but couldn’t resist opening the file. DETECTIVE SERGEANT JR Summers was printed in bold capitals on the first page.

‘I was at Hendon with Jerry,’ said William. ‘He was one of the smartest lads in our intake. I’m not surprised he’s made detective sergeant. He was tipped for early promotion.’

‘And with reason. The first thing we have to do is find a credible excuse for you to get back in touch with him, so you can gain his confidence and find out if any of the accusations made against him by a senior officer stack up.’

‘But if he knows I’m a member of an anti-corruption unit, he’s hardly likely to welcome me like a long-lost friend.’

‘As far as anyone else in this building is concerned, you’re still working for the drugs squad, and preparing for Rashidi’s trial.’

‘Hardly the most tempting assignment,’ suggested William, ‘spying on your friends and colleagues. I’d be nothing more than an undercover grass.’

‘I couldn’t have put it better myself,’ said the Hawk. ‘But if it makes any difference, DS Adaja and DS Roycroft have already signed up, and I’ll leave you to select two new constables to make up your team.’

‘You seem to forget, sir, that DS Roycroft turned a blind eye when Lamont helped himself to that bag full of money following the Trojan Horse raid.’

‘No, she didn’t. DS Roycroft made a comprehensive report, for my eyes only. One of the reasons I promoted her back to sergeant,’ the Hawk responded.

‘Surely it should have been for everyone’s eyes,’ said William.

‘Not while it helped me convince Lamont not only to return the money, but to hand in his resignation.’

‘I’ll need to discuss your offer with Beth and my parents, before I make a decision,’ said William, taking a drinks break.

‘I’m afraid that won’t be possible,’ said the Hawk. ‘If you agree to take on this highly sensitive assignment, no one outside of this office can know about it. Even your family need to believe you’re still attached to the drugs squad and are preparing for Rashidi’s trial. At least that has the virtue of being true, because until the trial is over, you’ll be doing both jobs
at once.’

‘Can it get any worse?’ asked William.

‘Oh, yes,’ said the Hawk. ‘I’m informed by the senior visits officer at Pentonville that Assem Rashidi has a meeting booked this morning with our old friend Mr Booth Watson QC. So I’m bound to say, Detective Inspector Warwick, that what had looked like an open-and-shut case must now be considered to be hanging in the balance.’

It took William a few moments to realise that the commander had served his ace. He picked up his resignation letter and slipped it back in his pocket.

‘See you in a couple of days, Eddie,’ said Miles Faulkner as he got out of the unmarked van and began the only part of his escape that hadn’t been rehearsed.

He walked cautiously down the well-trodden path towards the beach. After about a hundred yards he spotted the glowing tip of a cigarette. A lighthouse that guided the escaped fugitive safely away from the rocks.

A man dressed from head to toe in black was walking towards him. They shook hands, but neither of them spoke.

The captain guided his only passenger across the sand to a motorboat that was bobbing in the shallow water. Once they were on board, a crewman switched on the engine and steered them out to the waiting yacht.

Miles didn’t relax until the captain had raised the anchor and set sail, and didn’t shout hallelujah until they were well outside territorial waters. He knew that if they caught him, not only would his sentence be doubled, but he wouldn’t be given a second chance to escape.