Friday Night Book Club: Read an excerpt from TJ Klune’s ‘simply perfect’ novel The House in the Cerulean Sea
More about the book! 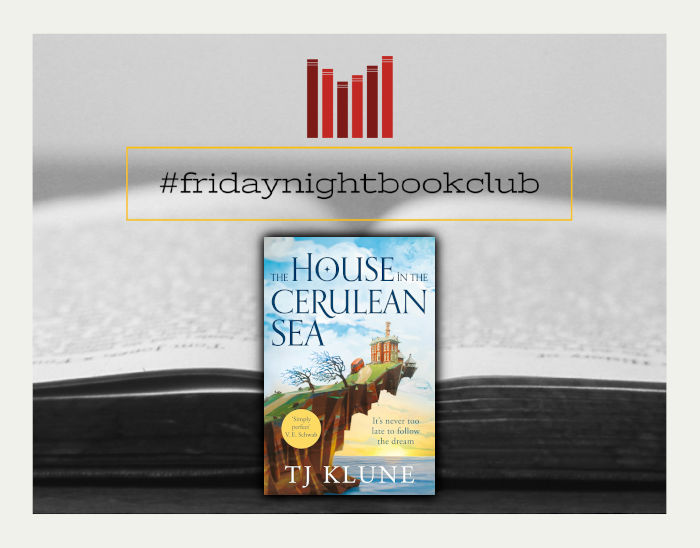 Treat yourself to a mug of hot chocolate this evening and an excerpt from The House in the Cerulean Sea by TJ Klune – an uplifting, heart-warming fantasy tale that’s become a New York Times, USA Today and Washington Post bestseller.

An enchanting story, masterfully told, The House in the Cerulean Sea is about the profound experience of discovering an unlikely family in an unexpected place – and realising that family could be yours.

‘I loved it. It is like being wrapped up in a big gay blanket. Simply perfect.’ – VE Schwab, author of The Invisible Life of Addie LaRue

He expected nothing. But they gave him everything …

Linus Baker leads a quiet life. At forty, he has a tiny house with a devious cat and his beloved records for company. And at the Department in Charge of Magical Youth, he’s spent many dull years monitoring their orphanages.

Then one day, Linus is summoned by Extremely Upper Management and given a highly classified assignment. He must travel to an orphanage where six dangerous children reside, including the Antichrist. There, Linus must somehow determine if they could bring on the end of days. But their guardian, charming and enigmatic Arthur Parnassus, will do anything to protect his wards. As Arthur and Linus grow ever closer, Linus must choose between duty and his dreams.

“Oh dear,” Linus Baker said, wiping the sweat from his brow. “This is most unusual.”

That was an understatement. He watched in rapt wonder as an eleven-year-old girl named Daisy levitated blocks of wood high above her head. The blocks spun in slow, concentric circles. Daisy frowned in concentration, the tip of her tongue stuck out between her teeth. It went on for a good minute before the blocks slowly lowered to the floor. Her level of control was astounding.

“I see,” Linus said, furiously scribbling on his pad of paper. They were in the master’s office, a tidy room with government-issued brown carpet and old furniture. The walls were lined with terrible paintings of lemurs in various poses. The master had showed them off proudly, telling Linus painting was her passion, and that if she hadn’t become the master of this specific orphanage, she’d be traveling with a circus as a lemur trainer or even have opened up a gallery to share her artwork with the world. Linus believed the world was better off with the paintings staying in this room, but he kept the thought to himself. He wasn’t there to engage in amateur art criticism. “And how often do you—er, you know? Make things float?”

The master of the orphanage, a squat woman with frizzy hair, stepped forward. “Oh, not often at all,” she said quickly. She wrung her hands, eyes darting back and forth. “Perhaps once or twice … a year?”

“A month,” the woman amended. “Silly me. I don’t know why I said a year. Slip of the tongue. Yes, once or twice a month. You know how it is. The older the children get, the more they … do things.”

“Is that right?” Linus asked Daisy.

“Oh yes,” Daisy said. “Once or twice a month, and no more.” She smiled beatifically at him, and Linus wondered if she’d been coached on her answers before his arrival. It wouldn’t be the first time it’d happened, and he doubted it’d be the last.

“Of course,” Linus said. They waited as his pen continued to scratch along the paper. He could feel their gazes on him, but he kept his focus on his words. Accuracy demanded attention. He was nothing but thorough, and his visit to this particular orphanage had been enlightening, to say the least. He needed to jot down as many details as he could to complete his final report once he returned to the office.

The master fussed over Daisy, pulling her unruly black hair back, fixing it in place with plastic butterfly clips. Daisy was staring forlornly at her blocks on the floor as if she wished they were levitating once more, her bushy eyebrows twitching.

“Do you have control over it?” Linus asked.

Before Daisy could open her mouth, the master said, “Of course she does. We’d never allow her to—”

Linus held up his hand. “I would appreciate, madam, if I could hear from Daisy herself. While I have no doubt you have her best interests in mind, I find that children such as Daisy here tend to be more … forthright.”

The master looked to speak again until Linus arched an eyebrow. She sighed as she nodded, taking a step back from Daisy.

After scribbling a final note, Linus capped his pen and set it and the pad of paper back in his briefcase. He stood from his chair and crouched down before Daisy, knees groaning in protest.

“Daisy? Do you have control over it?”

She nodded slowly. “I think so? I haven’t hurt anyone since I was brought here.” Her mouth twisted down. “Not until Marcus. I don’t like hurting people.”

He could almost believe that. “No one said you did. But sometimes, we can’t always control the … gifts we’re given. And it’s not necessarily the fault of those with said gifts.”

That didn’t seem to make her feel better. “Then whose fault is it?”

Linus blinked. “Well, I suppose there are all sorts of factors. Modern research suggests extreme emotional states can trigger instances such as yours. Sadness. Anger. Even happiness. Perhaps you were so happy, you accidentally threw a chair at your friend Marcus?” It was the reason he’d been sent here in the first place. Marcus had been seen in hospital in order to have his tail looked after. It’d been bent at an odd angle, and the hospital had reported it directly to the Department in Charge of Magical Youth as they were required to do. The report triggered an investigation, which was why Linus had been assigned to this particular orphanage.

“Yes,” Daisy said. “That’s exactly it. Marcus made me so happy when he stole my colored pencils that I accidentally threw a chair at him.”

She looked down at her blocks again, shuffling her feet. “Yes. And he said he wasn’t mad. He even sharpened my pencils for me before he gave them back. He’s better at it than I am.”

“What a thoughtful thing to do,” Linus said. He thought about reaching out and patting her on the shoulder, but it wasn’t proper. “And I know you didn’t mean him any harm, not really. Perhaps in the future, we will stop and think before we let our emotions get the better of us. How does that sound?”

She nodded furiously. “Oh yes. I promise to stop and think before I throw any more chairs with nothing but the power of my mind.”

Linus sighed. “I don’t think that’s quite what I—”

A bell rang from somewhere deep in the old house.

“Biscuits,” Daisy breathed before running toward the door.

“Only one,” the master called after her. “You don’t want to spoil your supper!”

“I won’t!” Daisy shouted back before slamming the door behind her. Linus could hear the little pitter-patter of her footsteps as she raced down the hall toward the kitchen.

“She will,” the master muttered, slumping down in her chair behind her desk. “She always does.”

She rubbed a hand over her face before eyeing him warily. “Well, that’s it, then. You’ve interviewed all the children. You’ve inspected the house. You’ve seen that Marcus is doing well. And while there was the … incident with the chair, Daisy obviously means no harm.”

He believed she was right. Marcus had seemed more interested in having Linus sign his tail cast rather than getting Daisy into any trouble. Linus had balked, telling him it wasn’t his place. Marcus was disappointed, but bounced back almost immediately. Linus marveled—as he sometimes did—how resilient they all were in the face of everything. “Quite.”

Linus bristled. “Absolutely not. You will be provided with a copy once I’ve filed it, as you know. The contents will be made clear to you then, and not a moment before.”

“Of course,” the master said hastily. “I didn’t mean to suggest that you—”

“I’m glad you see it my way,” Linus said. “And I know DICOMY will certainly be appreciative as well.” He busied himself with his briefcase, rearranging the contents until he was satisfied. He closed it and snapped the locks in place. “Now, unless there is anything else, I’ll take my leave and bid you—”

“That’s not always how it is with others like you.” She cleared her throat. “Or, rather, the other caseworkers.”

He looked at the door longingly. He’d been so close to making his escape. Clutching his briefcase in front of him like a shield, he turned back around.

The master rose from her chair and walked around the desk. He took a step back, mostly out of habit. She didn’t come any closer, instead leaning back against her desk. “We’ve had … others,” she said.

“Have you? That’s to be expected, of course, but—”

“They don’t see the children,” she said. “Not for who they are, only for what they’re capable of.”

“They should be given a chance, as all children should. What hope would they have to be adopted if they’re treated as something to be feared?”

He narrowed his eyes. “Something I said?”

She shook her head. “No, forgive me. You’re refreshing, in your own way. Your optimism is contagious.”

“I am positively a ray of sunshine,” Linus said flatly. “Now, if there’s nothing else, I can show myself—”

“How is it you can do what you do?” she asked. She blanched as if she couldn’t believe what she’d said.

Sweat trickled down the back of his neck into the collar of his shirt. It was awfully warm in the office. For the first time in a long time, he wished he were outside in the rain. “And what’s wrong with DICOMY?”

She hesitated. “I mean no offense.”

“I should hope not.”

“It’s just that…” She stood from her desk, arms still folded. “Don’t you wonder?”

“Never,” Linus said promptly. Then, “About what?”

“What happens to a place like this after you file your final report. What becomes of the children.”

“Who are still regulated by the government because of who they are.”

Linus felt backed into a corner. He wasn’t prepared for this. “I don’t work for the Department in Charge of Magical Adults. If you have any concerns in that regard, I suggest you bring it up with DICOMA. I’m focused solely on the well-being of children, nothing more.”