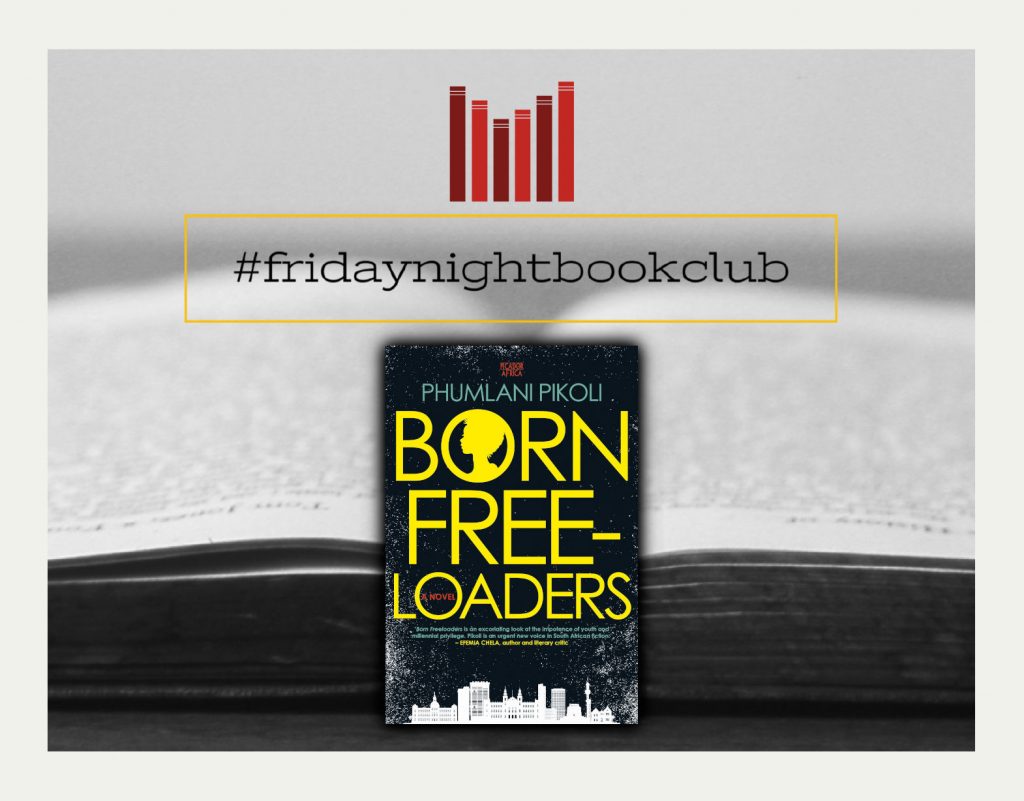 Staying in this evening? Get comfortable with a glass of wine and Born Freeloaders, the highly anticipated first novel from Phumlani Pikoli.

Pikoli is a multidisciplinary artist whose writing has been described as ‘a generational ode’. His first book, a collection of stories called The Fatuous State of Severity, was published by Pan Macmillan last year.

Born on the cusp of democracy, the crew of young friends in Born Freeloaders navigates a life of drinking, wild parties and other recklessness. The siblings at the centre of the novel, Nthabiseng and Xolani, have been raised in an upper middle-class family with connections to the political elite.

Nthabiseng is lauded by her peers as she whimsically goes through life, unable to form her own identity in a world that expects her to pick a side in the fractured classifications of race.

Xolani, not having known his late father, longs for acceptance from an uncle who sees him and his generation as the bitter fruit borne of a freedom he and countless others fought for. As the story moves across multiple spaces in the nation’s capital over a weekend, Born Freeloaders captures a political and cultural moment in the city’s and South Africa’s history. Interwoven is an analogous tale of the country’s colonisation and the consequences that follow.

And alongside the friends’ uneasy awareness of their privilege is a heightened sense of discomfort at their inability to change the world they were born into.

Uncle Zweli was Xolani’s father’s brother. He moved into the house when Nthabiseng was four and Xolani eight. He lived with their mother and Nthabiseng’s father, Graham, for some time. On Uncle Zweli’s arrival, Xolani believed he was seeing a ghost that had come to grant him his wishes. It was on an afternoon when he and his little sister had found some wood that the builders at the house had left out over the weekend. They had always wanted a treehouse, and their parents kept promising to build them one but never did. Ausi Linda had chased them outside to go play, while she cleaned the house. Their parents had left early and when the children realised that the building materials had been left lonely, they thought to keep them company.

While inspecting the wood and rumbling through some tools that they could use, they heard the gate opening, the car slowly driving down the winding driveway and parking in the carport next to the one that they had been preparing to build their house in. Their parents were first to exit, with smiles and hints at a surprise visitor. He stepped out of the car with small curls gelled to his head. On the sides of his face, his beard resembled lamb chops, with a smile that spread from one to the other. He shifted his weight onto one leg, took a drag of the cigarette held between his thumb, middle and index fingers, and looked at the pair whose work his arrival had interrupted.

Nthabiseng was puzzled by his sudden appearance. Xolani wasted no time, ran to him and leapt into his arms. Zweli caught the child who had screamed ‘Daddy’ at him in mid-air and held the excited little boy who had never met his father, swinging him around. His little sister found her brother’s enthusiasm infectious and she too wanted to enjoy the moment Xoli was having with the stranger. She too was lifted into the stranger’s arms and received kisses from him.

‘This is my daddy!’ Xolani told his little sister excitedly! ‘He’s finally home!’

No one had the heart to break the joy of the moment and so they let him believe it. When the illusion was shattered later that day, Xolani refused to believe the truth that was being forced on him. He never got completely used to the fact that the new presence in the house, who so closely resembled the face in the photo albums, was in fact his father’s younger brother and not his father. As time wore on, he played along with what everyone told him, but was convinced in secret that Uncle Zweli was his father.

Uncle Zweli always had a smile fixed on his face. He didn’t sleep very much, the pair noticed; always up at odd hours of the night fixing himself cups of tea and heading outside to smoke his special cigarettes, that smelled sour to their noses. Inside, he smoked normal cigarettes. Over time they began to register a certain stiffness from their parents when they spoke about Uncle Zweli’s special cigarettes and his ways after smoking one. He’d often ramble incoherently at the dinner table, or giggle to himself unexpectedly. Masechaba would often bring him back to the present moment with gentle interruptions. Before, everyone including Ausi Linda had laughed and joked about it. But increasingly the only adult who had continued to smile about the cigarettes was Uncle Zweli himself.

‘My children without tongues,’ Uncle Zweli would call the sibling pair.

‘We have tongues!’ Nthabiseng shouted at Uncle Zweli. He drained himself of a slow laughter at her petulance, took the children into the garden where he rolled himself a cigarette and told them a story as they all sat on the grass.

The Children without Tongues lived throughout the ages of humanity, stretching all the way back to the first people to leave the seas. In fact, they watched Fish emerge from water and turn into tree-climbing monkeys. They had helped with this transformation, in exchange for a promise that they in turn would be taught how to breathe underwater.

The Children trusted in the balance that governed the worlds of water and land. Without land, water could not exist as it served no purpose. And water could not exist where it was not needed. Water existed to give birth to land, as without water, land could not live. The sky had always made clear its capricious nature and The Children accepted its vacillations and their own restriction to the mountain tops.

When The Fish first surfaced with caution, seeking out the invisible presence of the air, it was to the great distaste of the ocean currents that sought to eternally cover The Fish and shield them from the air that sought to dry their scales. There were some Fish that submitted to the possessive nature of the currents. However, many of them continued in their efforts and it was into these turbulent waters that the fighting Fish released their eggs. The tiny Aquarians emerged from their bubbles with muscles that the school preceding them had been unable to develop.

As the passage of time eroded the rocks of the mountain, The Children found that the ground they inhabited had come closer to the ocean. The shortened distance gave them sight of the growing presence of silver beyond the edges of their shores. Mystery within arm’s reach had always been cause for investigation, with cessation from material animation an accepted part of each Child’s departure from home. Return belonged to those who left, and those who never left were never missed.

Some of The Children who had left returned home with tales of the new creatures being forged in the waters. Without hesitation, scores of Children lined the shores to investigate the waters from which they never drank. By the time they reached the shoreline – after a night’s walk – the morning sun slowly slithered over the bodies of the strange silver-scaled souls washed ashore. The silver beings wriggled and sputtered. Their bodies thrashed on the wet sand with a savagery that defied the morning’s serenity.

It was understood by The Children that these strangers to land needed to be thrown back into the froth from which they dribbled. A purely pity-laden instinct. The Fish that returned to the sea excreted eggs that hatched ashore. The creatures that emerged out of these eggs shrieked with a sonic nightmare born of lung and gill. The Children accepted that the years they had spent throwing The Fish back had made the strangers persevere and understood that The Fish desired to share the land.

The Children, therefore, anticipated that their own voyages beneath the surface of the water would be met with the same benevolence. The ear-piercing racket lulled into the temporal landscape, along with the land-incongruent features of The Fish. The Fish grew arms, then legs, before climbing trees. The phrase ‘Like a fish in the tree’ became a common reference for perseverance.