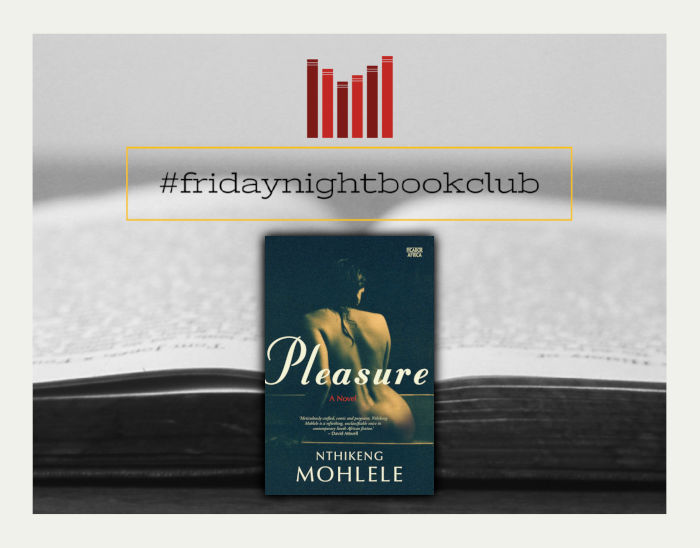 Staying in this evening? Get comfortable with a glass of wine and Nthikeng Mohlele’s novel, Pleasure.

Pleasure won the 2016 University of Johannesburg Main Prize as well as the 2017 K Sello Duiker Memorial Prize. It was also longlisted for the International Dublin Literary Award.

The notion of pleasure in all its guises is one of the oldest and most enduring grand themes of literature, presented here through the eyes and thoughts of writer and dreamer Milton Mohlele.

Drawn against the canvas of wartime Europe and modern-day Cape Town, South Africa, Milton sacrifices all for glimpses into the secrets and deceptions of pleasure – and how powerless those apparent insights are in the vast scale of life in its glory and absurdity.

The Dreamer in the Bathtub

I had, in the noisiest and most uncomfortable of beds in my late father’s Casablanca Estates apartment overlooking the sea, furnace-hot intercourse – of the mind and later of the body – with one Abella Beaudrie, a gorgeous visiting professor. My life is a concoction of humanitarian yearnings, artistic preoccupations, an avid collection of souvenirs, occasionally of the brassiere kind; an eternal death, dying in endless reincarnations – some deaths simple, others elaborate. After many false starts, detours, harrowing omissions, I still cannot tell for sure what, in the realm of pleasure, must be understood. Most men – not all, of course – welcome an opportunity to be pleasured by a woman. Not solely for the pleasure (because this can never be guaranteed, and there are tales of unintended consequences: a missed appointment, a sudden period, bodies stripped of clothes, their imperfections laid bare, becoming impenetrable fortresses), but for the possibilities that pleasure is able to birth: laughter, shared secrets, grave confessions.

Because pleasure is an occupation of mind, body and soul, it seems to me impossible to place burdens of proof on something so elusive – which forces me to focus on something equally deceptive yet present in both thought and action. I think of pleasure as a slave to the imagination. It can, at the whim of the imagination, be either passive or delayed. When delayed, reserved for appropriate moments, for answers from would-be companions in courtship, the very existence of unconfirmed possibilities can itself be pleasurable: something as mundane as observing a stranger skilfully eat pasta, for instance.

Pleasure’s glow, its very essence, remains experienced and yet not fully comprehended. It seems to me that all of life is one long quest: an attempt to own pleasure, imprison it, distort or bend it to breaking point, to invent and birth its new variations. Even pleasures of the brutal kind, those that mark and chew and deform. The problem with pleasure – whether experienced, sought or imagined – is the sheer scale of it, its variations, the endlessness of it all. Be it admiration for an aesthetically pleasing human form or the sensation of sleep, the itch of a healing wound, the mental image of a bowl of strawberries or moist breasts, a lone penetrating voice that rises and falls during those mass choir toils, the warm and sustained applause that follows, or Professor Beaudrie ending her lectures on ‘Sexuality and Modern Societies’ at the Culture Institute with a considered and delicious: Donc, il paraît que l ’érotisme restera très longtemps avec ’être humain – So, it seems the erotic will be with humans for a very long time to come.

Abella says, in the privacy of our noisy bed, ‘Thank you, universe, for all things lascivious.’ Merci, l’univers, pour tout ce qui est lascif. Charming linguistic registers, the French language. Pleasurable. Like Sepedi, which when spoken equates to licking and biting into sweet plums, being tickled with a feather down the spine. Maybe that is what must be understood: that life should be both lived and imagined. Like the long-abandoned French villas I imagine Abella exploring, this middle-aged, sensual academic with erotic sensibilities who would still be beautiful even if she answered to Babineaux or Blanchett, Monet or Paquet. It is amusing that pleasure continues to prance and dance around me without the slightest disquiet: children worshipping their ice-cream cones at the boardwalk, the jewelled birds that frequent my pot plants for unknown reasons, the satisfying trickery of a sudden sneeze, the aroma of coffee brewing in offices brimming with thoughts and laughter, beautiful women wrestling errant umbrellas and summer dresses in rainy gusts. The pleasures of a humid evening on a restaurant deck, kiss- related contentment of strangers, delights brought about by private thoughts, the satisfaction of yawning and crackling bones after a long sleep.

There are also perverse pleasures, pleasures savoured in concealment. It is when the concealment fails, or the betrayal of that concealment – which is not the same as it failing, that dungeon doors are locked, that the afflictions of conscience emerge. I repeat: the totality of existence seems to me to be the pursuit of pleasure; from the mundane to the mesmeric, from the mesmeric to the weighty, which are but stepping stones to far more rare and precarious pleasures. The higher one climbs the pleasure ladder, the heavier the burdens of conscience – which is understandable, but still without remedy.

My official documents state my names as Milton Moremi Mohlele, though I am known simply as Milton. I am studious, a literary slut of sorts: solitary, cerebral, mysterious. And divorced. Some ladies, even the most reserved ones, gather courage to compliment my quiet nature and, on occasions but very rarely, wake up in my bed, prance to the bathroom in the nude, curious but content: Alexis, Abella, Masechaba visit, bearing gifts, their hearts on fire.

I am older now – wiser, I suppose, more philosophical about nocturnal feminine giggles. I have kissed a lot of women in my life, filling in a mental kissing register with patience and panache until the last of the beautiful women is charmed, cornered, caressed, kissed. Many want to offer much more, but I politely decline, to their utter frustration and bewilderment. Kisses are safe preoccupations and, if properly practised, manageable. They have the potential to illuminate hearts without dimming the imagination, which once properly cultivated is a source of unparalleled and limitless pleasure. I am not a womaniser, not in the truest sense. What is womanising, anyway? Is it the crude pursuit of rudimentary lusts or something much more vulnerable: a burning desire to belong? Is it a science of sorts that establishes and discards rules as and when convenient? Is it in its truest sense an elusive charm, a craft at once detested but somehow tolerated, sought, envied even?

I am neither loved nor universally admired, but I am, within the confines of my profession and track record, respected. I enjoy a modest but weighty fame: television appearances, me discussing all manner of things – ranging from goings-on in the theatre circuit, a drop in film standards, illiterate book reviewers. But mine is a dry kind of fame: a quick nod my way from complete strangers, a hesitant wave of the hand, conspiratorial nudges from passing lovers; it is a bland fame, unlike that reserved for rock stars in leather pants, the kind that urges throngs to erupt into stampedes and succumb to uncontrollable heart palpitations, panty throwing and fainting spells.

I notice things. Even the smallest, most insignificant of them: colour contrasts on the buttons of a blouse, dust particles settling on gravestones. I notice shadows in magazine images, rust in the inner workings of jumbo-jet wings, steam shot from boiling kettles and suddenly dissipating into nothingness, the varying shapes of sugar granules, the faint nerves on my lovers’ eyeballs. I take note of toothbrush designs, colour combinations, toothpaste residue hiding between the brush fibres; I pay attention to the curvature of moon phases, idle tomatoes changing complexion from salmon to blood red, Abella’s pubic hair coloured a rusty brown by urine and time. I observe the wing patterns on murdered mosquitoes, raindrops on the patio tiles, the wheezing sounds made by babies sucking on emptying bottles, low-decibel groans of mattress springs when I cannot sleep, the wind sweeping prayers from the mosque on Twelfth Avenue. I notice fat-content readings on food labels, thread counts and symmetry on tablecloths. I dream the most daring and colourful of dreams, the interpretations of which may occupy me for weeks if not months on end. It is perhaps true to say that I admire my dreams, that I am at times unsettled by them, and have a fear that one day they will vanish, simply dry up. I don’t know why this is so. I have, in the absence of a convincing answer, simply submitted to the most logical of stances: that some dreams are more colourful than others.

I have a brother, Bull, younger by eleven years, who has for some reason never found it important to lead a respectable life. Both my parents are late, of natural causes (kidney failure, heartbreak), and rest at the Melrose Cemetery, where I seldom visit, but when I do I do so in the company of Milton and Rilke. I drive Father’s cream 1984 Mercedes, lacking in the luminance associated with pricier vehicles, am a practising vegetarian, a lover of goat’s milk, and keen observer of women in various stages of anger or arousal. If you had asked me, when I was eight or nine, what I wanted to be when grown, I would without hesitation have said, ‘A policeman.’ I have, even from that tender age, found the concept of handcuffs fascinating – how the accused surrenders all individuality, wrists cuffed behind his back, overwhelmed by the machinations of justice. In my imagination, the accused were – strangely – always men; it never occurred to me that women could commit crimes. But, apart from reading English and German poets in graveyards, I cannot say I have any other eccentricities. Perhaps I do, and they have simply not been pointed out to me, or are not prominent enough to warrant attention.